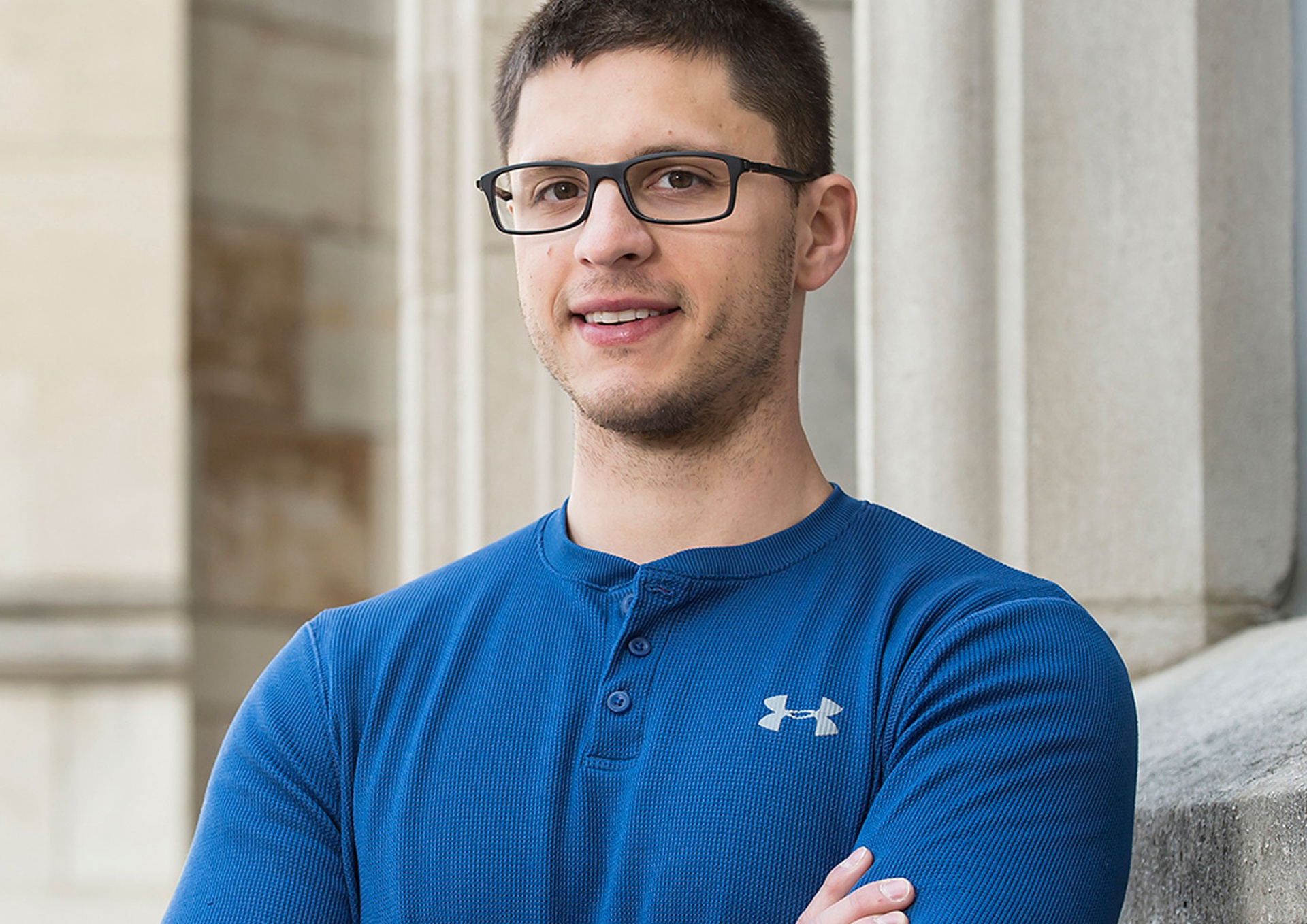 As an 8-year-old boy, he and his cousin found a load of bricks and built a small house in the backyard of his grandparents’ home in Pittsburgh’s Swissvale neighborhood. He helped his cousin build their own version of a Demon Drop — a free fall amusement park ride — from the top of a backyard swing.

“We tested it out on his younger brother,” Matelan said.

His journey to Pitt came by way of the U.S. Marines. Matelan knew by ninth grade he wanted to be part of the Band of Brothers. He spent summers installing carpet with his uncle, who had been a machinist in the Marine Corps, and whose stories were enticing.

“If you’re going to join, you may as well join the best,” Matelan said. He left immediately after graduation from Gateway High School for recruit training in Parris Island, South Carolina. Now, decades after his childhood building forays, Matelan graduates from the University of Pittsburgh with a bachelor’s degree in civil engineering, with hopes of working on a structural transportation project someday. Roads and subway systems interest him the most.

Matelan’s five years in the military were an exciting whirlwind of being on a security guard detail for world leaders and other VIPs who would visit embassies throughout Europe and Asia. He and the other Marines in the detachment assisted the Secret Service with security sweeps before and after visits and provided 24-hour protection of the sites.

His adventures included guarding the likes of then Secretary of State Hillary Clinton twice in China and once in Croatia; President Jimmy Carter and his wife in China; and President Barack Obama and his wife in Ireland, with additional assignments in Japan.

In fact, the young Marine was on duty in May 2011 inside the U.S. Embassy in Dublin when one of President Obama’s heavily-armored touring limousines “bottomed out” on the uphill exit ramp with a loud clang and actually got stuck for a while.

“We heard the noise from inside but had no idea what had happened at the time,” said Matelan.

The limo was carrying Secret Service staff and personnel. The Obamas were in the limo behind the stuck car. After the incident, the Secret Service released a statement that said the limo’s occupants switched to other vehicles and the entire motorcade exited the premises via another driveway. The stranded limo was freed by technicians after about 15 minutes.

By late 2013, Matelan’s tours were over, and he returned to the United States and applied to a number of universities. Pitt was the first one to respond, so he enrolled the following January in the College of General Studies.

As a sophomore, he transitioned into the Swanson School of Engineering. That’s when he heard from Pitt’s Office of Veterans Services that he had been nominated for and won the Lester C. Snyder, Jr. Scholarship in the Department of Civil and Environmental Engineering, which is given to engineering students with a history of military service.

Nonetheless, Matelan found the transition from a global career at U.S. embassies to sitting in a classroom a little tough.

But he persevered and was successful, which came as no surprise to Master Sergeant Chris Hoenig, who supervised Matelan in Croatia.

“David is self-driven and takes the initiative to improve upon things in his scope of work to make them run smoothly,” he said.

“The real-world knowledge on that team was invaluable,” he said.

Now there’s been a job offer from the company, which Matelan is considering. With his education in leadership, focus and time management as a Marine, coupled with his Pitt schooling, he has the tools for a smooth transition.