A Better Way to Separate Isotopes 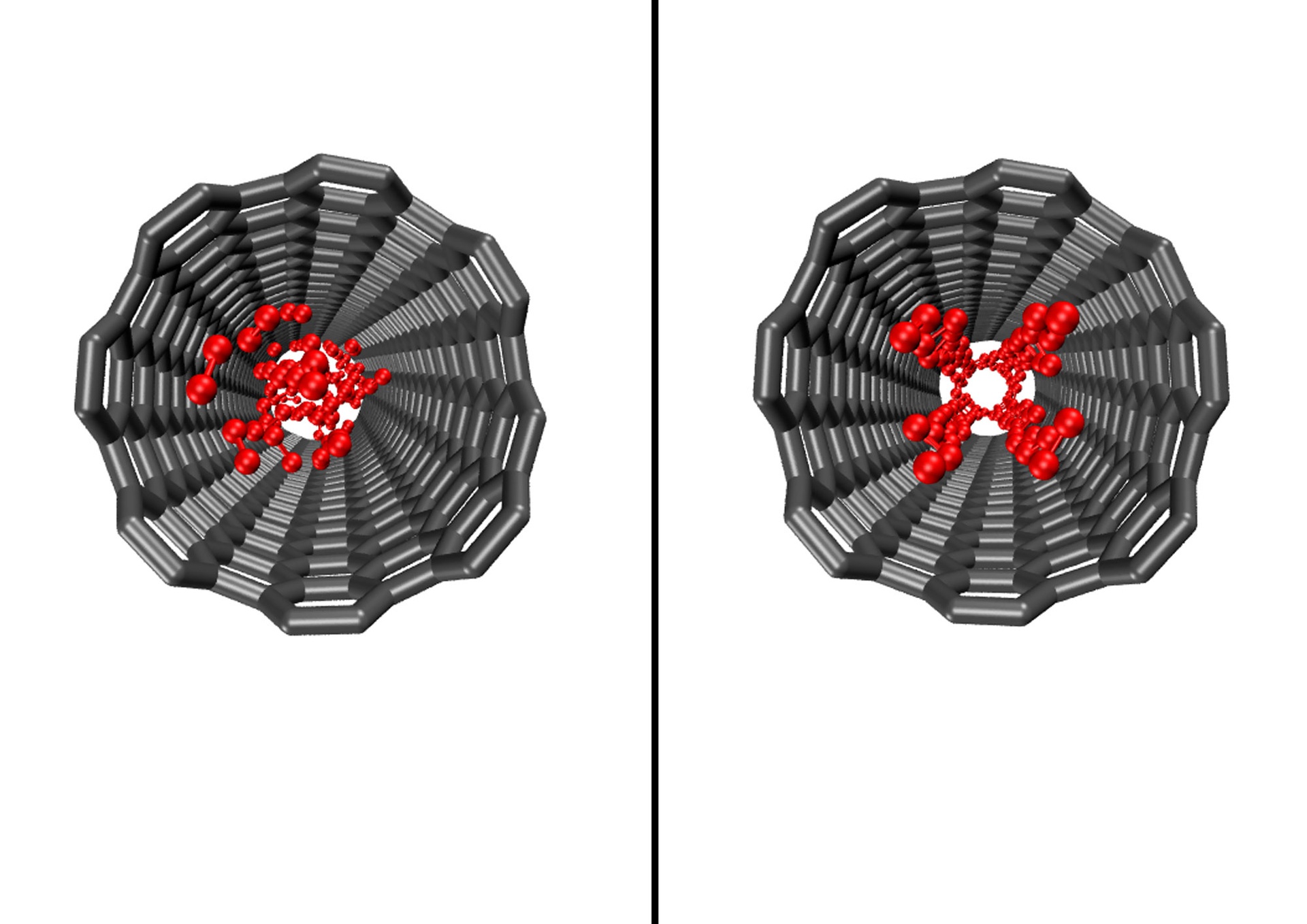 A new method of separating oxygen isotopes uses a material in which the molecules arrange themselves to make separation easier. (Credit: Abhishek Bagusetty)

PITTSBURGH (Jan. 27, 2021) — Imagine a bin full of basketballs, all the same size and color, differing only by a tenth of an ounce in weight. Separating the heavier basketballs would likely be a difficult and tedious task, even with the right equipment. This is similar to the problem of separating isotopes, such as oxygen-16 (16O) and oxygen-18 (18O); they have almost identical properties, so they are very difficult to separate.

Isotopes like these are extremely valuable for a wide variety of applications like medical imaging and radiopharmaceuticals. This is the case with 18O, which makes up only 0.2 percent of the oxygen on earth. But generating pure 18O is very expensive, driving up the costs of medical applications.

New research reported in Nature Communications introduces a novel way to separate oxygen isotopes that is less energy-intensive and expensive than conventional methods. An international team of researchers led by Shinshu University in Japan introduced a new method using a material made from carbon having subnanometer pores, making it much easier to isolate the heavier oxygen isotopes.

“Oxygen molecules are relatively heavy, so adding one or two neutrons does not make a huge difference in weight. That makes them more difficult to identify and isolate,” explained Karl Johnson, William Kepler Whiteford Professor of Chemical and Petroleum Engineering in the University of Pittsburgh Swanson School of Engineering and co-author of the paper. “We discovered that when you crowd oxygen molecules together very tightly in a porous material, they self-organize in such a way that the difference is magnified, and it’s easier to separate them.”

Current distillation-based methods are expensive and require a huge amount of energy, as they cool the gas until it forms a liquid and then boil off the oxygen molecules in very large distillation columns. The new method would instead use a porous material made from carbon in a relatively small adsorption column—a technology already widely used in industry—to separate the molecules.

“It’s not a new technology, just a new material,” added Johnson, who noted the method is well-suited to industry use.

Yury Gogotsi, Distinguished University and Bach Professor of Materials Science and Engineering at Drexel University, who developed this sorbent known as carbide-derived carbon, highlighted the importance of this new material.

“To be able to separate isotopes, one needs not only tune the pore size with sub-nanometer accuracy, but also make all pores of about the same size,” said Gogotsi. “This is nanotechnology in action.

Johnson’s lab was charged with developing a theoretical explanation of the experiments performed by senior author Katsumi Kaneko, distinguished professor at Shinshu University in Japan.

“This project has demonstrated the importance of fruitful collaboration for the creation of new science,” said Kaneko. “I’m delighted to have colleagues like Yury Gogotsi and Karl Johnson who can provide new materials and theoretical explanation of the separative adsorption behavior of subnanometer carbon pores for 18O2 and 16O2.”

The paper, “Adsorption separation of heavier isotope gases in subnanometer carbon pores,” (DOI: 10.1038/s41467-020-20744-6) was published in Nature Communications. Research was led by Shinshu University’s Sanjeev Kumar Ujjain and Katsumi Kaneko and is a collaboration between nine institutions, including Pitt.

A Better Way to Separate Isotopes