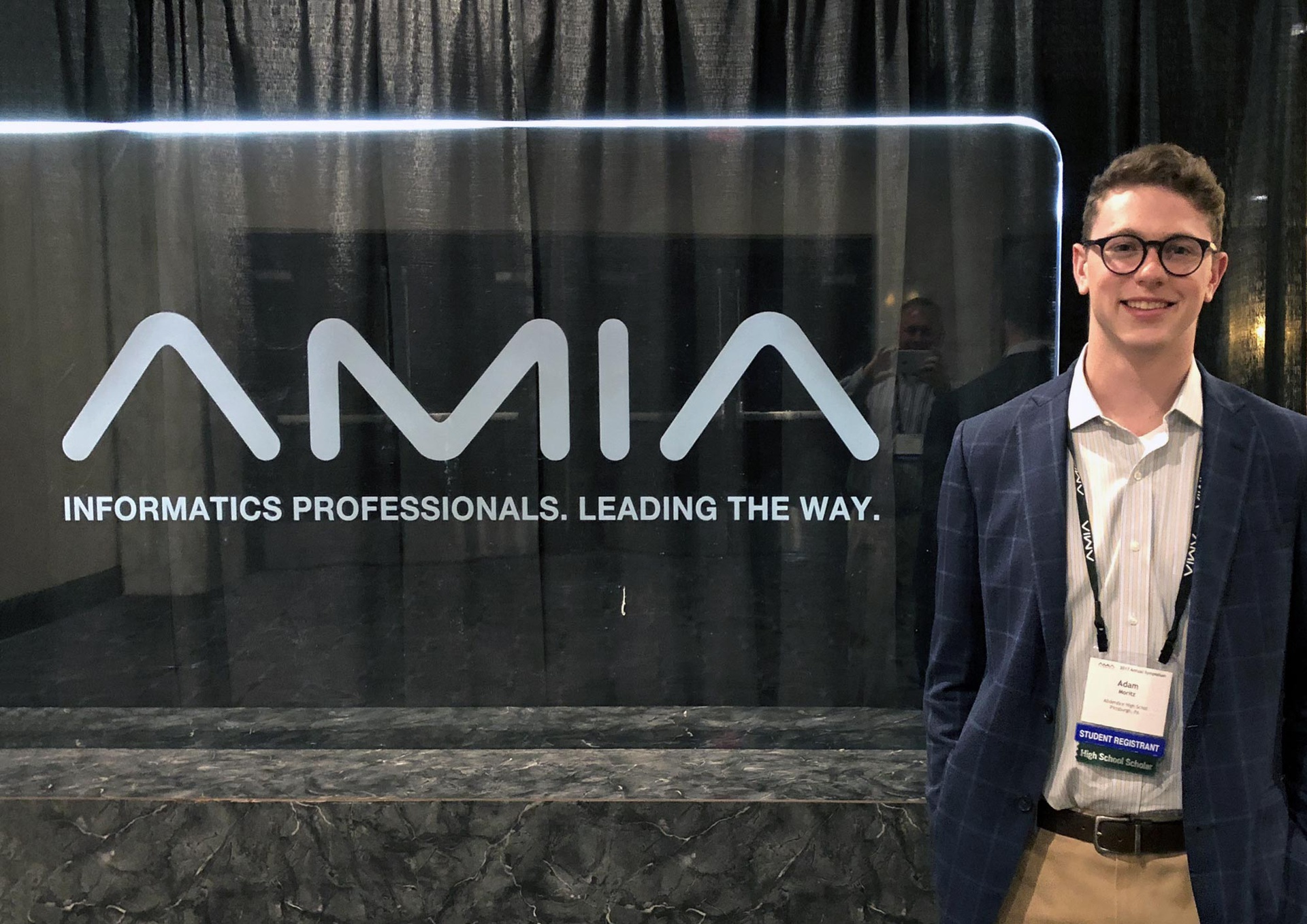 PITTSBURGH (February 20, 2018) … Pittsburgh-area high school students have an opportunity to contribute breakthrough medical research, train for careers in STEM fields, and on rare occasion, present their work at international forums for leading researchers and professionals.

Adam Moritz, a senior at Taylor Allderdice High School in Squirrel Hill, is presenting his research from the University of Pittsburgh Computer Science, Biology and Biomedical Informatics (CoSBBI) program to the Biomedical and Health Informatics 2018 (BHI ’18) conference in Las Vegas, Nev. this March.

“Adam worked on writing machine learning algorithms to interpret data about patients’ swallowing mechanisms,” said Ervin Sejdić, associate professor of electrical and computer engineering at Pitt’s Swanson School of Engineering. “There are more than 100 neuro-muscular events taking place during each swallow, which typically lasts less than a second, so it’s a fairly complex mechanism.”

Dr. Sejdić holds a secondary appointment in bioengineering and studies swallowing difficulties called “oropharyngeal dysphagia.” He and his team use accelerometers and microphones placed outside the throat to collect data about what’s going on inside.

People with dysphagia risk inhaling food or liquid and developing an infection called aspiration pneumonia. The potentially fatal condition is prevalent in up to 75 percent of patients in acute care and nursing homes; affects half of the annual 800,000 U.S. citizens who suffer from stroke; and adds nearly $500 million to U.S. health care costs per year.

“Adam’s research shows a machine can make distinctions between thick and thin liquids based on our recordings of patients swallowing. His work contributes greatly toward our understanding of dysphagia and how different variables affect the data from the recordings,” said Dr. Sejdić.

Dr. Sejdić supervised Moritz during the program and advised Moritz to submit his research to the Institute of Electrical and Electronics Engineers (IEEE) BHI ’18 conference.

“It’s not very common for a high school student to have a research paper accepted at a conference like BHI,” said Dr. Sejdić. “He may be the first one.”

The CoSBBI program is part of the larger UPMC Hillman Cancer Center Summer Academy, which provides high school seniors with eight weeks of research-focused learning at six laboratory sites. At the end of the program, participating scholars present their projects as oral presentations and in a poster session.

“The UPMC Hillman Cancer Center Academy gives a diverse group of students the opportunity to participate in authentic and impactful research under the mentorship of University faculty and trainees, like Dr. Sejdić, who are the champions of the Academy and give selflessly of their time, effort, and resources,” said Dr. David Boone, executive director of the Academy and assistant professor of biomedical informatics at Pitt. “We are proud of Adam and all of our students. In addition to presenting at national symposia, many students have also published research papers in peer-reviewed journals, have won prestigious science fairs, awards, and scholarships, and have continued research as they enter college.”

“I knew I wanted to do something academically last summer. When my teacher told me about the summer academy, it really caught my eye as a unique opportunity,” said Moritz. “I didn’t really have a lot of experience in research, but I knew I wanted to try it.”

Moritz continues to work with Dr. Sejdić and explore how machine learning can benefit dysphagia research as part of his AP Research course at Allderdice. After graduation, Moritz plans to study computer science and math in college. In the meantime, he is taking advantage of how research helps him prepare for college and a future in STEM.

“There are a lot of times when the next step of the research isn’t clearly mapped out for me, so I have to teach myself how to continue. It’s more of a fluid learning experience than typical classroom learning,” said Moritz.