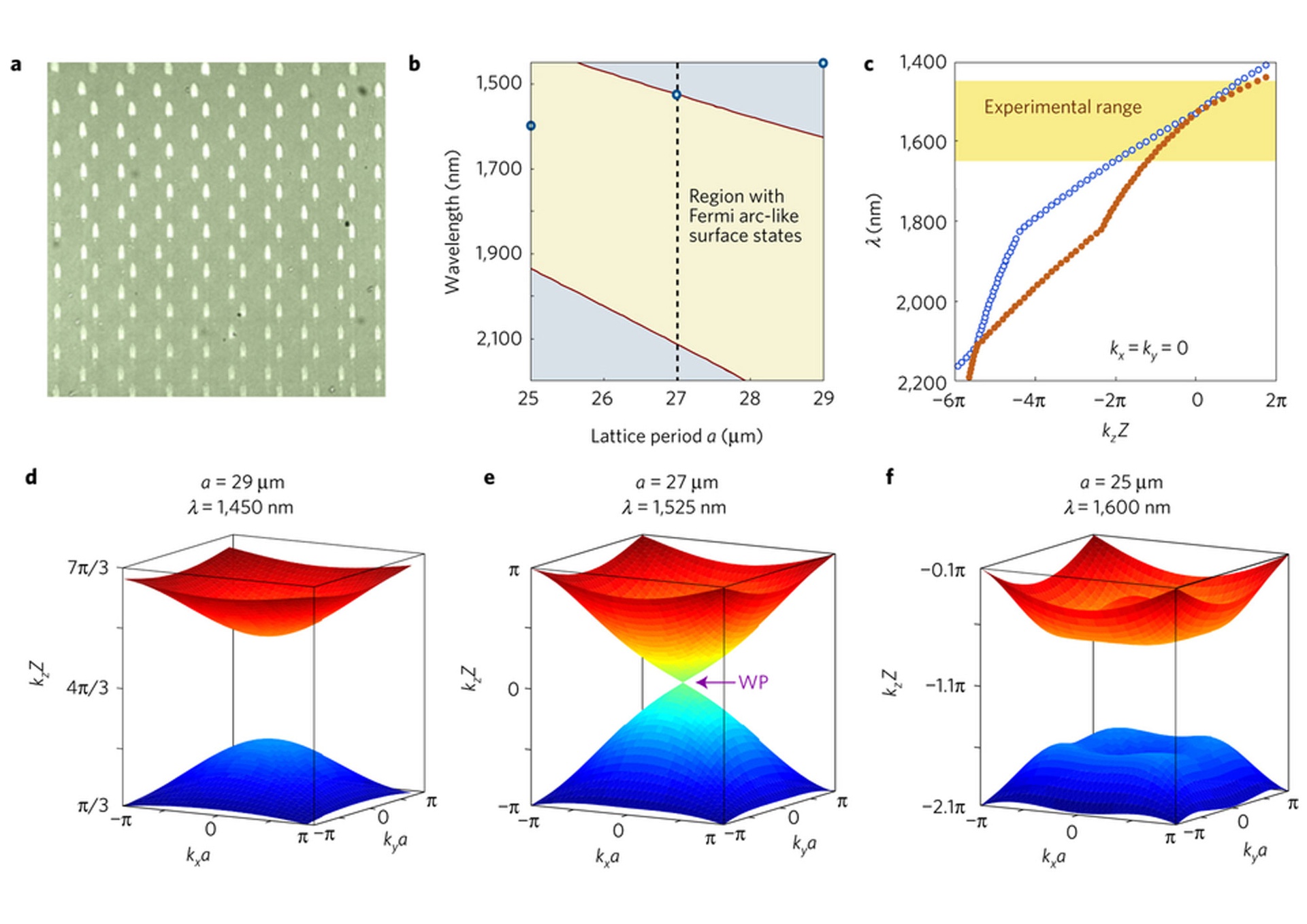 Topological states of matter can exhibit a range of unique quantum phenomena that are of interest to various fields of classical physics, such as acoustics, mechanics or photonics. Although a number of these topological states have been successfully emulated in photonics, their application has been restricted to certain frequencies. Most topological properties have been demonstrated in two-dimensional (2D) systems; however, a variety of new topological properties have been predicted for three-dimensional (3D) systems. The study published in Nature Physics marks an important step by emulating Weyl points, which constitute the simplest possible topologically nontrivial band structure, in three dimensions.

Weyl fermions are massless spin-1/2 particles that arise in the form of quasiparticle excitations. The band structure of Weyl materials exhibits conical valence and conduction bands that touch at a single Weyl point, which carries a topological charge. Weyl points are surprisingly robust with respect to perturbations, which, whether global or local, can only shift the Weyl point and not lift the degeneracy between the bands, implying that the conical dispersion will persist. Such materials also have exotic topological excitations on the surface, with a dispersion referred to as a Fermi arc due to its distinct shape. Such arcs interconnect a pair of Weyl points of opposite charges in reciprocal space.

To realize the optical equivalent of Weyl points and Fermi arcs, the authors exploited a platform that has already been proven to be extremely versatile and fruitful for topological photonics in the context of Floquet topological insulators. The system comprises a periodic array of optical waveguides, fabricated by direct laser writing inside a glass slab. The hopping between different waveguides can be controlled by tuning their separation. A helical shape provides an additional modulation in the z-direction, making the structure truly three-dimensional. The Weyl dispersion thus engineered could be probed by coupling an optical field to the system and imaging lateral field distributions along the xy-cuts of the structure near the frequency of one of the Weyl points.

To confirm the topological properties the authors had to look for signatures of the type-II Weyl dispersion in the 2D field profiles: type-II Weyl points significantly modifies the diffraction pattern of light, rendering it conical in shape. Even more exciting is that, in addition to this bulk signature, the Weyl dispersion is expected to give rise to the emergence of optical surface states — photonic analogues of topological excitations forming the arc-shaped dispersion connecting two Weyl points.

The observation of Weyl points and the associated surface states at optical frequencies is an important advance for two reasons. First, it shows that these exotic systems can be emulated in the optical domain, which offers the opportunity to probe other complex physical systems in photonic crystals and metamaterials. Second, it brings the concept of topological photonics one step closer to practical applications in optics.

The properties unique to this class of system can now be exploited to the full extent, controlling light not only classically, but also in quantum regimes. The synthetic gauge fields produced by Weyl charges open a new opportunity for engineering and controlling entangled states of photons, and may become indispensable for quantum computing.

Says Dr. Chen, "For engineer researchers, it is absolutely intriguing that manufacturing technology developed in an engineering laboratory can advance our fundamental understanding of Quantum mechanics. It has been a wonderful learning experience. But our research also has inversion symmetry. Next step, we will explore how cutting-edge quantum mechanics research can benefit manufacturing technology leading to better products and services."

Image above: Theoretical and numerical demonstration of topological phase transition associated with type-II Weyl points.a, Microscope image of the output facet of structure, representing a two-dimensional cut of the waveguide array for fixed z. b, Numerically determined phase diagram of the structure, as a function of lattice constant a and wavelength λ. Type-II Weyl points reside along the red curves, and Fermi arc-like surface states exist between these two curves (yellow region). c, Bulk band structure for the two relevant bands plotted as a function of kz (in the kx = ky = 0–plane, using the extended-zone scheme). Type-II Weyl points arise at their intersection. d–f, Isofrequency surfaces for the topologically trivial case (no Fermi arc-like states), at the Weyl point (WP), and the topological (with Fermi arc-like states) case, at a = 29,27 and 25 μm, at wavelengths 1,450 nm, 1,525 nm and 1,600 nm, respectively. The open circles in the phase diagram shown in b correspond to the band structures in d–f. All results in b–f are calculated numerically 28, using experimental parameters. (License #4120910778162)