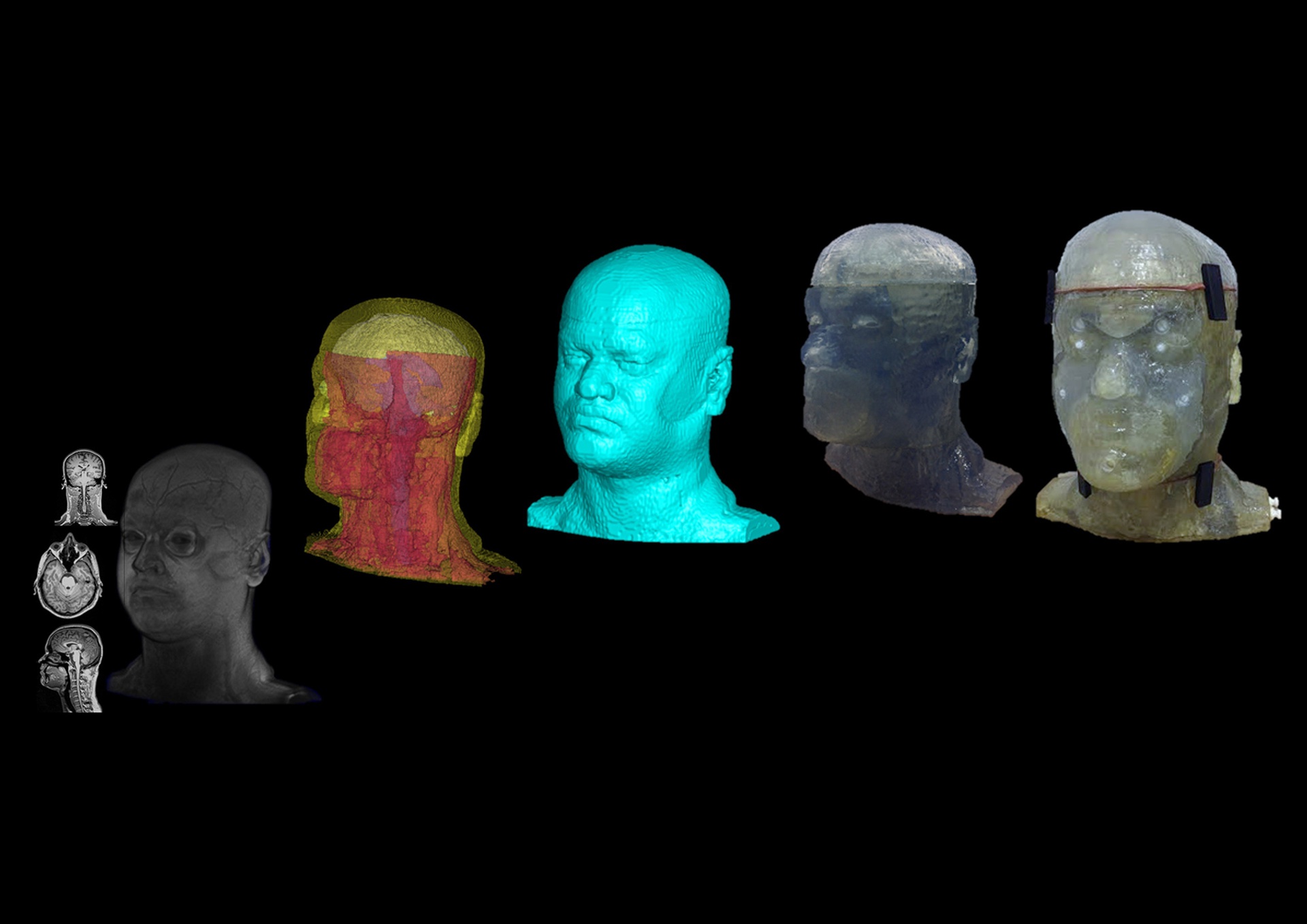 Depiction of the phantom head development. From a 3T MRI dataset and a 3D digital segmented image to a 3D-printed prototype. Photo credit: RF Research Facility.

PITTSBURGH (September 26, 2018) … Phantoms are not just ghostly figures of our imagination, they are also numerical or physical models that represent human characteristics and provide an inexpensive way to test electromagnetic applications. Sossena Wood, a bioengineering PhD candidate at the University of Pittsburgh, has developed a realistic phantom head for magnetic resonance research in the Swanson School of Engineering.

Wood started her tenure at Pitt as an undergraduate student in the Department of Electrical and Computer Engineering where she met Tamer Ibrahim, an associate professor of bioengineering. She began research in his lab, the Radiofrequency (RF) Research Facility, during her senior year and is now finishing her dissertation incorporating similar research as a graduate student in the Department of Bioengineering.

Ibrahim envisioned designing a 3D printed phantom head to use with the uniquely designed ultrahigh field technology in his lab. “In the RF Research Facility, we use a whole-body 7 Tesla magnetic resonance imager (7T MRI), which is one of the strongest clinical human MRI devices in the world,” said Ibrahim. 7T ultrahigh field technology is a powerful tool, but unfortunately, there are a few setbacks that come with this type of imaging.

“As you move from lower to higher fields, the images produced become less uniform and localized heating becomes more prevalent,” explained Ibrahim. “We wanted to develop an anthropomorphic phantom head to help us better understand these issues by providing a safer way to test the imaging. We use the device to analyze, evaluate, and calibrate the MRI systems and instrumentation before testing new protocols on human subjects.”

Researchers are currently using numerical simulations to study the effect of electromagnetic (EM) fields on biological tissues at varying frequencies. Wood said, “EM numerical modeling has been a standard when analyzing these interactions, and we wanted to create a phantom that resembled the human form for use in validating the EM modeling, thereby providing a more realistic environment for testing.”

Before Wood could print the 3D structure, she had to do computational work to build the digital blueprint for the model. She started with a 3T MRI dataset of a healthy male, which she characterized by segmentation and broke into eight tissue compartments, a feature that differentiates her model from other basic phantom heads. According to Wood, these compartments help improve image accuracy by acting as a sort of “speed bump” for the field.

After the computational preparations, Wood used an MRI scanner to produce a 3D-digital image of healthy male’s head and ran her model through computer-aided design, which is software used to create, modify, analyze, and optimize a design.

The next step was to print the prototype, which took three semesters to complete. “We used a plastic developed by DSM Somos® for our printing material because it allowed us to create durable and detailed parts with a similar conductivity to the human body,” said Wood. “To help the model further mimic a real environment, we created filling ports on the prototype where we can deposit fluids that resemble various tissue types.”

Now that Wood has a fully printed anthropomorphic phantom head, she is able to assemble it and begin testing. The phantom has many applications including testing to see if certain implants are able to go inside of an MRI or detecting the temperature rise in different tissues based on various RF instrumentation.

“With MR imaging, the power from the RF exposure is transformed into heat in the patient’s tissue, which can have detrimental effects on the patient’s health, especially with implants if not monitored by the scanner” explained Wood. “With our phantom head, we can test the safety of our imaging by putting probes inside of certain regions of the head and measuring the effects,” said Ibrahim.

Ibrahim and Wood hope that this model will eventually be developed commercially and provide others with the ability to pursue research without relying on human testing.