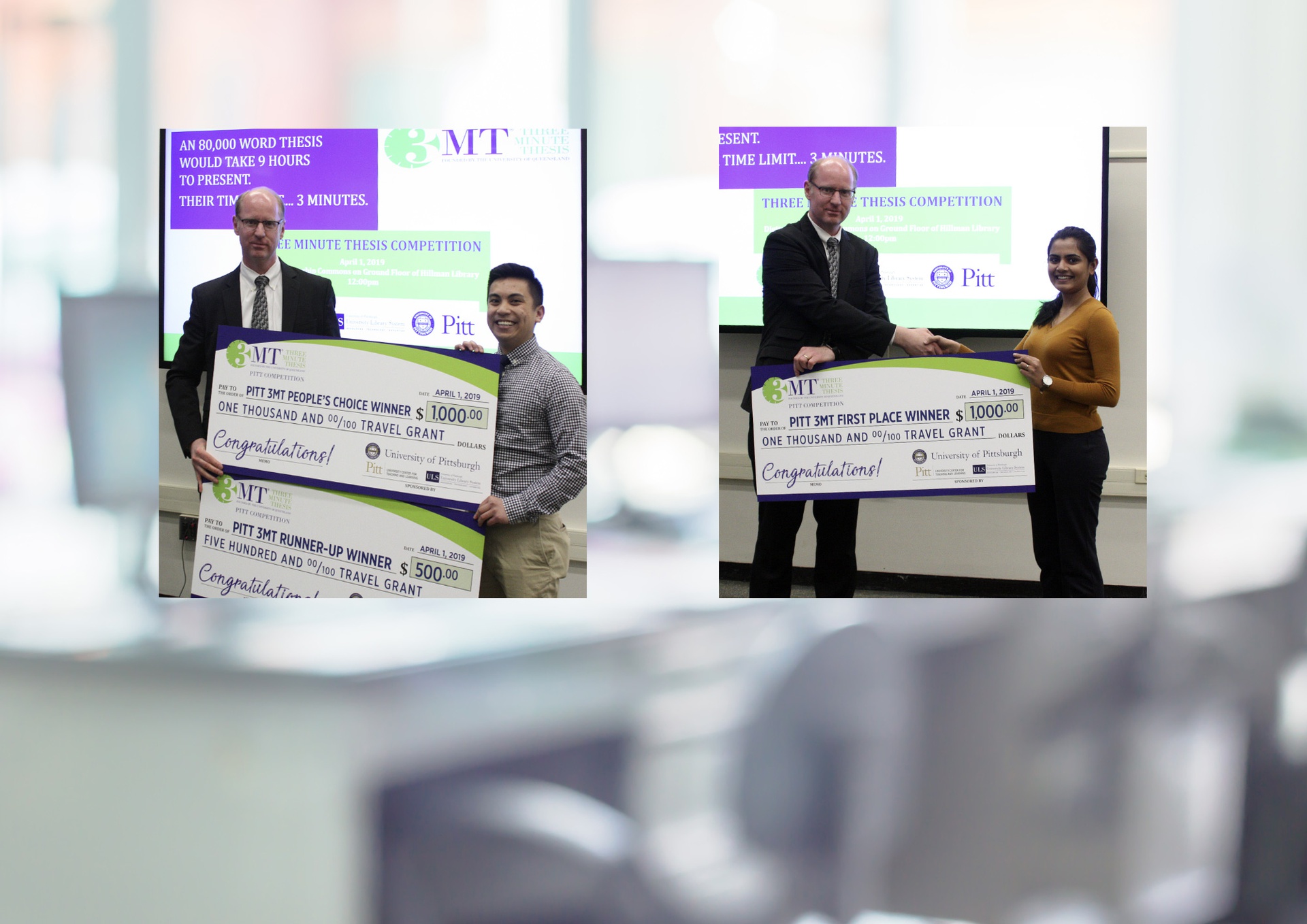 PITTSBURGH (April 16, 2019) … After their success in the Swanson School of Engineering’s Three Minute Thesis (3MT) competition, bioengineering graduate students Piyusha Gade and Gerald Ferrer participated in the university-wide event hosted by the University of Pittsburgh Office of the Provost on April 1, 2019. Gade was awarded first place while Ferrer captured the runner-up prize and the People’s Choice award.

The Pitt 3MT competition was held during National Graduate and Professional Student Appreciation Week, a celebration to emphasize the contributions, impact, and value of graduate and professional students on campuses throughout the United States. The Provost’s Office presented four prizes for the 3MT competition: first place was awarded a $1000 travel grant, two runner-ups were each awarded a $500 travel grant, and for the first time at Pitt, a $1000 travel grant was awarded to a People’s Choice winner.

“I am proud that both Piyusha and Gerald received awards at the university-wide Three Minute Thesis competition,” said Mary Besterfield-Sacre, Nickolas A. Dececco Professor of Industrial Engineering and Associate Dean for Academic Affairs. “We try to prepare our Swanson School students for successful careers in STEM, and effective communication is an important but often overlooked part of that.”

Gade, who placed first in both the Pitt and Swanson School 3MT competition, is a bioengineering a graduate student in the lab of Dr. Anne Robertson, Professor of Mechanical Engineering and Materials Science. She presented her research which involves rationally designing in situ engineered vascular grafts in young and aged hosts.

“Piyusha is an outstanding researcher – extremely smart, innovative and versatile,” Robertson said. “She is always ready to take on new challenges, both intellectually and professionally. I am so proud of Piyusha and her accomplishment!”

Ferrer, who was a runner-up in the Swanson School competition, presented his work from the Orthopaedic Robotics Lab of Dr. Richard Debski, professor of bioengineering. His current research is focused on quantifying location specific mechanical properties in tendons using different ultrasound techniques and understanding key biomechanical factors that influence rotator cuff tear propagation through computational models.

"I enjoyed the challenge of communicating the significance and impact of our research in a way that everyone - regardless of their background - could understand and relate to, all in under 3 minutes,” Ferrer said. “Being able to communicate with a diverse audience is important because it allows us to bridge the gap between scientists and nonscientists thus increasing awareness of the societal impact of your research.”

The 3MT Competition, developed by The University of Queensland, is designed to encourage students to communicate the importance of their research to the broader community. Since its launch in 2008, the 3MT competition has expanded to 67 countries, and events are currently held at more than 600 universities worldwide.