PITTSBURGH (October 22, 2018) … Ellen Martin, a senior bioengineering student at the University of Pittsburgh, received an award for her research presented at the Human Factors and Ergonomics Society Annual Meeting on October 3 in Philadelphia, PA. The conference paper, “Characterizing the Required Friction during Ladder Climbing”, details her work on improving ladder safety and was selected as the best student paper by the Safety Technical Group at the meeting.

Martin works with Kurt Beschorner, associate professor of bioengineering, in the Swanson School of Engineering’s Human Movement and Balance Laboratory where part of their research aims to create safer occupational environments by investigating the mechanics behind slips, trips, and falls. 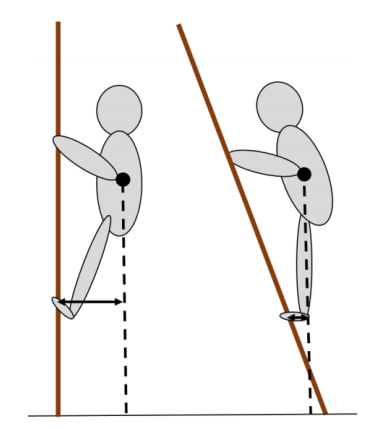 According to the US Department of Labor’s Occupational Safety and Health Administration1, falls from ladders are one of the leading causes of occupational fatalities and injuries.

“To help improve ladder safety, we investigated the risk of slipping by finding the amount of friction that a person requires to safely climb a ladder, known as the Required Coefficient of Friction (RCOF),” said Martin. “Ladders can be set up at different angles ranging from vertical to slanted so our group adjusted and measured the RCOF at various positions to determine which orientation was the safest for climbing.”

RCOF is calculated as the friction force over normal force during climbing. Martin and the group measured these values by embedding force sensors into the ladder and using motion capture to find the orientation of the shoe. The orientation determined which part of the overall force was the friction force, where the shoe is parallel with the surface, and which part was the normal force, where the shoe is perpendicular with the surface.

“A high RCOF value indicates that the subject requires a greater amount of friction force to stay stable, making the user more susceptible to slipping,” said Martin. “Based on our research, we determined that the RCOF was highest in the vertical configuration. This suggests that safety could be improved by making sure that a ladder is placed at an angle that keeps a person’s body over the ladder instead of hanging off of the ladder.”

Beschorner has applied similar coefficient of friction assessment methods to his other work with gait and encouraged Martin to adapt it to climbing. He added, “Ms. Martin’s work is an important step for developing a mechanism-based model of slipping risk for ladder climbing. Such a model will enable us to develop new methods for assessing ladder rung traction, which is needed to select and design safer ladders.”

1 “According to the US Department of Labor’s...” https://www.osha.gov/Publications/portable_ladder_qc.html