Pictured below, l to r: Drs. Abramowitch and Federspiel 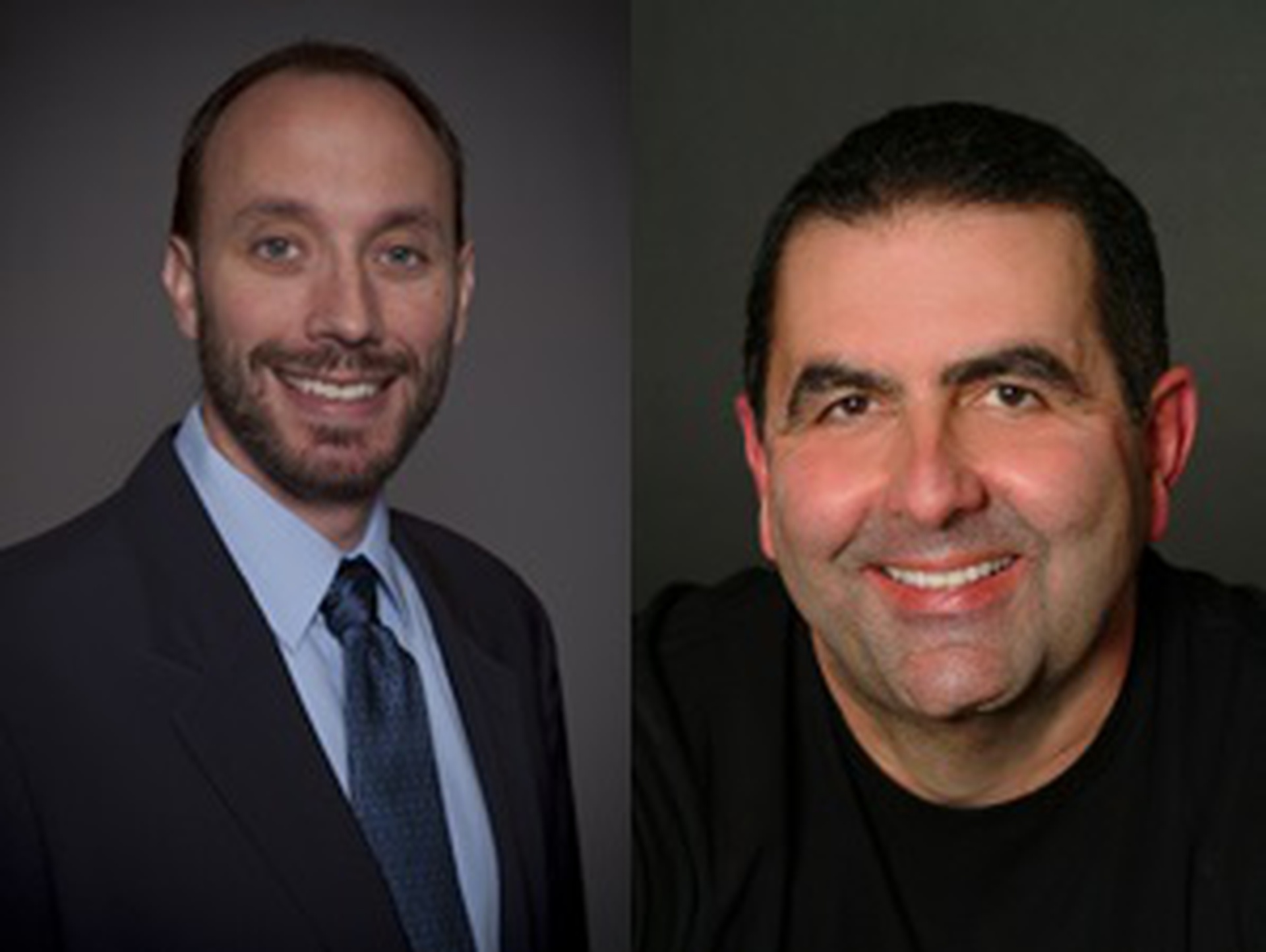 The program honors awardees from more than 20 categories, including Corporate Innovation, Emerging Female Scientist, Entrepreneur, Leadership in STEM Education, and others. These individuals and companies have distinguished themselves by making unparalleled contributions to science and technology in various disciplines.

Dr. Abramowitch is Assistant Professor of Bioengineering, Musculoskeletal Research Center, and Assistant Professor of Obstetrics, Gynecology, and Reproductive Sciences. His research is aimed at elucidating the processes of injury, disease, and healing of connective tissues through an understanding of tissue mechanics and the complex relationships between composition, structure, and function. He is particularly interested in utilizing this information to establish new clinical treatment strategies and rehabilitation protocols to improve patient care in the fields of Orthopaedics and Urogynecology.

Dr. Abramowitch directs the Tissue Mechanics Laboratory in the Musculoskeletal Research Center where much of his work has been in the area of functional tissue engineering. More specifically, he is interested in using bioscaffolds to enhance the healing of ligaments and tissues of the pelvic floor. In addition, Dr. Abramowitch has made significant advances in the use of viscoelastic theories to describe tissue mechanical behavior and evaluate the effectiveness of tissue engineering strategies.

Currently, Dr. Abramowitch is a Building Interdisciplinary Research Careers in Women's Health (BIRCWH) Fellow. Through this fellowship he hopes to contribute to clinically relevant advances in our current understanding of disorders of the pelvic floor in females through a multidisciplinary framework that integrates his background in experimental and computational biomechanics with basic biological and clinical research. His current focus is to incorporate a biological, biochemical, and clinical perspective into his work in order to develop sophisticated, predictive, computational models, which encompass multiple biological scales to describe the development and progression of pelvic organ prolapse (POP).

Dr. Federspiel is, William K. Whiteford Professor of Bioengineering and Professor of Chemical Engineering and Critical Care Medicine. He directs research in the Medical Devices Laboratory , a core laboratory of the McGowan Institute for Regenerative Medicine at the University of Pittsburgh. His laboratory does applied, translational research on medical devices for critical care medicine, including novel artificial lung devices for respiratory assist, as well as blood treatment devices for sepsis and other inflammatory disorders. The Medical Devices Laboratory has received continuous funding from NIH's National Heart, Lung and Blood Institute to support its research mission, including a recent award in 2013 of 3.5 million to develop a wearable artificial lung. Dr. Federspiel has over 90 research publications and book chapters and holds numerous patents related to respiratory assist devices.

He is an elected Fellow of the American Institute of Medical and Biological Engineering (AIMBE) and the Biomedical Engineering Society (BMES) , and recently served as a regular member of the Bioengineering Technology and Surgical Sciences (BTSS) Study Section at NIH. He is a Co-Founder of Alung Technologies Inc. , a Pittsburgh-based medical device company that is commercializing the Hemolung Respiratory Assist System (RAS) developed in his laboratory at Pitt. The Hemolung RAS was approved for human use in 2013 in Europe, Australia, and Canada, and has been used in over 40 patients with acute lung failure as an alternative to invasive mechanical ventilation. The company currently employs over 40 people including 8 bioengineers from Pitt's undergraduate and graduate program. Dr. Federspiel recently co-founded another company, Altercyte Inc., to develop and commercialize a medical device for acute inflammatory disorders.


In addition to the annual slate of recipients, this year the Science Center is conferring its highest commendation, the Chairman's Award, on Jared L. Cohon, former president of Carnegie Mellon University, and Mark A. Nordenberg, chancellor of the University of Pittsburgh.

"These two individuals have had an unparalleled impact on our region's scientific vitality," said Ann Metzger, the Henry Buhl Jr. Co-director of Carnegie Science Center. "As concurrent leaders of two great local universities, President Cohon and Chancellor Nordenberg forged an unprecedented relationship of mutual respect and collaboration, which has helped open the door to a new era of scientific exploration, entrepreneurial strength, and academic excellence in Pittsburgh."

"The Carnegie Science Awards spotlight some of the most innovative minds today," said Ron Baillie, the Henry Buhl Jr. Co-director of Carnegie Science Center. "These individuals are making a global impact starting with our own region. We know they are already inspiring a new generation of leaders. One of our central missions is to promote education in science, technology, engineering, and math - or STEM. The Carnegie Science Awards winners exemplify the highest levels of success in STEM fields and in STEM education. We are proud to recognize these outstanding awardees and look forward to their continued contributions."

"Eaton has supported the Carnegie Science Awards through a premier sponsorship for the past 11 years and has seen remarkable leaders and organizations recognized for their contributions to science, technology, engineering, and math," said Mark Horner, senior manager, Global Communications, Electrical Sector, Eaton. "We congratulate Carnegie Science Center, and all of the winners and nominees, for their commitment to discovery, innovation, and education."

Awardees will be honored during a formal celebration at Carnegie Music Hall on Friday, May 9, 2014. Three student winners, who will be selected at the Science Center's 75th annual Pittsburgh Regional Science and Engineering Fair, also will be recognized.