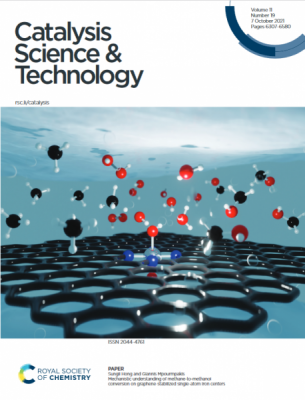 Methane is a greenhouse gas emitted during the production and transport of natural gas, as well as from agricultural processes, and the decay of organic waste. It has a negative image due to its contribution to climate change, but methane is also a valuable building block for industrial chemicals.

Storing and utilizing methane has the potential to reduce its environmental impact while benefiting industry, but transportation from remote facilities — such as fracking sites — to chemical plants is challenging. Compared to compressed natural gas, liquid methanol is easier to store and transport, but the current method for this gas-to-liquid conversion is energy demanding and inefficient.

Researchers seek to find direct methane-to-methanol conversion mechanisms to make the process more cost-effective, and the University of Pittsburgh’s Giannis Mpourmpakis studied the use of a graphene-stabilized single-atom iron catalyst to complete this complex task. The results are featured on the cover of the latest issue of Catalysis Science and Technology.

“This new catalyst had been experimentally shown to convert methane to liquid products even at ambient temperature, but the exact mechanisms for this gas-to-liquid chemical conversion were not well understood. The computational research of our graduate student Sungil Hong revealed information that cannot be probed by experiments and can aid the discovery of other efficient methane-to-methanol catalysts” said Mpourmpakis, Bicentennial Alumni Faculty Fellow and associate professor of chemical and petroleum engineering at Pitt’s Swanson School of Engineering.

Hong, the lead author of the study, is a member of Mpourmpakis’ Computer-Aided Nano and Energy Lab (CANELa). The work is supported by the National Science Foundation (award no. 1920623) and Pitt’s Center for Research Computing.