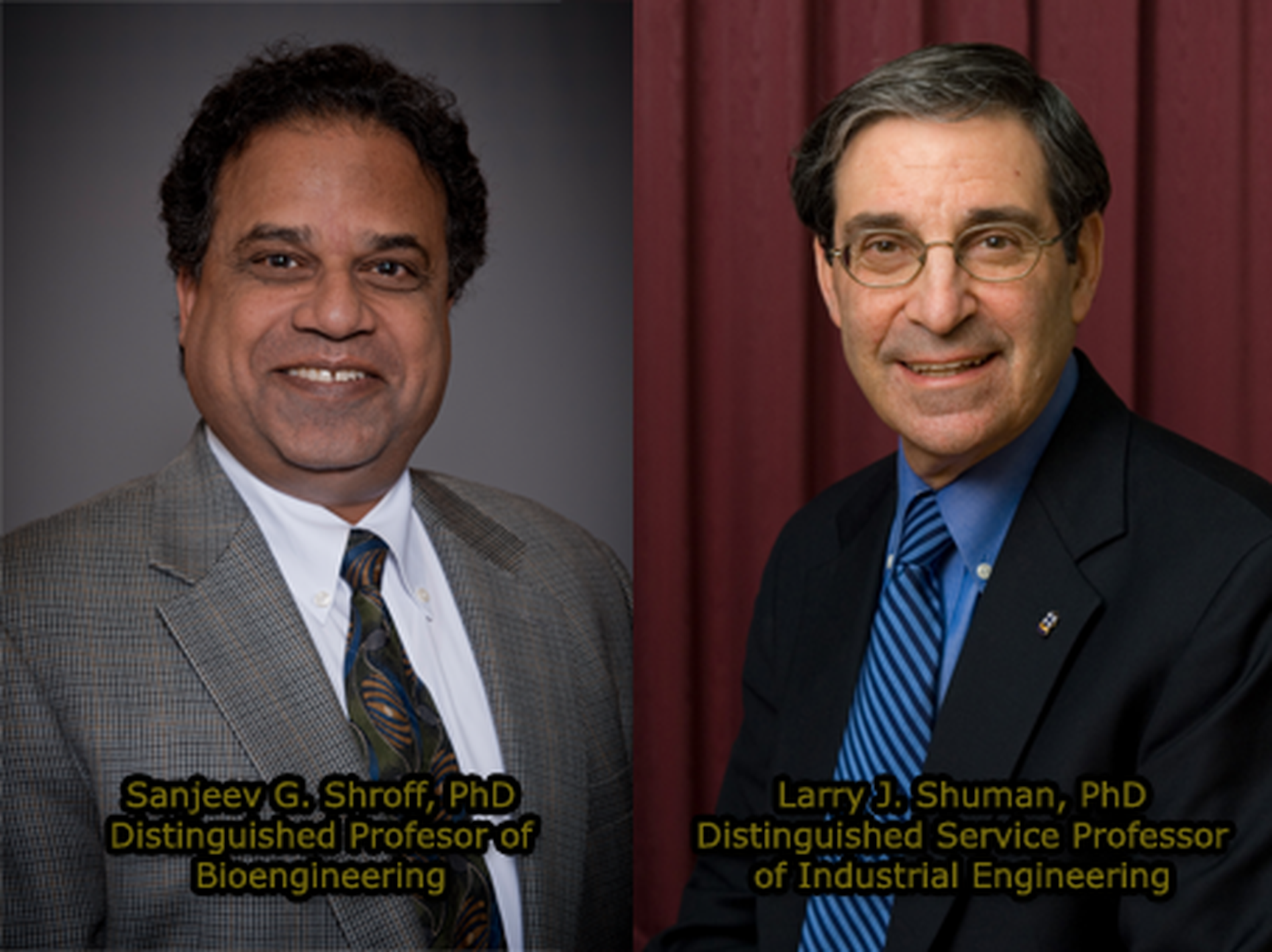 Shroff_Shuman-337713.png
PITTSBURGH  (August 13, 2012) ... As the 2012/2013 academic year is about to begin, the Swanson School of Engineering recognizes two newly-honored faculty. This summer University of Pittsburgh Chancellor Mark A. Nordenberg elevated six faculty to Distinguished status, two of whom were from the Swanson School. Sanjeev G. Shroff, PhD, Associate Chair of the Department of Bioengineering, was named Distinguished Professor of Bioengineering; and Larry J. Shuman, PhD, Professor of Industrial Engineering and Senior Associate Dean for Academic Affairs, was named Distinguished Service Professor of Industrial Engineering.

The rank of Distinguished Professor recognizes extraordinary, internationally recognized scholarly attainment in an individual discipline or field. The title of Distinguished Service Professor recognizes distinctive contributions and outstanding service (e.g., professional, regional, national, international) to the University community in support of its multifaceted teaching/research/service mission, as well as performance excellence in the faculty member's department or school and national stature in his or her discipline or field.

Chancellor Nordenberg made the appointments based on the recommendations of Pitt Provost and Senior Vice Chancellor Patricia E. Beeson. The appointments of Drs. Shroff and Shuman will be effective Sept. 1.

Sanjeev G. Shroff is professor and Gerald E. McGinnis Endowed Chair in Bioengineering in the Swanson School of Engineering; professor of medicine in the School of Medicine; and professor of clinical and translational Science in the University of Pittsburgh Clinical and Translational Science Institute. Additionally, he is a core faculty member in the Pitt-UPMC McGowan Institute of Regenerative Medicine and an affiliated faculty member at the Magee-Womens Research Institute. Shroff has served as associate chair of the Department of Bioengineering since 2008.

Dr. Shroff received his PhD in bioengineering from the University of Pennsylvania in 1981 and the next year completed a postdoctoral fellowship at Penn within the Cardiovascular-Pulmonary Division of the Department of Medicine. Prior to joining the Pitt faculty in 2000, he was for 18 years a faculty member in the Cardiology Section of the University of Chicago's Department of Medicine.

Dr. Shroff's research interests involve studies of the cardiovascular system-including the evaluation of contractile and regulatory proteins and overall whole heart function; vascular stiffness and cardiovascular function; and large-scale mathematical simulations of biological systems for research, education, and engineering design. He has published more than 120 peer-reviewed journal articles and has received significant research funding from the National Institutes of Health (NIH), American Heart Association, and National Science Foundation. He also is an elected fellow of the American Physiological Society, the American Institute for Medical and Biological Engineering, and the Biomedical Engineering Society.

Dr. Shroff is the recipient of the 2007 Carnegie Science Center Award for Excellence (University/Post-Secondary Educator). He also received the Chancellor's Distinguished Teaching Award in 2011 for his passion for teaching students both in the classroom and in the laboratory. In particular, he was praised for his pioneering contributions to innovative, simulation-based teaching tools that are having a national impact on the training of bioengineers, health care providers, and medical students. Shroff is the principal investigator of a National Institutes of Health T32 training grant titled "Training Program in Cardiovascular Bioengineering," which was initiated in 2005 and is currently in its second five-year cycle of funding.

Larry Shuman is professor of industrial engineering and senior associate dean for academic affairs in the Swanson School of Engineering. Dr. Shuman is recognized for his work in improving the engineering educational experience and his studies of the ethical behavior of engineers and engineering managers. Previously, he had studied the application of operations research to health delivery systems and had been involved with the design and simulation of prehospital care systems, the evaluation of care delivery processes, and the design of particular hospital subsystems, including simulation studies of diagnostic imaging, emergency departments, operating rooms, nurse scheduling, and staffing.

In his administrative role, he is primarily responsible for supervising the Swanson School's cooperative engineering education program and developing the school's international education program. Approximately half of the school's undergraduate engineering students now participate in the co-op program, while last year 37 percent of the graduating seniors had an international experience.

Dr. Shuman, who previously served as interim dean of the Swanson School of Engineering, joined the department in 1969. He served as cochair of the 1997 Frontiers in Education Conference, held in Pittsburgh. He is the founding editor of Advances in Engineering Education; he also served as a senior associate editor of the Journal of Engineering Education, both published by the American Society of Engineering Education. Previously, he was co-editor of the Journal of the Society for Health Systems. He has directed National Science Foundation-funded studies focused on models and modeling (with six partner institutions), as well as studies focused on the ethical behavior of engineers. His assessment of engineering education outcomes (with five partner institutions) resulted in methodologies for assessing changes in student attitudes and predicting those students most likely to leave engineering; his assessment technique was adopted by a number of other engineering programs.

In total, Dr. Shuman has been principal or coprincipal investigator on more than 30 sponsored research projects funded by federal and state government agencies and private foundations. During his career at Pitt, he has collaborated closely with a number of colleagues, most notably Harvey Wolfe, professor emeritus of industrial engineering throughout most of his career, and more recently and currently with Mary Besterfield-Sacre, a professor of industrial engineering.

Dr. Shuman received his PhD in operations research from the Johns Hopkins University, and the Bachelor of Science in Electrical Engineering degree from the University of Cincinnati.