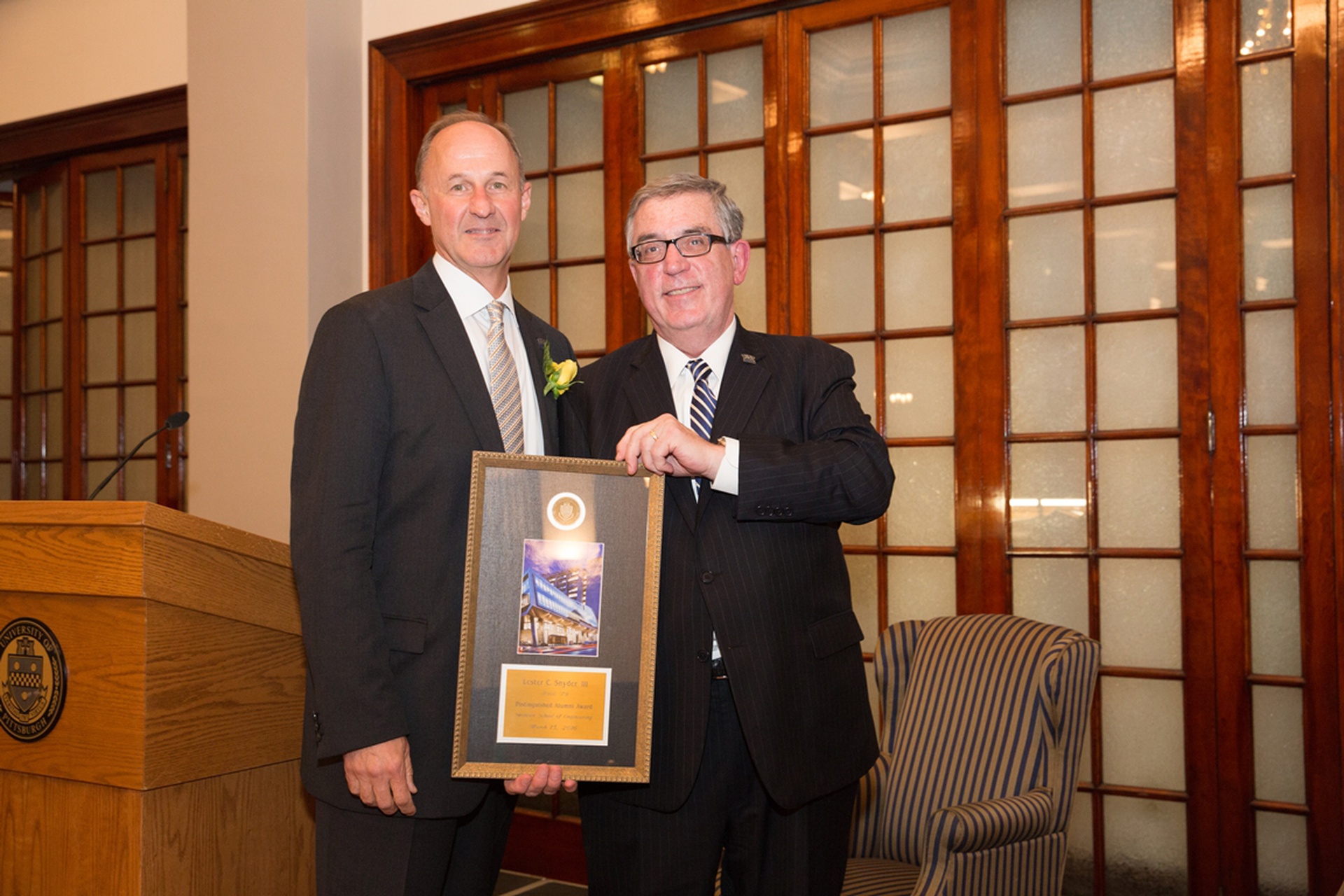 PITTSBURGH (March 16, 2016) … More than 300 faculty, staff, alumni and friends of the Swanson School of Engineering gathered last night to recognize this year's Distinguished Alumni Award recipients at the School's annual banquet in the University of Pittsburgh's Alumni Hall. Gerald D. Holder, US Steel Dean of Engineering, presented awards honoring alumni from each of the School's six departments, as well as for the Swanson School overall. This year's overall winner was Lester C. Snyder III, BSCE '79, President & CEO of i+icon USA

"The Swanson School Distinguished Alumni Award recognizes past recipients of the departmental awards who have excelled in their careers, who have been an inspiration to faculty and students at the Swanson School, and who through their accomplishments and capacity have had an impact on the next generation of Pitt engineers," Dean Holder said. "Les truly reflects these dimensions, and has shown himself to be an exemplary alumnus of the Swanson School and of Pitt."

About Lester Synder III
Upon graduating from the University of Pittsburgh in 1979 with a bachelor’s degree in civil engineering, Mr. Snyder’s career began an as estimator in pre-construction, launching him into project engineering where he would become a project manager. From 1995 to 2004, Mr. Snyder served as executive vice president for American Bridge Company, responsible for expanding the company’s operations along the eastern seaboard, beyond Florida and into the Caribbean. From 2004 to 2011, he was President and Chief Operating Officer for Barton Malow Company, a Michigan-based design and construction services company operating throughout the United States, Mexico, and Canada.

Currently, Mr. Snyder is the President and Chief Executive Officer for Infrastructure and Industrial Constructors USA, LLC, branded as i+icon USA, headquartered in Pittsburgh. This is parent company for a family of diversified heavy/civil and industrial construction companies recognized for innovative solutions.

Mr. Snyder is a third generation builder. His grandfather was a fixture in the region’s construction industry, followed by his father, who he says is his most influential mentor. In honor of his father achieving his civil engineering degree while completing multiple tours of duty during WWII and the Korean Conflict, Mr. Snyder has endowed the Lester C. Snyder Jr. Scholarship to assist Pitt’s Civil and Environmental Engineering students who have served in the military.

His involvement with Associated General Contractors of America (AGCA) has earned him a lifetime appointment to its Board of Governors, and he currently serves on the Board of Directors for AGCA and for its Education and Research Foundation.  He is a past Chair of the Building Division, the joint AIA-AGC Committee, the Private/Public Industry Advisory Council, and a Committee Chair of the Year awardee. He has led various other committees and forums throughout his affiliation.

Mr. Snyder is an active member of the Swanson School’s Board of Visitors and the Department of Civil and Environmental Engineering’s visiting committee. Les consistently participates in former Governor Jeb Bush’s Foundation for Excellence in Education, serves on the Facilities Committee of Central Catholic High School in Pittsburgh, and assisting with the development of their new STEM building. He also serves on committees for the Allegheny Conference.

Pictured above from left: Lester Snyder and Dean Holder