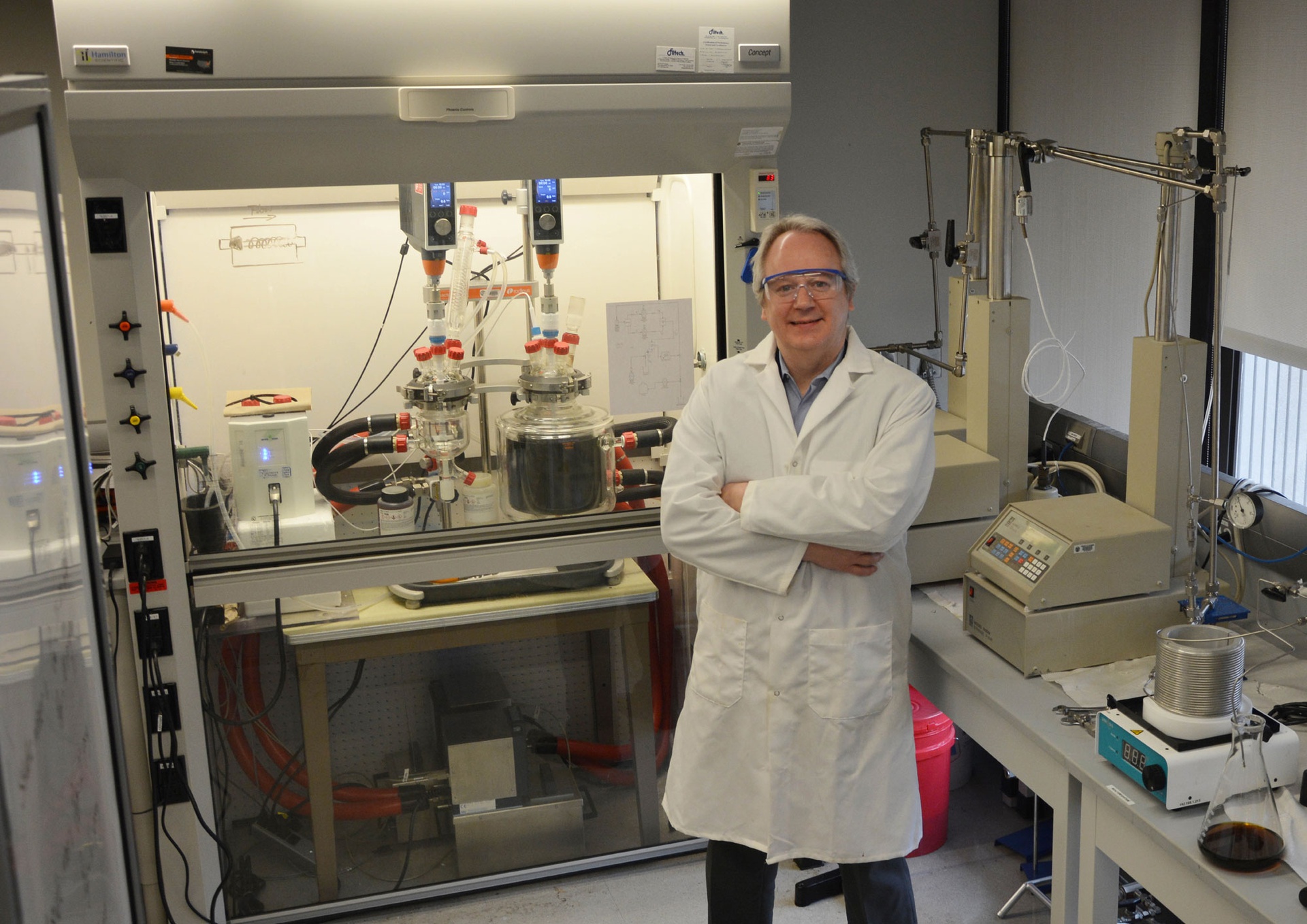 Dr. Veser in his lab at the Swanson School. To the left of Dr. Veser are batch reactors, and to the right are the two pumps and the coil-shaped tubular reactor necessary for continuous processing.

PITTSBURGH (March 8, 2018) … Economic hardship, population decline, and the rapid decay of the manufacturing industry afflicted much of the Midwest and Great Lakes region in the 1980s earning it the nickname America’s “Rust Belt.” Around the same time across the Atlantic, chemical manufacturers in the United Kingdom were developing new technologies to compete in the global economy.

“The trend began in the U.K. and quickly spread to other parts of Europe like the Netherlands and Germany, but the U.S. stagnated,” says Götz Veser, professor of chemical and petroleum engineering at Pitt’s Swanson School of Engineering. “The chemical industry is extremely risk averse to begin with, and American manufacturers continue to view unproven, new technologies as much too risky at an industrial scale.”

Despite other economic sectors like higher education and healthcare embracing new technology in the region, manufacturers often tighten their rusty belts rather than invest in innovation. The reluctance to change has dulled their competitive edge for decades; however, Dr. Veser’s two new research collaborations between academia and industry, backed by the U.S. Department of Energy (DOE) and totaling nearly $10 million, look to give American manufacturing a long overdue overhaul.

“The focus is on novel process technology, i.e. our goal is to create the same products but much more efficiently. The U.S. has seen many incremental updates to technology over the years but very little real innovation. Jointly with our industry partners, we are trying to show the chemical industry that it doesn’t have to lock itself into technology from the 1950s and that we can implement new techniques without disrupting the entire economy,” explains Dr. Veser.

“Batches are essentially big pots. You put in all the reactants, mix, heat, and pray. They can be as big as 50,000 gallon pots. Controlling this monster of ingredients is difficult. As a result, the efficiency is low, and you can lose a whole batch if something goes wrong,” says Dr. Veser.

The researchers will be transitioning Lubrizol’s production of succinimide—an oil additive that keeps fuel-burning byproducts from damaging engines. Dr. Veser hopes continuous processing will improve energy efficiency by more than 20 percent, not only in the lab but also in the manufacturing plant.

“Ideally, at the end of the grant period the result will be industrial implementation, not just the development of a new technology but immediate deployment. We will use Lubrizol’s pilot plant facilities for testing the technology, and they have committed to building a full-scale extension plant if the technology works as anticipated,” says Dr. Veser.

Continuous processing is one example of process intensification—a chemical engineering approach to rethinking manufacturing with an emphasis on sustainability. Dr. Veser will lead Pitt in another $4.6 million DOE grant. The project will apply similar process intensification approaches to finding an efficient way to convert methane to benzene. The technology could have even greater appeal in the region as the new Shell cracker plant comes online in Beaver County. The current cracker plant only uses ethane, a much smaller fraction of natural gas, leaving methane to be burnt.

“Methane, the main component in natural gas, can be converted into valuable chemical intermediates called aromatics,” says Dr. Veser. “This is a well-known process that has, however, not been commercialized because of very low efficiency of the conventional process routes. We believe the use of microwave radiation instead of conventional heating can result in drastic improvements to efficiency and may render the process economical.”

The principal investigator of the study is John Hu, Statler Chair in engineering in the Statler College of Engineering and Mineral Resources at West Virginia University. Dr. Hu and his team at WVU will work with researchers from the National Energy Technology Laboratory to test the efficacy of the microwave reactors while Dr. Veser and his team will design new catalysts and materials to enable the process. As part of the academic/industry partnership encouraged by RAPID, Shell will join the study to evaluate process economics and industrial viability.