Most Americans expect rooms to brighten with the flick of a switch and clean water to be available at the turn of a faucet, almost without a thought.

However, many communities worldwide view these as more than simple amenities; to them, they are nearly impossible to obtain.

That’s where innovative engineering comes into play — with the help of University of Pittsburgh students. The Pitt Humanities, Engineering and Design Club — or Pitt HEAD Club for short — is planning a June return to their work with the Emberá, an indigenous community in Panama’s Chagres National Park, where such amenities are scarce to nonexistent.

In October 2017, the team installed about 30 solar panels for the community of 80 people, which will power a freezer to store the community’s freshly caught fish. In addition, new shower heads were installed in some homes to increase water pressure, and a pedestrian bridge was built for easier travel for the monthly journey by community members to the village’s water storage facility.

“The project was a true engineering challenge and provided a great learning opportunity for all the students,” said Daniel Budny, associate professor of environmental engineering and the club’s academic adviser.

Budny accompanied the six-student team in October to help with building the amenities, something he has been doing since the club’s inception in 2012.

“Without him (Budny), nothing would have gotten done,” said team member and senior civil engineering student Nicholas McGinley. “He really pushed us to be successful and was blunt. He said we would have to get down there and we would have to improvise upon what we planned.”

The club has been visiting Panama and other locations each semester for the past five years, helping to improve people's lives of people living by designing and installing such amenities as water storage tanks, water lines, community centers and garbage storage facilities, among others. 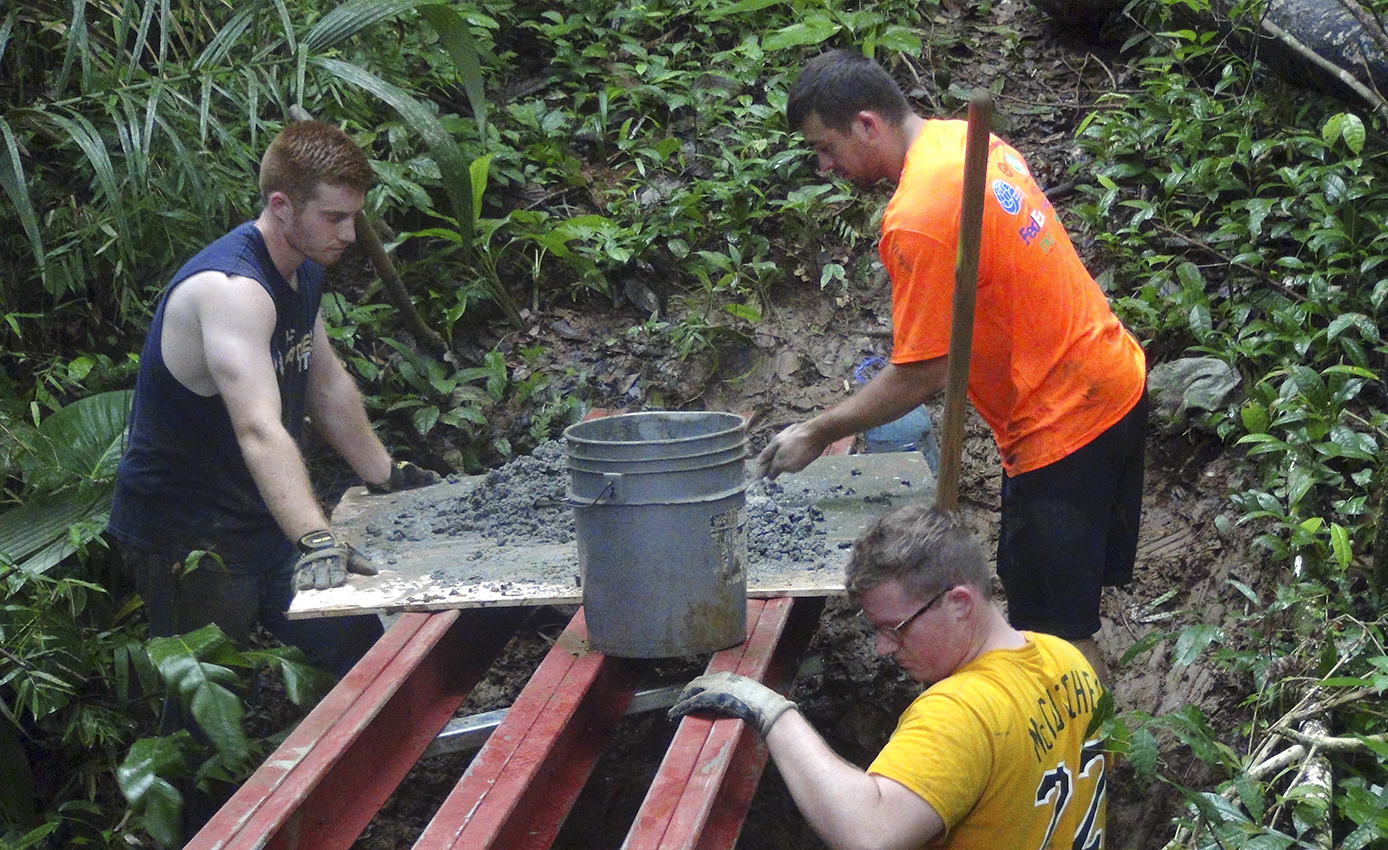 Pitt HEAD Club members (from left to right) Nicholas McGinley, Stephen Anderjack and Robert Kountz work to construct a pedestrian bridge for the Emberá community members to more easily reach their water storage facility. The Team had to work in difficult terrain in the jungles of Chagres National Park, along with sweltering heat and limited technology.

The recent mission to the Emberá was the team’s most arduous. The students had to navigate the Chagres River by canoe about 20 minutes round trip each day to reach the community. Along with that, the team didn't have cell phone or wifi access and worked in temperatures in the high 80s and low 90s with high humidity.

While language barrier issues were also present, a translator was brought with the team to help communicate with the Emberá villagers.

“I had never been in a rainforest before this, but you’re just sliding around on mud and you have a 50-pound bag of sand or a 25-foot beam on your shoulder,” said Robbie Kountz, a team member and senior civil and environmental engineering student. “Nothing really too dangerous though. And the people were amazing and happy to see all this coming together.”

Along with that, two of the team’s larger solar panels were damaged during shipping. They had to be replaced as a result, but that did not deter the team from completing its mission. Within a few hours of the chest freezer installation, Emberá community members began storing that day’s fresh catch of corvina, a highly prized fish. 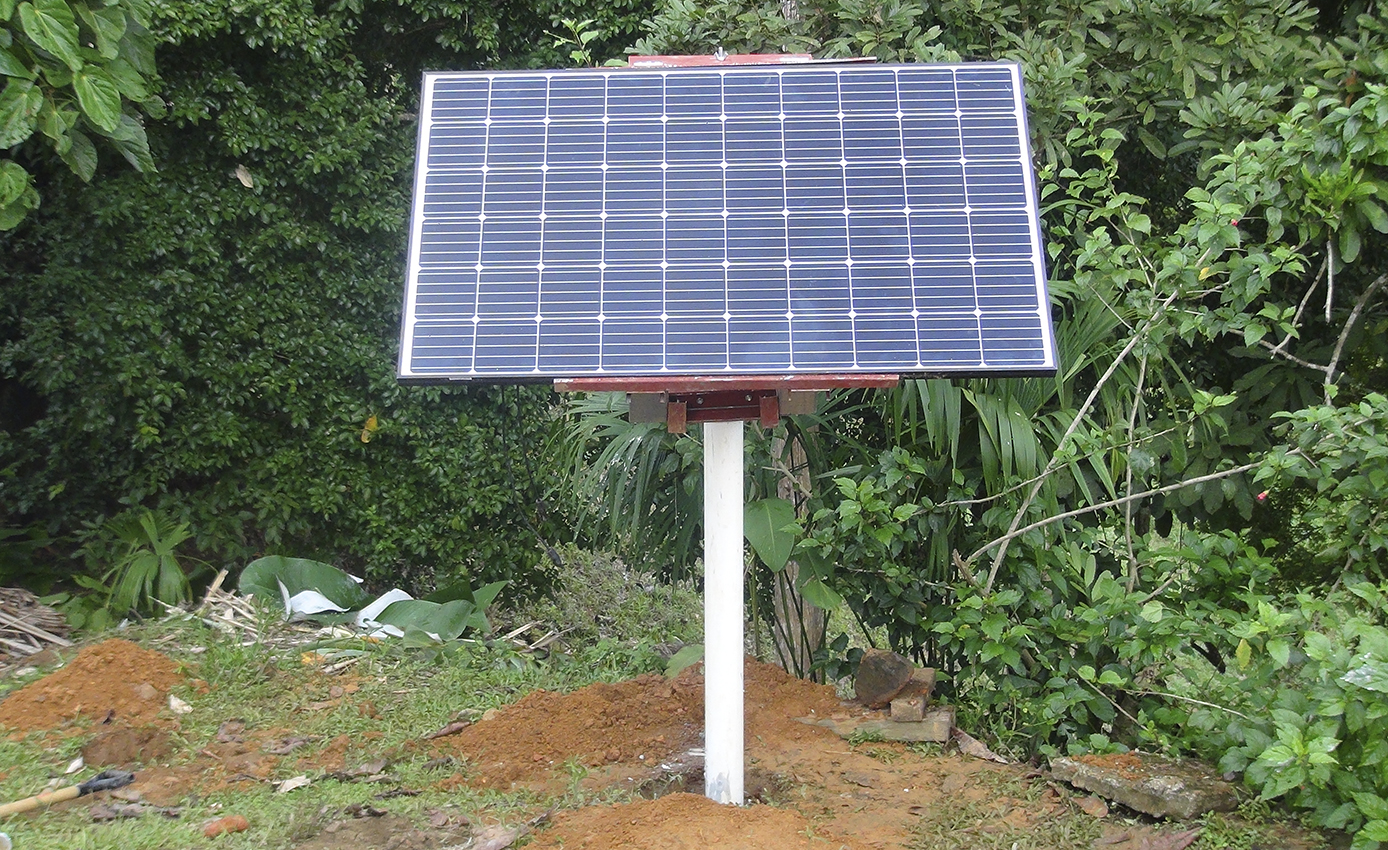 About 30 solar panels were installed for the Emberá community during the Pitt HEAD Club's mission in October 2017. The panels collected energy from the sun to power the community's technology, including a freezer that stores freshly caught fish.

“It’s really on-the-fly thinking at all times,” said Kountz. “You just can’t stop in your tracks. You have to keep improvising your plans.”

While the Pitt HEAD Club funds its own missions and receives some support from local supply companies, it received help this year through a donation from John Swanson, the Swanson School’s namesake.

“It was definitely great to know that the guy who this school is named after is a big supporter of what we do,” said McGinley. “It meant a lot.”

About 30 bags were packed with batteries and tools needed to complete the mission. The solar panels and the mounts used to place them were designed by mechanical engineering students who did not fly down with the team. 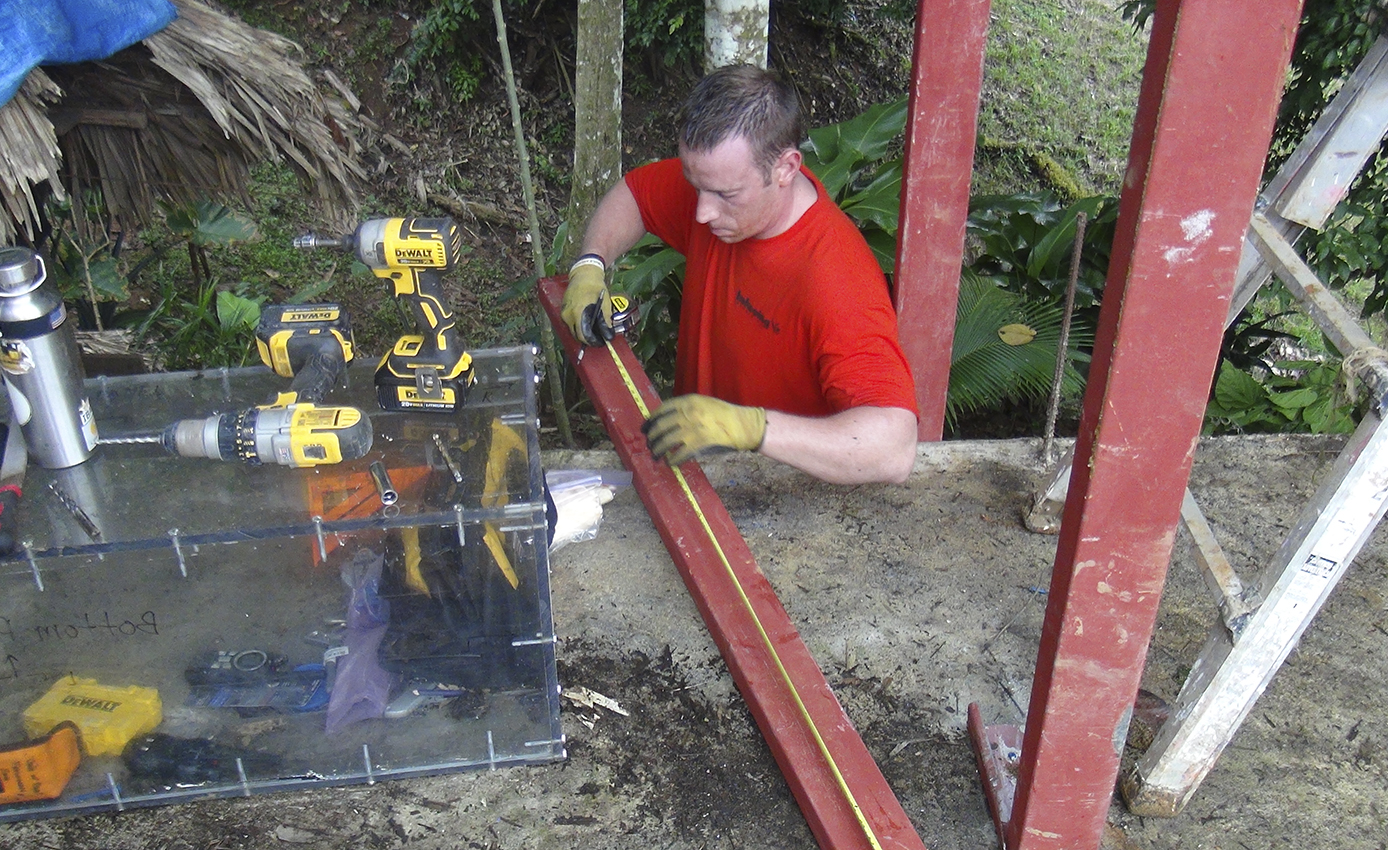 Pitt HEAD Club member Jon Abbey measures a support beam while working on a cover for the solar-powered freezer for fish storage.

For their return to the village in June, the team members are working on getting more funding for a filtration system to improve the water quality, based on samples taken during this mission.

Budny said while the mission serves to improve people’s lives in other parts of the world, it also serves to teach the students and others that engineering and other sciences can solve issues outside the lab.

“Our work in many cases solves a lot of issues,” he said. “It shows students the humanitarian and social impact that engineering has on society.”

The missions also give students a cultural experience. For some, this was their first time visiting Panama.

“It was interesting seeing the different ways people lived,” said team member and senior civil engineering student Stephen Anderjack, one such first-time visitor. “It was really hot and humid, but it was a lot of fun.”