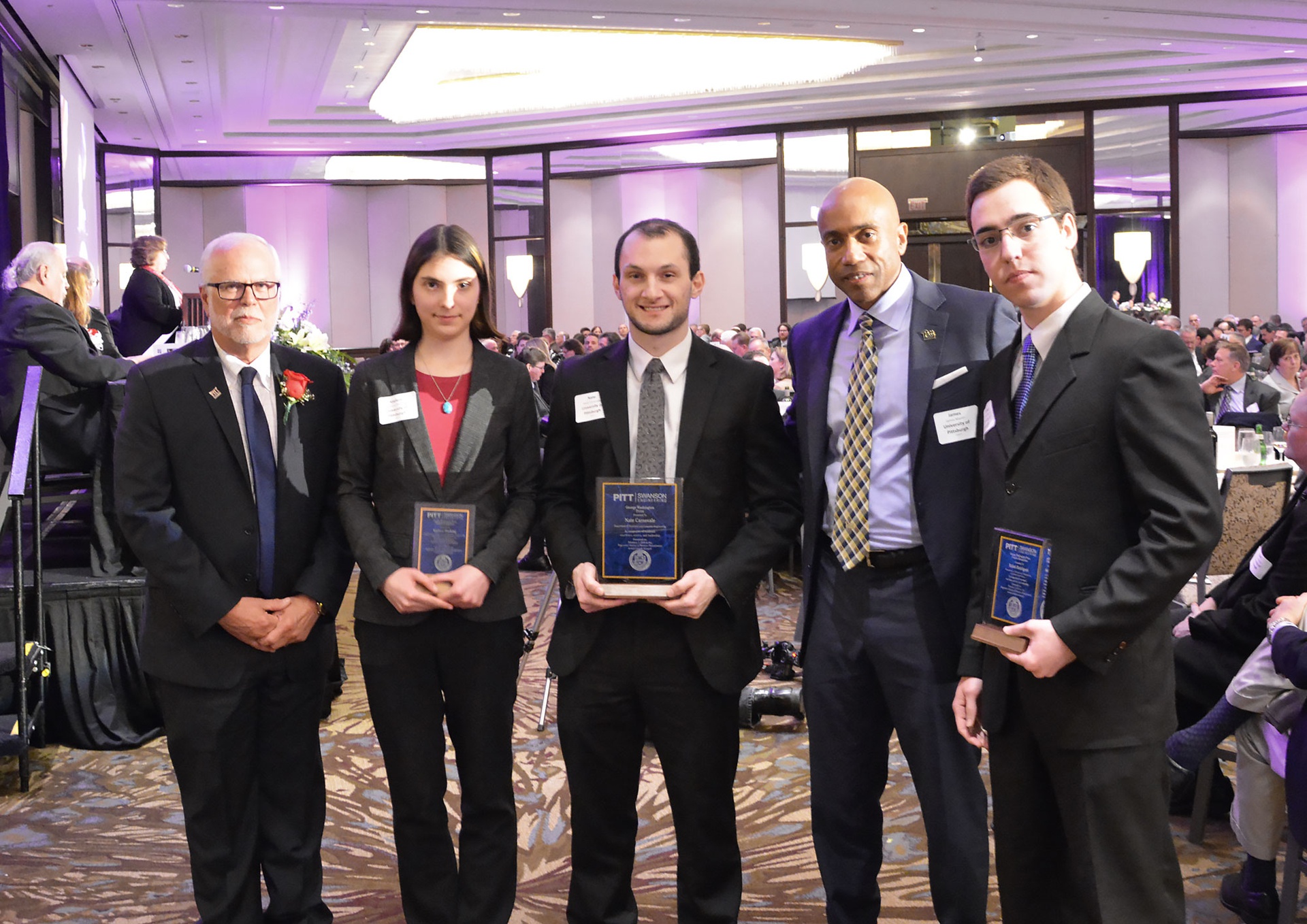 PITTSBURGH (February 8, 2019) … Students and faculty from the University of Pittsburgh’s Swanson School of Engineering were recognized last night at the 135th Annual Engineering Awards Banquet of the Engineers’ Society of Western Pennsylvania (ESWP), the longest-lived awards program in American history. Mark Magalotti, PhD, P.E., Professor of Practice in Civil and Environmental Engineering and Assistant Co-Director of the Center for Sustainable Transportation Infrastructure, received the Society’s William Metcalf Award. Nathan Carnovale, a senior in electrical and computer engineering, was awarded the Swanson School’s George Washington Prize.

“The Engineers’ Society has a long and storied history, and embodies the incredible legacy of engineering in Pittsburgh and western Pennsylvania with luminary members such as George Westinghouse, John Brashear and Andrew Carnegie,” noted James R. Martin II, U.S. Steel Dean of Engineering at Pitt. “Mark represents one of the outstanding sustainable transportation researchers in the U.S., and Nathan is beginning what will be an exceptional career in electrical engineering. Both represent the strong traditions of engineering, as well as the future of our profession.”

The William Metcalf Award, named in honor of ESWP’s first President, recognizes an outstanding engineer who is a resident of the United States and whose field of engineering accomplishment relates to those normally associated with western Pennsylvania, such as steel, aluminum, power, coal, electrical equipment, chemical, glass, construction, etc. Thirteen faculty or alumni of the University of Pittsburgh have received the Metcalf Award since its inception in 1963, representing more than a quarter of all awardees.

The George Washington Prize, founded in 2008, honors the first President of the United States and the country’s first engineer. Its mission is to reinforce the importance of engineering and technology in society, and enhance the visibility of the profession across the Swanson School’s engineering disciplines. The annual award recognizes Pitt seniors who display outstanding leadership, scholarship and performance as determined by a committee of eight professional engineers and Swanson School faculty. Winners receive a $2500 Dean’s Fellowship and award plaque. An additional $7,500 is awarded to the winner if he or she attends graduate school at the University of Pittsburgh.

About Mark Magalotti
Dr. Magalotti is a triple-alumnus of the University of Pittsburgh, having earned his bachelor’s, master’s, and PhD in Civil Engineering from the Swanson School. He is the assistant Co-Director of the University of Pittsburgh’s Center for Sustainable Transportation Infrastructure, which advances sustainable transportation research through collaborative, multi-disciplinary efforts, education, and dissemination of new technologies and knowledge. Dr. Magalotti has over 30 years’ experience in the management of transportation planning and traffic engineering projects, and was the founder and CEO of Trans Associates, a regional transportation consulting firm. He is a nationally recognized leader in transportation engineering and has been instrumental in assisting with the development of transportation planning policies. He served as the Chairman for the PennDOT Highway Access Occupancy Policy Changes (Chapter 441) and the Advisory Committee for the “Access Management Model Ordinances for Pennsylvania Municipalities Handbook.” In addition, Mr. Magalotti has assisted various municipalities throughout the Commonwealth of Pennsylvania with developing Impact Fee Ordinances and traffic calming policies.

About Nathan Carnovale
Nate Carnovale is scheduled to graduate from the University of Pittsburgh in December 2019 with a bachelor of science in electrical engineering and a concentration in electric power, and plans to pursue an M.S. degree in electric power engineering at Pitt starting in spring 2020. During his undergraduate career, he interned with Eaton for two summers, working at Eaton’s Power Systems Experience Center and in Eaton’s Power Systems Automation services group in Warrendale, Pa. There he gained experience in power systems metering and monitoring, as well as experience installing, wiring, and programming Eaton demos at the Experience Center. He will be working in Eaton’s Power Systems Controls group this summer working with microgrids. For four semesters at Pitt, Carnovale has been a teaching assistant for the Art of Making, an introductory engineering course to hands-on systems design. He is currently working to develop an adapted physical education learning tool for students with physical and mental challenges at the Western Pennsylvania School for Blind Children in Pittsburgh, a project he started during his time as a student in the Art of Making course. He is a two-time recipient of the Institute of Electrical and Electronics Engineers (IEEE)Power and Energy Society (PES)Scholarship Plus Award.

About ESWP
Founded in 1880, ESWP is a nonprofit association of more than 850 members and 30 affiliated technical societies engaged in a full spectrum of engineering and applied science disciplines. Now in its 134th year, the annual Engineering Awards Banquet is the oldest award event in the world - predating the Nobel Prize (1901), the American Institute of Architects Gold Medal (1907), and the Pulitzer Prize (1917).