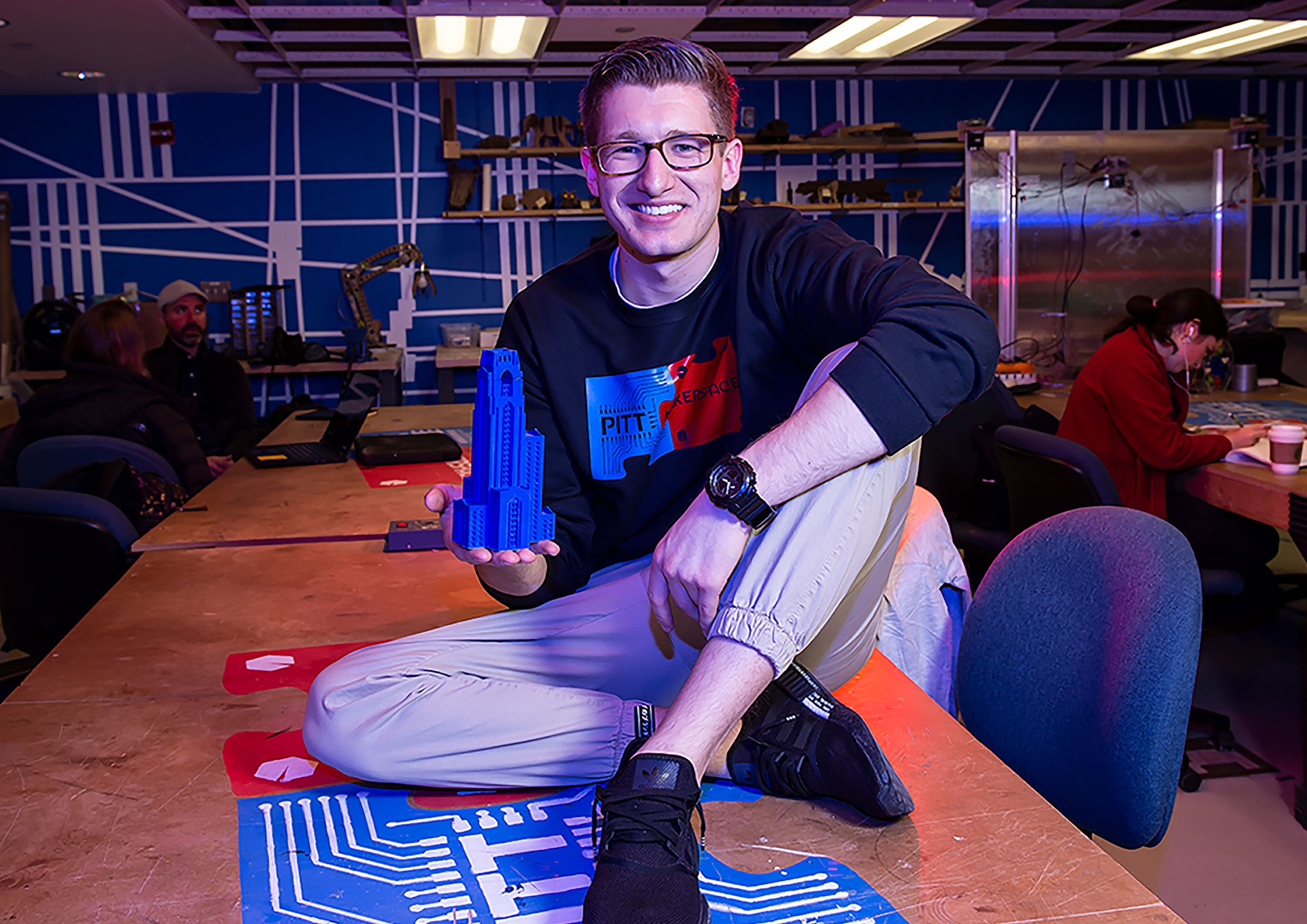 Sean O’Brien has helped make the Pitt Makerspace in Benedum Hall a place for prototyping projects — and careers. He’s graduating with a degree in mechanical engineering and beginning his career as an innovation engineer at a new Honda facility in Michigan. (Aimee Obidzinski/University of Pittsburgh)

Posted with permission. Read the original post at Pittwire.

The tagline on Sean O’Brien’s Instagram bio reads “Dedicated to leaving an impact.”

But over the course of his five years at Pitt, O’Brien is known more for making, not merely leaving, an impact — through his work at the Pitt Makerspace.

O’Brien, president of the Pitt Makerspace, is graduating with a bachelor’s degree in mechanical engineering and a certificate in innovation, product design and entrepreneurship from Pitt’s Swanson School of Engineering, as well as a resume that includes autonomous vehicle research made possible through several co-op rotations at Nissan.

In May, he’ll start work as an innovation engineer at a brand-new Honda facility in Michigan, after fielding job offers from several auto manufacturers.

He’s mapped his own career path — and paved the way for other students — admittedly not through a turbocharged grade point average, he said, but by his passion for hands-on learning, willingness to make connections and desire to solve problems.

O’Brien joined the Pitt Makerspace team early on as its sponsorship and outreach lead, a role in which he secured thousands of dollars in financial support and helped develop events designed to connect students with potential employers. “I have the ability to sell what I’m passionate about,” he said.

Boosted by connections made at the Stanford University-based national University Innovation Fellows program, he has helped grow the Makerspace from a basement space with little more than a few benches and sofas, a 3D printer and some tools into a vibrant hub for creating, innovating and, importantly, for networking.

O’Brien launched his own MakerHUB podcast, which has drawn notable guests — including Pitt Chancellor Patrick Gallagher — to the Makerspace sofas for a conversation.

The Pitt Makerspace served more than 1,000 students last year; a team of 30 keeps it running day to day. The suite has become a regular stop on prospective students’ campus tours, and now hosts alumni gatherings and events sponsored by industry partners.

O’Brien also has made a commitment to give back as a member of Pitt’s first cohort of Panthers Forward graduates. The new Pitt program pays up to $5,000 of each student’s federal loan debt. In exchange, upon graduation, participants are asked to pay it forward in support of future Panthers Forward students.

A passion in the making

O’Brien knew from the time he started high school that he wanted to be an engineer. As a teen, he persuaded his parents to let him build a table large enough to seat his extended family so they could dine together rather than in separate rooms at holidays. It took 200 hours of work, but the result is a massive 11-foot-long table that is the focal point in his family’s dining room in Reading, Pennsylvania.

“I realized what I could make with the proper resources and the proper help,” he said of the experience.

In his senior year at Muhlenberg High School, he launched his own small business, SO’s Bows, all because he couldn’t find a bow tie in the appropriate shade of blue to match his prom date’s dress. He designed his own, then stitched it himself on a home economics class sewing machine. After perfecting the process, he began selling ties made to order.

His interest in entrepreneurship led him to Pitt’s student innovation programming. He met Babs Carryer, director of Pitt’s Big Idea Center within the University of Pittsburgh Innovation Institute at a Startup Blitz event. He soon began working in her office — analyzing participation data in an effort to create strategies to engage students from all disciplines in Innovation Institute programming.

“When students come to Pitt, they don’t necessarily know what they want to do, but they figure it out,” Carryer said. “He’s a great example of an engineering student who discovers innovation and entrepreneurship as a result of being at Pitt. It is life-changing. He is going to be wildly successful, whatever he chooses to do.”

“He wants to merge creativity and entrepreneurship with engineering,” she said, commending his motivation and skill set.

“This is the dream job,” O’Brien said as he prepares for his new position in Michigan that will include creating a makerspace where his group can prototype concepts to bring to the overall organization. “I’m honored to have this opportunity. It’s a blank slate to decide what this facility means to Honda moving forward.”

And the wheels already are turning in his mind: “Ultimately I’d like to create an internship program between this Honda facility and the Pitt Makerspace,” he said.

“Providing value is the currency that leverages your next opportunity,” O’Brien said. “The return doesn’t need to be immediate. What I’m leaving behind is a platform for people to succeed.”

Leaving an impact? Those who know his work best say O’Brien is making it happen.