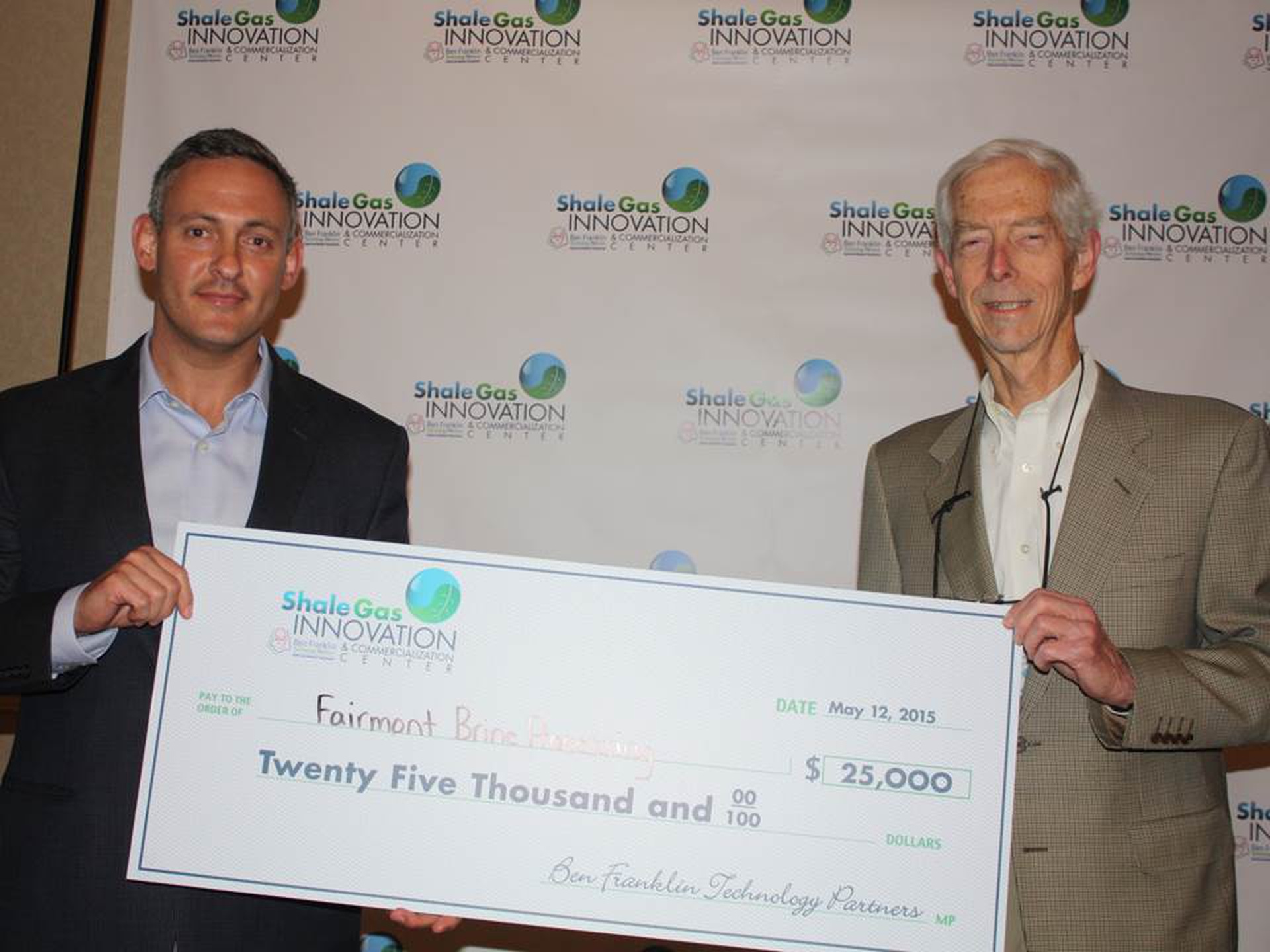 PITTSBURGH (May 13, 2015) … Fairmont Brine Processing, led by President and CEO Dave Moniot BSChE '91, was one of four winners of the Fourth Annual Shale Gas Innovation Contest, presented by the Shale Gas Innovation & Commercialization Center. Fairmont Brine Processing, which developed an evaporation and crystallization process that fully treats wastewater and extracts reusable byproducts, received a $25,000 prize during the award ceremony at Southpointe, Washington County, on Tuesday, May 12.

The award for Fairmont Brine Processing, based in Fairmont, WV, was made possible through a grant provided to the SGICC from the Benedum Foundation . Brian Kalt, General Manager commented, "We are humbled to be recognized by the Shale Gas Innovation & Commercialization Center. Winning this award validates the industry's necessity for an environmentally responsible alternative to deep well injection. Fairmont Brine Processing has executed another major step in the commercialization of our  patented evaporation & crystallization process, and we are looking forward to developing new opportunities with E&P companies as they seek a long term solution for the wastewater  produced in the natural resource extraction process."

"This is a very significant award for both Fairmont Brine and Venture Engineering because it really showcases our business and the panel of judges were comprised of industry insiders such as Consol Energy, Range, EQT, XTO (Exxon) and others," Mr. Moniot said.  "There were 14 strong entries this year, and so we're honored to be one of the four winners.

Michael Makowski, Manager of New Technology Initiatives at PPG Industries, a sponsor company and judge noted, "This event always uncovers creative new technologies that can positively impact the oil and gas industry. As a technology scout there is no better opportunity to see high caliber innovations on display at a single event focused on adding value to this important growth area."

About Fairmont Brine Processing
Fairmont Brine Processing, LLC is a closely held, multi-disciplined service provider to the oil & natural gas industry.  As the premiere environmentally responsible solution to the deep well injection of fluid produced from oil & natural gas operations, Fairmont Brine provides services to Exploration & Production companies throughout the Appalachian Basin ranging from the management of flowback and produced fluid created during the resource extraction process, recycle for re-use to aide in future drilling and hydraulic-fracturing operations and the production of sodium chloride rock salt and distilled water.

About the SGICC
The Ben Franklin Shale Gas Innovation and Commercialization Center supports and commercializes early-stage technologies that enhance responsible stewardship of the environment while properly utilizing this energy asset.