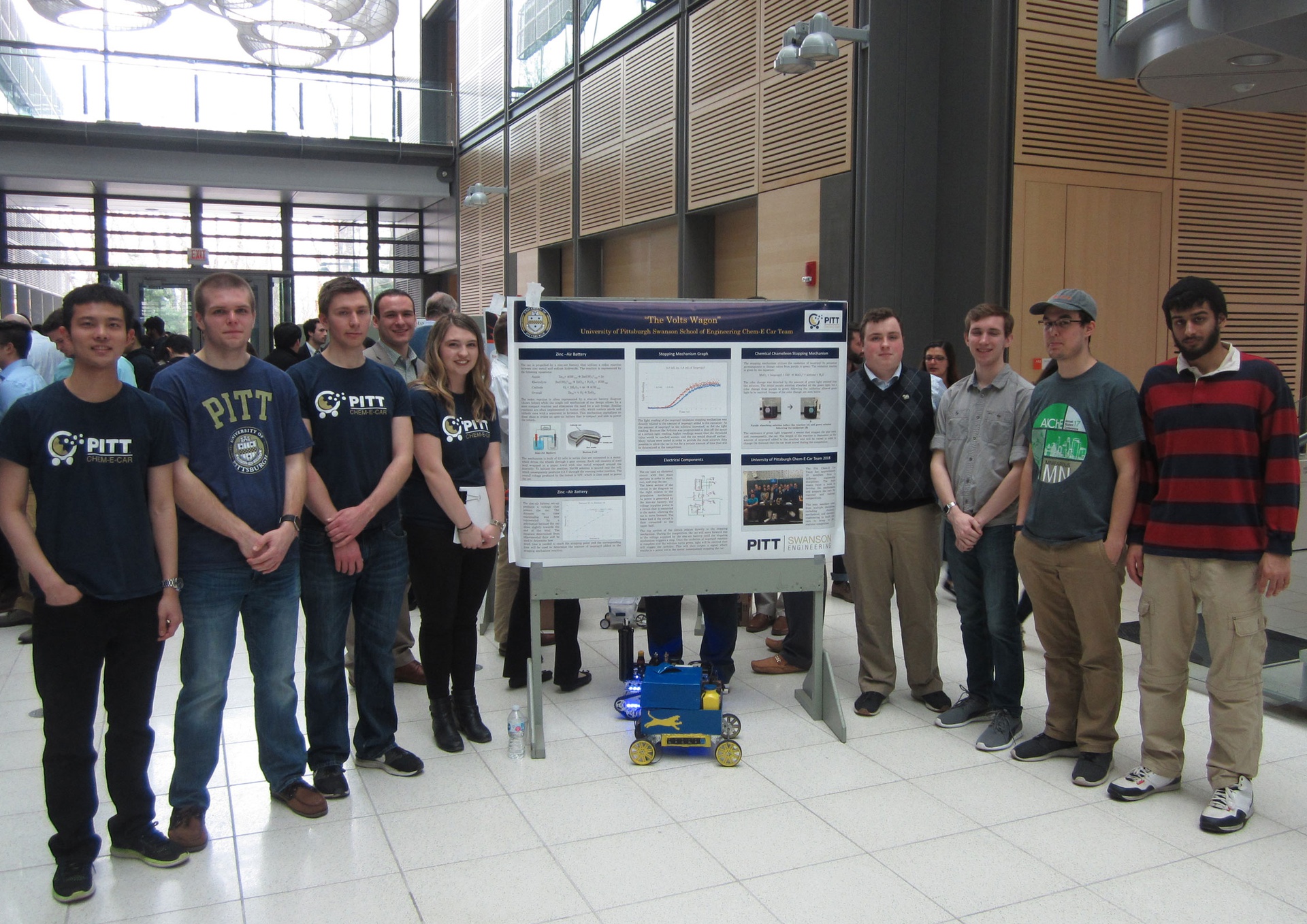 PITTSBURGH (April 25, 2018) … Runners, cyclists, and race car drivers can all benefit from visualizing themselves crossing the finish line before a competition. But what happens when they don’t know where the finish line will be? During the American Institute of Chemical Engineers (AIChE) Chem-E-Car Competition, student engineers spend months designing a shoebox-sized car powered by chemical reactants that can travel a distance between 50 and 100 feet, but judges don’t reveal that distance until an hour before the competition.

Before the conference, the teams only knew they had to create a car able to travel somewhere between 15 and 30 meters (about 50 – 100 feet) while carrying a payload between zero and 500 milliliters of water (about zero – 1.1 pounds). The car had to be powered by chemical reactants and include a second chemical reaction as a stopping mechanism. It had to go the distance, but it would be disqualified for overshooting the distance by too much.

On the day of the competition, the judges revealed the target distance would be 60.4 feet and the cars had to carry a payload of 400 milliliters of water. The Pitt students’ car featured a zinc air battery and a chemical chameleon stopping mechanism. It passed safety tests for pressure, gases, temperature, exhaust, and chemicals.

The judges also evaluated the cars based on creativity of the design and incorporation of green engineering principles. Students completed safety training and submitted an Engineering Documentation Package containing equipment specifications, material safety documentation sheets, and other information about their design. The morning of the competition, the teams presented posters detailing research they conducted to create their cars.

After the judges gathered all of their evaluation data and The Volts Wagon completed its run, the Pitt students finished in fourth place in a field of 19 teams.

Members of the Pitt AIChE student chapter received donations from alumni, family, and friends to pay for conference expenses through the Pitt ENGAGE crowdsourcing platform. The Chem-E-Car team also received support from Lubrizol, BASF Corporation, the Chemical and Petroleum Engineering Department, and the Student Government Board (SGA).

About AIChE
Founded in 1908, the American Institute of Chemical Engineers (AIChE) is a nonprofit organization providing leadership to the chemical engineering profession. Representing 57,000 members in industry, academia, and government, AIChE provides forums to advance the theory and practice of the profession, upholds high professional standards and ethics, and supports excellence in education. Institute members range from undergraduate students, to entry-level engineers, to chief executive officers of major corporations.