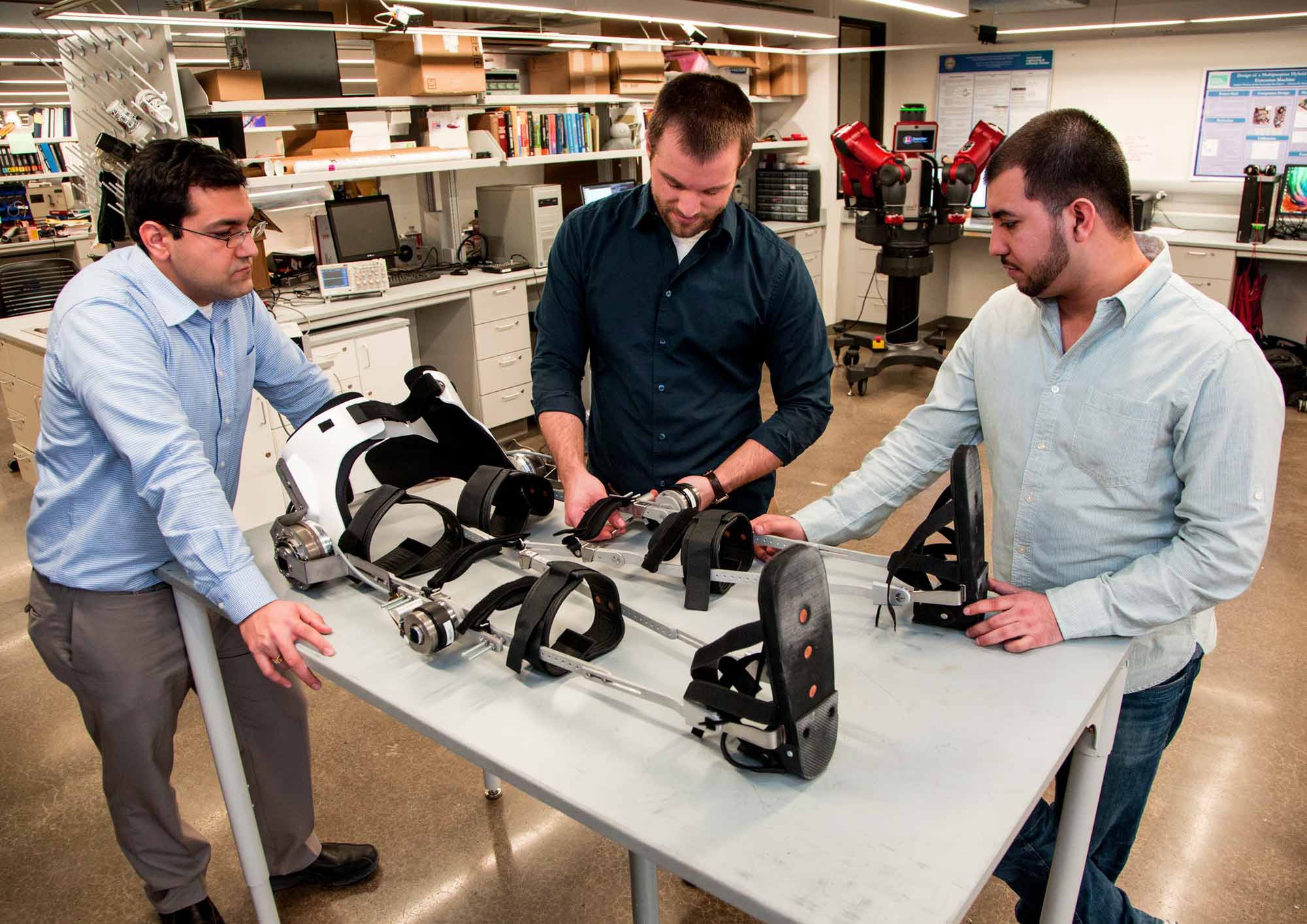 PITTSBURGH (September 22, 2015) … Outside of sci-fi, the idea of donning a bionic suit, rocketing into the sky, and saving the world hasn't quite gotten off the ground; however, two new grants totaling $500,209 from the National Science Foundation (NSF) will help researchers at the University of Pittsburgh make great strides in helping paraplegics walk while wearing a mechanical exoskeleton.

Nitin Sharma, assistant professor of mechanical engineering and material science at Pitt's Swanson School of Engineering, will lead the research on walking exoskeletons-mechanical frames placed over parts of the human body. They work in unison with the body, like armored insect shells, to facilitate or enhance tasks like walking and lifting heavy objects. Researchers are beginning to find applications for powered and unpowered exoskeletons in a variety of fields, including rehabilitation science, the military, and general consumer technology.

Sharma will focus on optimizing the potential of two prevalent technologies used for mechanically assisted walking: functional electrical stimulation (FES), which uses low-level electrical currents to activate leg muscles, and powered exoskeletons, which use electric motors mounted on an external frame to move the wearer's joints. The resulting hybrid aims to capitalize on the best of both systems.

"We are trying to combine electrical stimulation with robotics to design a control system for a hybrid exoskeleton," said Sharma. "It's like a hybrid car switching between a gas engine and an electric motor depending on circumstance. The algorithms we are developing determine when to use power from FES and when to use the power from the motors on the frame."

The first grant comes from the General and Age-Related Disabilities Engineering Division of NSF . UNS: Optimal Adaptive Control Methods for a Hybrid Exoskeleton will investigate a new class of control algorithms that adapt to allocate optimized control inputs to FES and electric motors during single joint movements.

The Civil, Mechanical and Manufacturing Innovation Division of the NSF will fund Coordinating Electrical Stimulation and Motor Assist in a Hybrid Neuroprosthesis Using Control Strategies Inspired by Human Motor Control . In this study, Sharma will research control algorithms to determine an optimal synergy between FES-induced multi-joint movements and movements aided by a powered exoskeleton.

Both projects will examine the efficiency of exoskeleton technology for manufacturers hoping to develop new hybrid models that take advantage of FES technology, powered frames, and robotics.

"Current exoskeleton research is using devices completely powered by electric motors. They have huge battery packs and can only provide a maximum of about an hour of continuous walking. With FES, you are using a person's own muscles to make that person walk. FES also has been shown clinically to improve cardio-vascular fitness, increase muscle strength, and prevent atrophy," said Sharma.

In addition to his role as assistant professor at Pitt, Sharma heads the Neuromuscular Control and Robotics Laboratory (NCRL), where researchers are also developing similar structures for upper limb stimulation. These devices may benefit rehabilitation and therapy services by performing repeated or extended tasks-often consuming several hours-for physical therapists. Researchers may be able to apply an algorithm similar to the one balancing external power and electrical stimulation in walking exoskeletons to devices that help patients recovering from a stroke relearn skills lost to brain damage.

Sharma received his PhD in mechanical and aerospace engineering from the University of Florida. He joined the Department of Mechanical Engineering and Material Science at Pitt as an assistant professor in 2012.