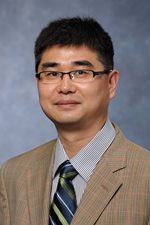 PITTSBURGH (September 15, 2016) … The Institute of Electrical and Electronic Engineers (IEEE), the world’s largest association of technical professionals, has chosen the University of Pittsburgh’s Guangyong Li as its 2017-2018 Vice President for Conferences for the IEEE Nanotechnology Council (NTC).

Li, associate professor of Electrical and Computer Engineering at Pitt’s Swanson School of Engineering, was one of three new officers announced at the NTC’s International Conference on Nanotechnology on August 22 in Sendai, Japan. Council members from the 22 IEEE Societies gather annually to elect new officers. All positions are effective as of January 1, 2017.

About Guangyong Li
Guangyong Li received his BS degree in mechanical engineering from Nanjing University of Aeronautics and Astronautics and his MS degree in control theory and application from the Beijing Institute of Control Engineering in the China Academy of Space Technology. He received his PhD in electrical engineering from Michigan State University. His research interests center on nanostructured thin film solar cells; scanning probe microcopy; micro/nanorobotics systems; nanodevices and biosensors; control theory and applications; and real-time design and integration. In 2006, he received the IEEE Transactions on Automation Science and Engineering Best Paper Award.

In addition to his contributions in academia, Li gained industrial experience by working for the Beijing Institute of Space Mechanical and Electrical Engineering in the China Academy of Space Technology from 1992-1996 and Beijing Hollysys Corporation in 1999.