In Pursuit of Inclusive Excellence

WHEELING, W.V. (Aug. 28, 2019) — Graduate school isn’t just about earning a degree. It’s about a shared experience, a community of scholars sharing little moments of connection across cultures. And that means learning to grow and thrive as a diverse team.

That was the message at the 2019 PITT STRIVE retreat, which took place at Oglebay Resort and Conference Center on Aug. 8 and 9. The fourth annual retreat brought together Swanson School of Engineering faculty mentors and PhD mentees from the PITT STRIVE program, which strives for excellence in academic and faculty engagement cultures that promote the success, transition, representation, innovation, vision, and education of URM PhD students. The program supports underrepresented students as they transition into doctoral engineering programs at the Swanson School, and fosters an inclusive environment that supports their retention and graduation by strong graduate students and faculty community building activities.

“PITT STRIVE’s annual retreat gives our fellows and scholars the opportunity to cultivate relationships that will carry them forward into their professional and academic pursuits,” says Sylvanus Wosu, PhD, associate dean for diversity affairs. “A culture of inclusivity is invaluable in academia, and we all have a vital role to play in building it.” The retreat’s goal was clear from the first session. Michael Eatman, a diversity professional who helps organizations develop cultural competence and inclusive learning and working environments, led sessions designed to break down barriers and foster discussion about what inclusivity and diversity truly mean.

What We Do Not See

Eatman asked the group to find one individual that they do not work with on a regular basis for an exercise called “What We Do Not See.” In this team-building activity, partners looked at one another for two minutes without speaking and took note of the observations and assumptions they made about their partner.

“Part of the work building community is being able to honestly share with those we are in community with,” Eatman noted. “Getting to the heart of community is moving through the use of our observations and assumptions as the only reality. Some of our work may be to create communities that allow room to discover who is beneath the facade we learn to put on for survival in institutions.”

Some of the participants found this activity to be the most meaningful at the retreat.

“I found this activity so significant because not only did I get to learn about another person, but I also gained a new tool to use in order to confront my own biases that I may have about people from now on,” said Isaiah Spencer-Williams, a civil engineering alumnus and rising graduate student. “As a community builder, I think building relationships and getting comfortable enough with people to have real conversations is a quintessential skill that a lot of people aren’t willing to invest into.”

Eatman likened the dichotomy between diversity and inclusion to an hourglass, with “diversity” at the top and “inclusion” underneath. The bottleneck prohibiting the free flow of sand from one to the other was marked “share, respect, appreciate.” In order to navigate intercultural perspectives, he explained, we must pursue a shared goal, respect one another’s identity and appreciate cultural differences.

“We have to be able to talk openly about diversity,” said Eatman. “We need to be soft on people, but hard on barriers to inclusion.”

Building Communities and Ecosystems, Not Silos

James R. Martin II, PhD, U.S. Steel Dean of Engineering, also discussed building community, specifically how participants can work together as a team to pioneer a new educational paradigm. He discussed how higher education is being disrupted and how as a greater community, we need to determine what we value in education.

“We are all a part of the same community to help solve these challenges,” he said. “Universities are supposed to be platforms of upward social mobility. By not investing in higher education, we are undervaluing the creation of new knowledge.”

In order to thrive, he said, higher education must value diversity: “Diversity is critical because you need the gathered perspective that not one person has,” he said. “We must build communities and ecosystems in higher education, not silos.”

Medeva Ghee, PhD, executive director of the Leadership Alliance and an assistant professor of behavioral and social sciences at Brown University, delivered the keynote address this year. Her talk, entitled “The Leadership Alliance: Removing Barriers to Accelerate the Diversification of the Research Workforce,” discussed the lack of diversity in academia and research communities, and the importance of addressing this concern.

The Leadership Alliance, a national consortium of 35 institutions of higher education, provides programming to develop underrepresented students into thought leaders in academia and industry. Programs like this one, she explained, remove barriers that prevent underrepresented students from pursuing careers in academia and in research, such as workshops on how to market oneself for research careers, training activities for faculty to learn to recruit and retain diverse talent, and grant writing coaching groups to provide opportunity for junior faculty from minority-serving institutions to develop proposals to fund research.

“These barriers are not new and have existed for decades,” said Sossena Wood, BSEE ‘11 PhD BioE ‘18, Presidential Postdoctoral Fellow in Biomedical Engineering at Carnegie Mellon University. “It becomes very discouraging at times but supportive networks like the Leadership Alliance allow us to have a community that is equally invested in our success. As much as programs like the Leadership Alliance support the development of URM graduate students for post-graduate careers in academia and research, continual work and partnership must evolve to reform the environments in which we choose to work.”

Ghee also led a workshop titled “Faculty as Change Agents: You Got This!” The workshop provided a toolkit that can promote institutional change in diversity and inclusion. Building a culture of change starts with collaboration, an ecosystem informed by a university-wide strategic plan and evidence-based programs.

“My biggest takeaway from the retreat was that in order to continue to build an inclusive and integrated community in the Swanson School of Engineering, efforts like this need to be supported and mobilized,” says Spencer-Williams. “The dean often talks about being the pioneers of a new educational system, and I think having conversations surrounding not only inclusivity, but also realistic integration can help make that transition.”

After Ghee’s keynote address, Eatman reconvened with the group to help them gather their thoughts and discuss their response to the topics that were addressed throughout the day. The group then recognized four former PITT STRIVE fellows with the Pacesetter Award: Brandon Jennings, MSCoE ‘16, PhD ECE ‘19; Harold Rickenbacker, PhD CEE ‘19; Florencio Serrano Castillo, PhD ChemE ‘19; and Dr. Wood. The award honors them for serving as a role model in the PITT STRIVE community and for their commitment to the success of underrepresented minority graduate students in the Swanson School.

This year’s PITT STRIVE retreat enacted the “Five I’s of Inclusive Excellence” during its two-day run. The community got a chance to come together and solidify its identity. Attendees interacted with one another, asking tough questions and learning about one another’s experiences. The speakers revealed ways to get involved in creating a more inclusive culture and have a real impact on the environment at Pitt. 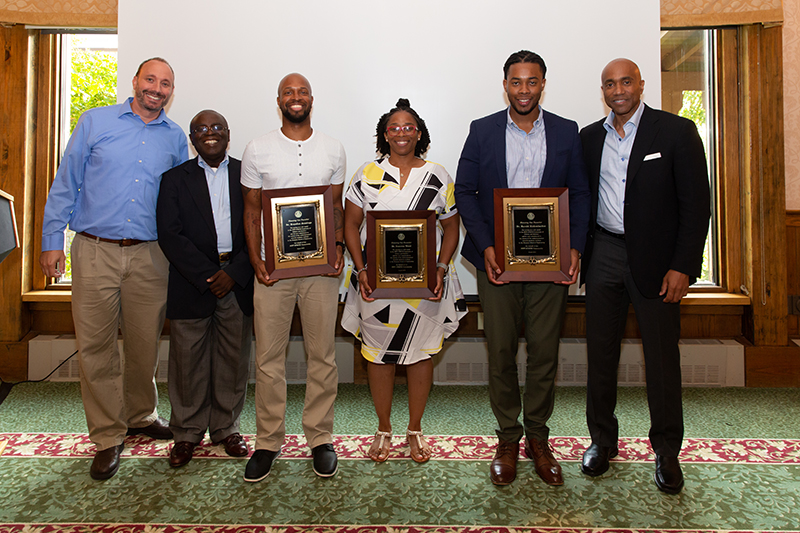 Brandon Jennings, PhD
Jennings, a senior system engineer for Raytheon in Tucson, Ariz., was the first PITT STRIVE Fellow to graduate from the program. He participated in numerous programs encouraging diversity in STEM, teaching robotics for three years for the INVESTING NOW program at Pitt. Jennings published six papers and won several awards during his time at Swanson, including K. Leroy Irvis Fellowship, the AGEP/PITT-STRIVE Fellowship and Chuck Cooper Foundation Scholarship.

Harold Rickenbacker, PhD
Rickenbacker enrolled in the Pre-PhD Program offered by the Office of Diversity at Swanson in 2014. During his time at Swanson, he was awarded the Senior Vice Chancellor for Engagement’s Partnerships of Distinction Award in 2019, the National Science Foundation Emerging Frontiers in Research and Innovation Scholar Grant Supplement Award in 2018, the Climate & Urban Systems Partnership: Research Grant in 2017, the Mascaro Center for Innovation Grant Award in 2016, and the Heinz Endowments Next Oxygen-eration Grant Award in 2015. He published six papers, two of which list him as first author.

Florencio Serrano Castillo, PhD
Serrano Castillo joined the Department of Chemical and Petroleum Engineering at Pitt as a PITT STRIVE Fellow in 2014. While earning his doctorate, Serrano Castillo was first author on two peer-reviewed publications and presented his work at several national and international conferences. He joined Fourth Rivers Consulting, where he participated in several engagements for healthcare startups in the Pittsburgh area. He was also part of the winning team of the Pitt Challenge Healthcare Hackathon. Serrano Castillo served two years as vice president of the Chemical Engineering Graduate Student Association, two years as the Chemical Engineering Department Representative to the Engineering Graduate Student Organization, and one year as the Graduate Student Representative for Pitt SHPE. Serrano Castillo will be starting a new role in industry as a clinical research scientist with Amgen at the Clinical Pharmacology, Modeling and Simulations division, developing system pharmacology models for the development of large molecule therapeutics for various indications.

Sossena Wood, PhD
Wood is a Presidential Postdoctoral Fellow within the Biomedical Engineering department at Carnegie Mellon University. As she earned her doctorate in bioengineering at Pitt, she was a PITT STRIVE Fellow and a K. Leroy Irvis and National GEM Consortium Fellow. Additionally, Wood won a number of awards, including being one of the University of Pittsburgh’s Rising African American Leaders, the National Institutes of Health F31 award, the New Pittsburgh Courier’s FAB 40, NSBE’s 2017 Mike Shinn Distinguished Member of the Year award, and Professional Women’s Network award. She served two terms as the National Chairperson of the National Society of Black Engineers. She is committed to engaging and empowering underrepresented youth to pursue STEM degrees locally and globally.

In Pursuit of Inclusive Excellence