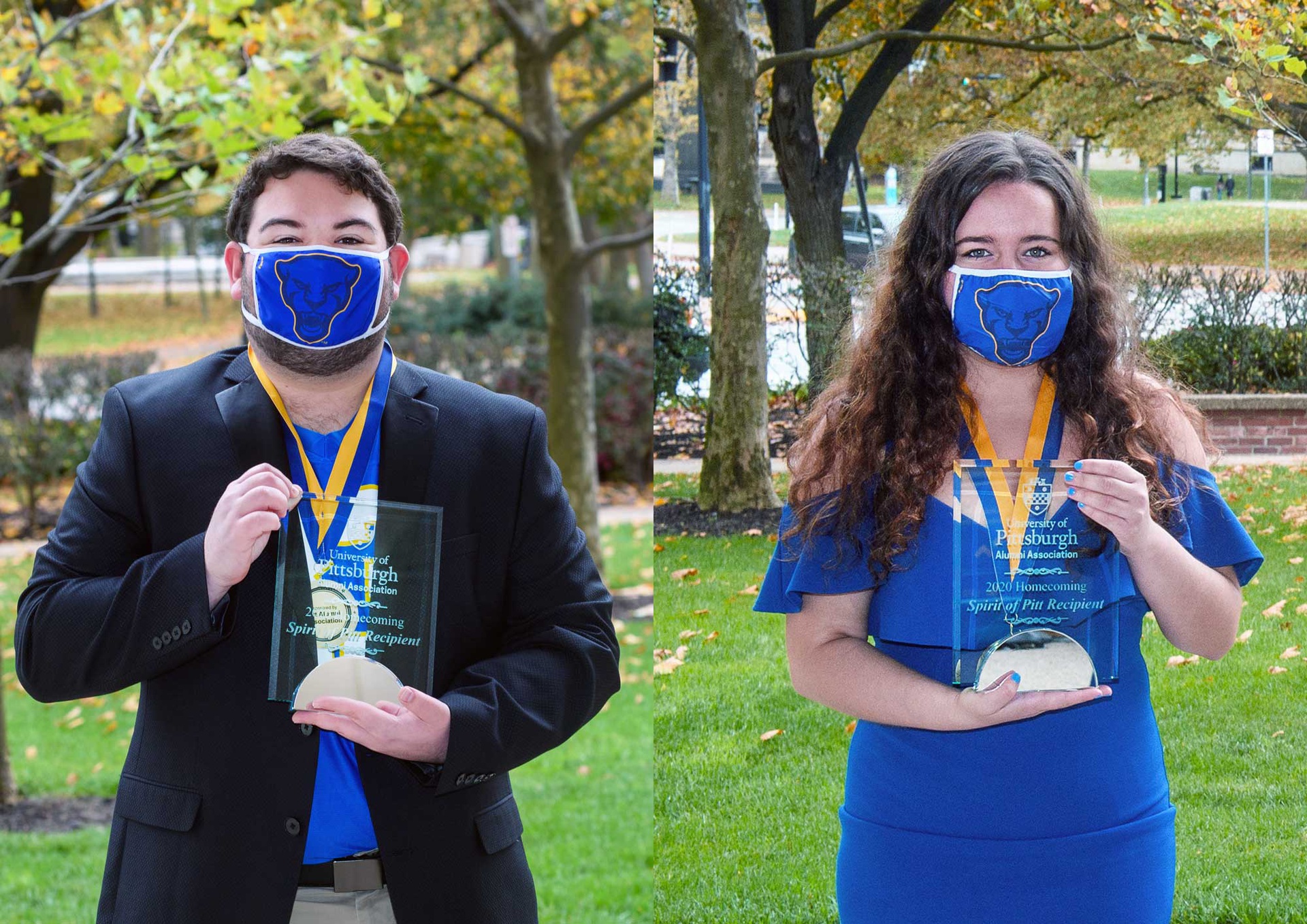 This story originally appeared in Pittwire. Reposted with permission.

On Saturday, Oct. 24, the Pitt Alumni Association began a new chapter of the University’s Homecoming tradition: Alexis Zito and Jonathan Perlman, both mechanical engineering majors in the Swanson School of Engineering, were the first students to win the Spirit of Pitt award. The award, which comes in the place of the titles Homecoming king and queen, aims to creative a more inclusive tradition that emphasizes the diversity of and pride in the Pitt community.

In conjunction with the Blue & Gold Society and the Student Alumni Association, the Pitt Alumni Association reimagined what it means to be a part of Pitt’s Homecoming Court—removing the award’s focus on royalty and the construct of a gender-binary and instead creating a tradition that more pointedly celebrates Pitt’s values of service, spirit and social justice.

Although the coronavirus pandemic prevented the traditional on-field awards ceremony at Heinz Field, the history-making announcement, which featured blue and silver confetti poppers and a pregame special message Tweeted out by Chancellor Patrick Gallagher, was live-streamed via the Heinz Field Jumbotron as well as Pitt’s social media channels. And out of 10 finalists in the Homecoming Court, the two winners happened to be campaign partners.

“We had mutual friends but had never really talked” before becoming Homecoming Court finalists, said Perlman of Zito. As the only two engineering students as finalists for the award, they saw an opportunity to work together.

During his early years at Pitt, Perlman, a fifth-year student from Long Island, was quick to bleed blue and gold, showing his support for Panthers football in the front row of the student section of Heinz Field.

But after the October 2018 shooting at Tree of Life synagogue in Squirrel Hill, Perlman’s involvement in the Pitt and Pittsburgh communities took on deeper meaning. As part of the executive board of Zeta Beta Tau, a Jewish fraternity, Perlman helped organize a fundraiser in response to the tragedy, helping to raising $10,000 for the Jewish Federation of Greater Pittsburgh. He is also on the board of Engineering Student Council and part of the leadership society Omicron Delta Kappa.

“The campus has really refined me,” Perlman said of his time at Pitt and of how he has come to embody the Spirit of Pitt. “I really like the new meaning behind [the award]… I think it’s great.”

Zito’s connection to Pitt began with her parents, who met as engineering students at Pitt. After Zito attended high school at Pittsburgh Science and Technology Academy—located directly next to the Swanson School of Engineering’s Benedum Hall in Oakland—Pitt was already such a big part of her life that it felt like her perfect collegiate fit.

Moving forward, Zito hopes to carry the “Spirit of Pitt” with her through graduation and beyond.

“The award has given me…confidence,” she said “I can achieve anything if I work hard to make it happen, which is one of the ideals that I think really embodies the Spirit of Pitt. I plan to carry this message, and all of the positive messages of Pitt, with me in my life.”