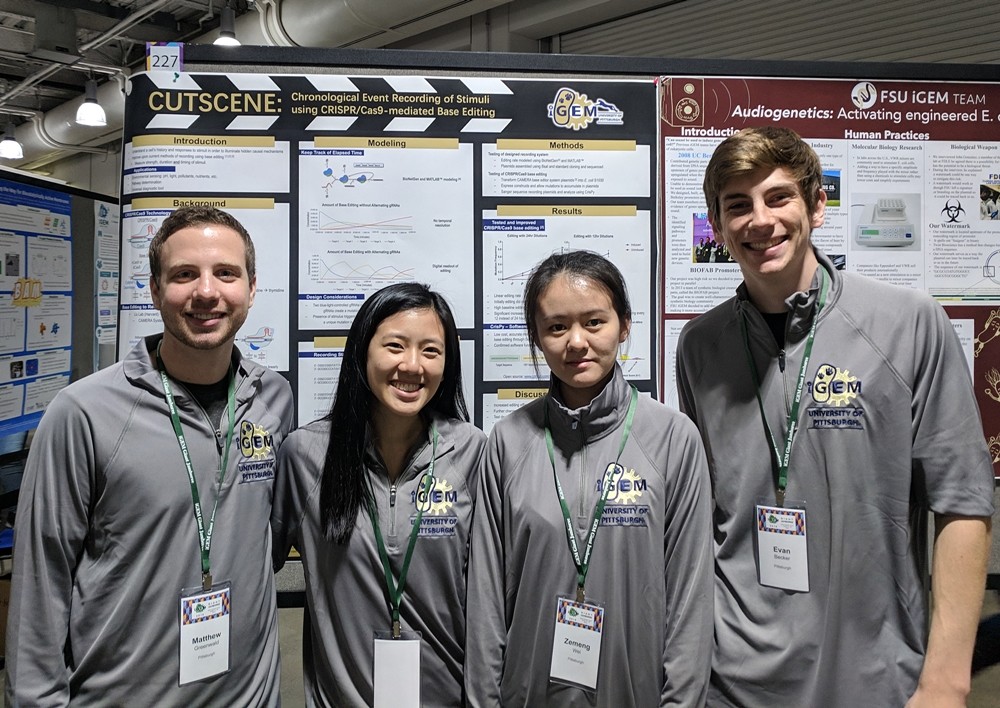 PITTSBURGH (January 29, 2019) … The ability to measure and record molecular signals in a cell can help researchers better understand its behavior, but current systems are limited and provide only a “snapshot” of the environment rather than a more informative timeline of cellular events. In an effort to give researchers a complete understanding of event order, a team of University of Pittsburgh undergraduate students prototyped a frame-by-frame “video” recording device using bacteria.

The group created this project for the 2018 International Genetically Engineered Machine (iGEM) competition, an annual synthetic biology research competition in which over 300 teams from around the world design and carry out projects to solve an open research or societal problem. The Pitt undergraduate group received a silver medal for their device titled “CUTSCENE.”

CUTSCENE aims to show a “video” of cellular activity by recording events in the cell using modified CRISPR/Cas9 technology. Hu said, “By knowing what time molecular events are happening inside of a cell, we are able to better understand a cell's history and how it responds to external stimuli.”

Their system improved upon older methods that could only record the levels of stimuli at a single point in time. They used a movie analogy to illustrate their objective.

“Try guessing the plot of a movie by looking at the poster; you can get an idea of what is going on, but to really understand the story, you need to watch the film,” said Becker. “Unless researchers are taking many snapshots of the cellular activity over time, the image doesn’t give any sense of causality. You can see that the molecule is there, but you don't know where it has been or where it is going.”

For their project, the iGEM team used modified CRISPR/Cas9 technology called a base editor. The CRISPR/Cas9 system contains two key components: a guideRNA (gRNA) that matches a specific sequence of DNA and a Cas9 protein that makes a cut at the specific sequence, ultimately leading to the insertion or deletion of base pairs - the building blocks of DNA. In addition to these components, a CRISPR/Cas9 base editor contains an enzyme called cytidine deaminase that is able to make a known single nucleotide mutation at a desired location of DNA.

“We achieved a method of true chronological event recording by introducing recording plasmids with repeating units of DNA and multiple gRNA to direct our base editor construct,” said Hu. “This technique will provide an understanding of the order in which molecules and proteins appear in systems.”

“A recording plasmid can be thought of as a roll of unexposed film, with each frame being an identical sequence of DNA,” explained Wei. “A single-guideRNA (sgRNA) directs the CRISPR/Cas9 base editor to move along the recording plasmid, making mutations at a timed rate and constantly shifting which frame is in front of our base editor. Activated by the presence of a stimulus, another sgRNA can mark the current frame.”

The iGEM team’s approach to this technology will allow them to figure out which molecules are abundant at specific times and perhaps reveal hidden, causal relationships. The information gathered from the device has many potential applications and may allow researchers to develop medicines and therapies based on the timing of the cellular malfunction.

“The team did a tremendous amount of lab work over the summer, implementing the cellular event recording methodology,” said Alex Deiters, a professor of chemistry at Pitt who helped advise the iGEM team. “Most importantly, the students developed this clever idea on their own by first identifying a current technology gap and then applying modern gene editing machinery to it. The silver medal is well-deserved!”