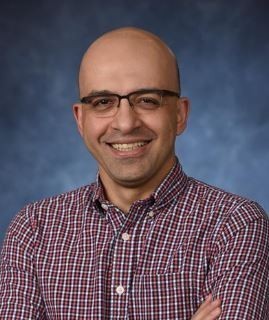 Hessam Babaee, MEMS professor, is the recipient of the National Institute of Health (NIH) R21 Trailblazer award for his project titled Enhanced Clinical Diagnosis through Imaging and Modeling: A Machine Learning Data Fusion Framework. The R21 grant mechanism from the NIH is intended to encourage exploratory/developmental research by providing support for the early and conceptual stages of project development.

This is a multi-PI project and Professor Babaee will work in collaboration with Professor Kaveh Laksari from the University of Arizona.

The goal of the project is to enhance clinical diagnosis of ischemic stroke by developing a machine learning framework to combine CT perfusion (CTP) images with physics-based computational models. Professor Babaee notes the importance of this project on reducing radiation exposure, “CTP provides gold standard information for stroke care, however, it exposes the patient to a significant amount of radiation and it has limited space-time resolution. On the other hand, clinical adoption of physics-based models as the only diagnosis tool requires significant evidence to convince regulatory agencies to approve clinical trials. This has led to a search towards ``the perfect model'', which has proven elusive so far, and might remain so for years to come. Our goal is to synergistically use the “imperfect ‘' physics-based model with medical imaging to reduce the radiation exposure.” If successful, the developed framework could be utilized in other medical applications, in which clinical data and physics-based models can be combined.

This award comes shortly after two other recent grants earned by Professor Babaee. The first, funded by the Air Force Office of Scientific Research (AFOSR), is titled Optimal Physics-Informed Bases for High-Dimensional Evolutionary Systems. He is the sole PI on this award.