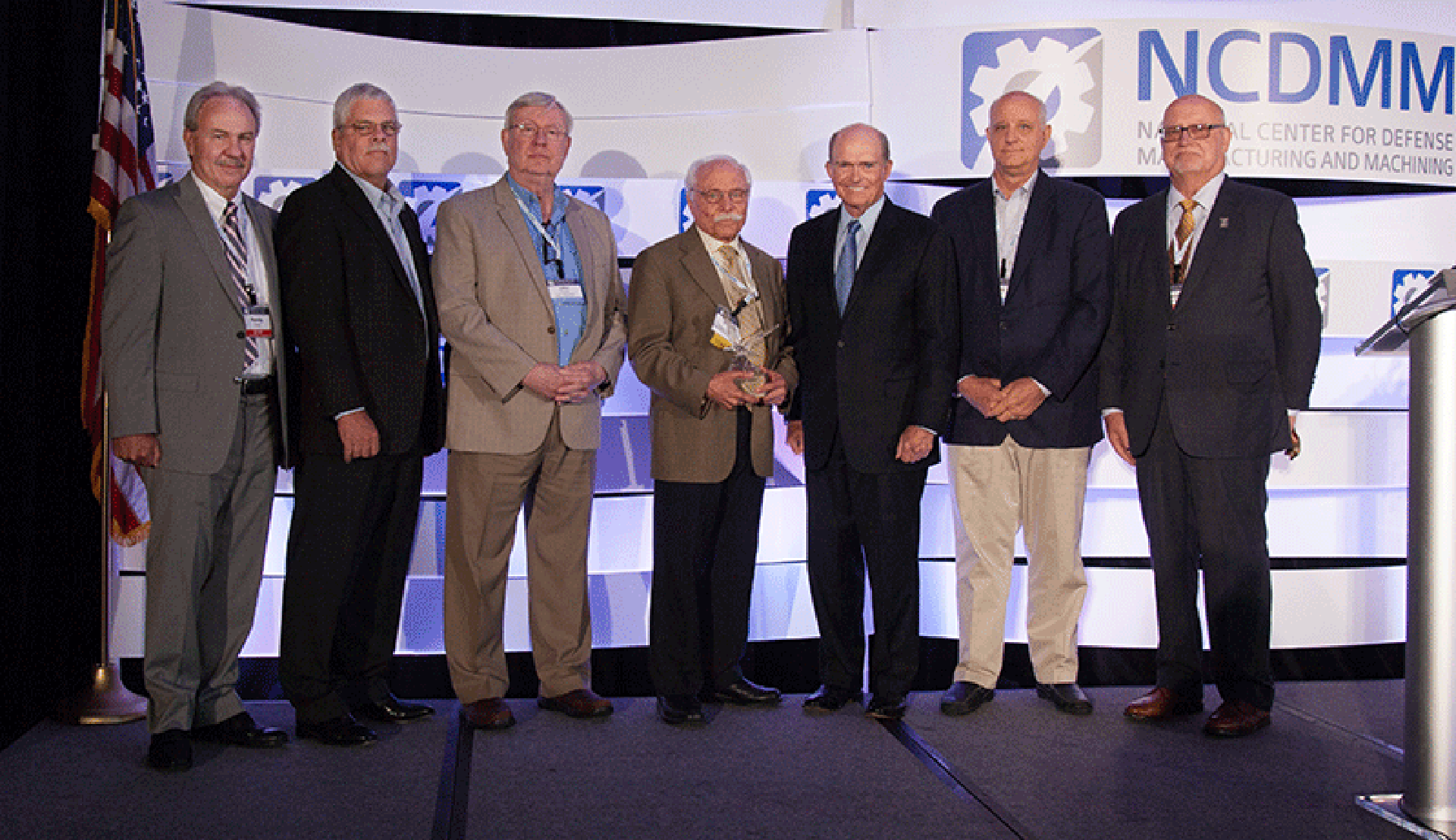 Reposted from the National Center for Defense Manufacturing and Machining (NCDMM). View the article here.

Blairsville, Pa. — May 9, 2018. The National Center for Defense Manufacturing and Machining (NCDMM) proudly announces that today at its annual SUMMIT event, it awarded its highest honor, the Lawrence J. Rhoades Award, to Howard A. Kuhn, Ph.D., P.E. Each year, the NCDMM awards the Lawrence J. Rhoades Award to an individual who shares Mr. Rhoades’ tireless commitment, futuristic vision, and unwavering dedication to the defense manufacturing industry.

“On behalf of all of us at the NCDMM, I am most honored to present the Lawrence J. Rhoades Award to our long-time friend and esteemed colleague, Dr. Howard Kuhn,” said NCDMM President and Executive Director Ralph Resnick. “Throughout his illustrious 50-year career, Howard has been a force within both the manufacturing industry and academic institutions, serving as an esteemed, innovative thought-leader and mentor. Howard also shares many of the same extraordinary qualities as Larry Rhoades and namesake of this award. You could say they are cut from the same cloth. Like Larry, Howard is also a visionary, as well as a collaborator in the truest sense of the word, possessing an almost effortless ability to bring and inspire mutual efforts together to advance manufacturing technology for the betterment of our industry. He has set a standard that many aspire to meet.

“Therefore, in recognition of his tireless commitment, steady leadership, dedication, and actions on behalf of the national manufacturing community and the mission of NCDMM, we congratulate Dr. Howard Kuhn as the 2018 NCDMM Lawrence J. Rhoades Awardee,” continued Mr. Resnick.

NCDMM established the Lawrence J. Rhoades Award to honor the memory of Mr. Rhoades whose entrepreneurial spirit and dedication to the advancement of manufacturing processes was known industry-wide. Mr. Rhoades was one of the founding fathers of the NCDMM, and an inaugural member of the Board of Directors where he served until his untimely death in 2007.

Dr. Kuhn also serves as a consultant at local industry-leading organizations, including America Makes, the National Additive Manufacturing Innovation Institute, which is managed by the NCDMM, and The Ex One Company. At America Makes, he is a Technical Advisor, teaching a course, titled “Fundamentals of Additive Manufacturing Materials and Processes.” Upon its founding in August 2012, Dr. Kuhn also served as the Acting Deputy Director of Advanced Manufacturing Enterprise. At Ex One, he is currently a Research Consultant, but also previously served as the Director of Prometal Technology for Ex One.

Previously, Dr. Kuhn, as the co-founder of Concurrent Technologies Corporation (CTC), served as the company’s Vice President and Chief Technology Officer for 12 years. He also co-founded Deformation Control Technology, a consulting firm serving the metalworking industry. Prior to this, Dr. Kuhn held joint appointments in the Department of Mechanical Engineering and the Department of Material Science at Drexel University and the University of Pittsburgh.

Dr. Kuhn is a Fellow of the American Society for Materials International and SME. In 2008 and 2011, respectively, he received the ASM Gold Medal and the SME Eli Whitney Productivity Award. In 2014, America Makes awarded Dr. Kuhn with its Distinguished Collaborator Award for his exceptional commitment and dedication to advancing additive manufacturing technology, practices, and innovation in the manufacturing industry through collaborative partnerships and contributing to the overall mission of America Makes.

Dr. Kuhn is a graduate of Carnegie Mellon University and pursued all of his undergraduate, graduate, and doctorial degrees in mechanical engineering at the university. He is a registered professional engineer in Pennsylvania.

NCDMM delivers optimized manufacturing solutions that enhance the quality, affordability, maintainability, and rapid deployment of existing and yet-to-be developed defense systems. This is accomplished through collaboration with government, industry, and academic organizations to promote the implementation of best practices to key stakeholders through the development and delivery of disciplined training, advanced technologies, and methodologies. NCDMM also manages the national accelerator for additive manufacturing (AM) and 3DP printing (3DP), America Makes—the National Additive Manufacturing Innovation Institute. For additional information, visit NCDMM at ncdmm.org.