PITTSBURGH (August 10, 2016) … The National Science Foundation (NSF) has awarded Vikas Khanna, assistant professor of civil and environmental engineering at the University of Pittsburgh Swanson School of Engineering, with a $259,582 grant to investigate the impact of declining insect-mediated pollination on the United States economy.

Previous studies on insects that carry pollen from flower to flower generally focus on agricultural yields. “Collaborative Research: Quantifying the Critical Importance of Insect-mediated Pollination Service for the U.S. Economy” will expand the research to the impact of these insects on associated industrial sectors.

Christina Grozinger, distinguished professor of entomology and director of the Center for Pollinator Research at Penn State University, will join Khanna on the study. Grozinger lend her expertise in pollinator biology and health to complement Khanna’s understanding of sustainability science and engineering. Penn State will receive an additional $80,000 from NSF.

Prior to receiving the grant from NSF, Khanna published a paper describing some preliminary results on this topic in the December issue of Environmental Science and Technology. The paper was selected as the First Runner Up for the Best Papers of 2015.

The researchers anticipate this study to lead to a greater appreciation of the role of surrounding ecosystems on the development of economic products and services, with an emphasis on the need to conserve pollination species, including honey bees and other wild insects.

“Understanding the economic value of pollination services attributable to managed honeybees and wild insects will help highlight the critical importance and dependence of the U.S. economy on pollinators and the role played by pollinators in sustaining human and industrial activity. Additionally, estimating economic value of insect pollination is likely to help set a higher priority for conservation,” said Khanna.

Image below: Decline in Honey Bee colonies in the U.S. over time based on data available from the United States Department of Agriculture. Click here to download a high-resolution file. 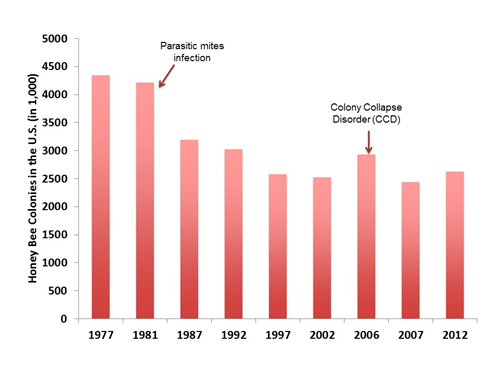 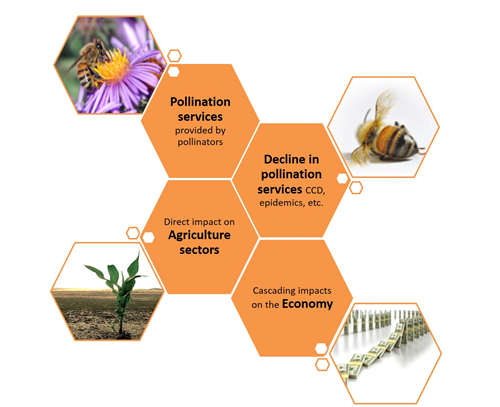