Of Bicycles and Glaciers 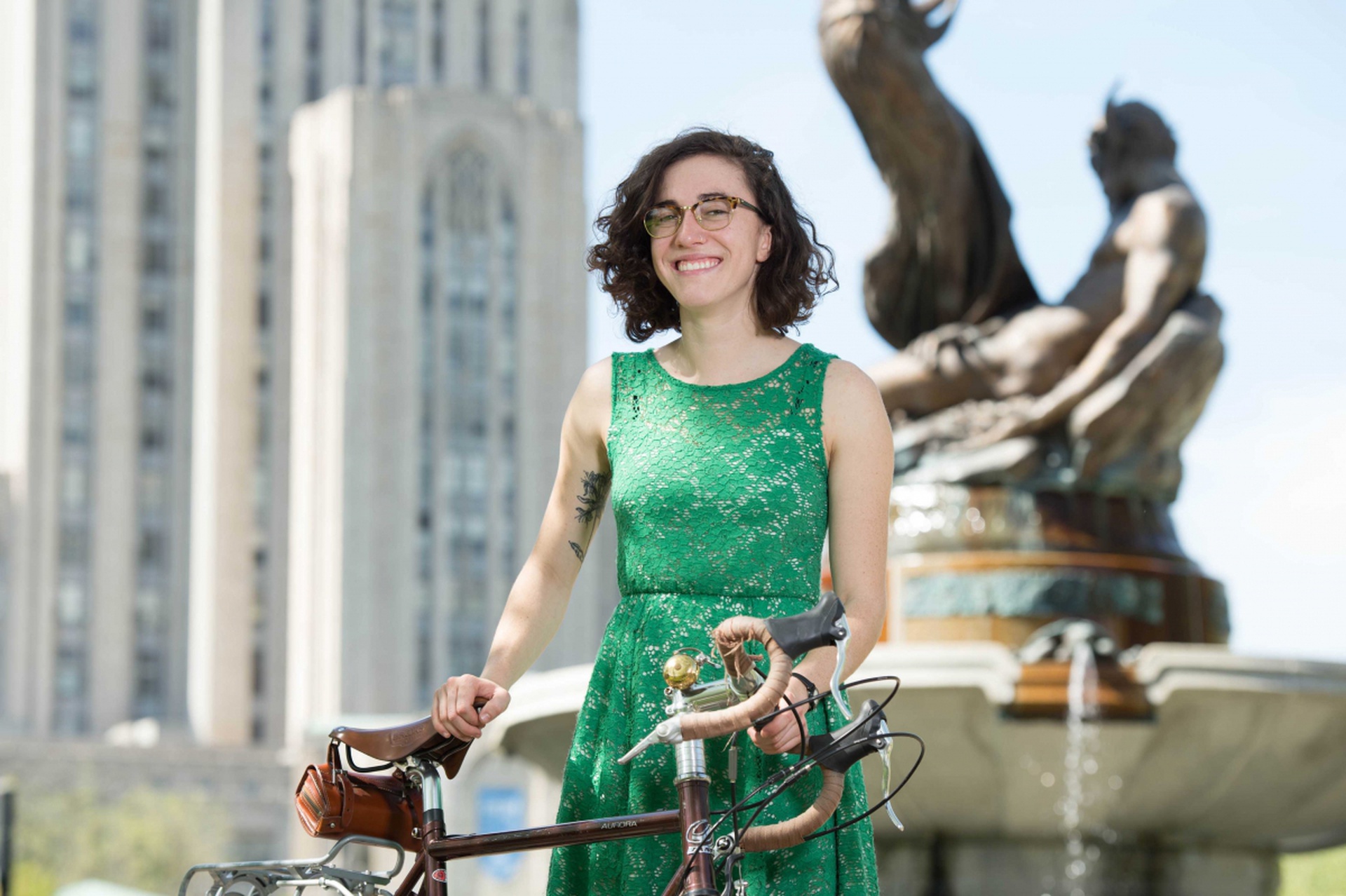 Driven by passions for water conservation and bicycling, Naomi Anderson has studied artificial glaciers in the Himalayas, helped to launch a campus bicycle cooperative and designed prize-winning solutions to mitigate abandoned mine drainage in the South Hills.

In addition to these highlights of her five years as an undergraduate in the Swanson School of Engineering, Anderson has coordinated sustainability projects on and around campus and pedaled with friends to Washington, D.C., on the Great Allegheny Passage trail — twice.

Anderson, who graduated on April 30, is one of the first two students to receive the Department of Civil and Environmental Engineering’s new bachelor of science degree in environmental engineering.

It’s a degree she wants to use here in Pittsburgh. A graduate of Pittsburgh Allderdice High School, she grew up in the city’s Squirrel Hill neighborhood. Her parents — Stewart Anderson, a faculty member in Pitt’s Graduate School of Public Health, and Deb Anderson, a business analyst at Grant Street Group — recognized early on her affinity for hands-on problem solving.

hey nudged, gently. “‘You have an engineering brain,’ they’d say. They would always come to me to fix things,” Anderson recalls.

When she arrived at Pitt, her preference for hands-on solutions made her choice of an engineering discipline easy: “It was civil or nothing,” she says.

But her path there wasn’t all smooth. A required course in concrete structures had Anderson in an unhappy spot. “I was thinking, ‘I can’t do this major anymore,’” she says, admitting she considered leaving engineering.

Anderson’s adviser, Leonard Casson, encouraged her instead to consider switching to the brand new environmental engineering major, which she did early in her final school year.

“Everything came together at the right time,” Casson says.

Anderson is exactly the sort of student the department had in mind when it created the new major, says Casson, an associate professor and the civil and environmental engineering department’s academic coordinator.

“With her intellect, she’s capable of doing anything,” he says of Anderson.

Summer experiences with a Student Conservation Association trail crew that worked to correct water drainage on forest trails in Vermont sent her along the path to environmental engineering.

“It was cool to build something I could immediately see, helping nature,” she says.

Her interest in water resources led her to the topic of artificial glaciers, and a resulting freshman research paper on the subject got the attention of a University of Massachusetts Amherst researcher who invited Anderson and her coauthor, fellow Pitt engineering student Taylor Shippling, to join her in the mountains of northern India to research the structures up close.

Summers there are short, so farmers need melt water from glaciers to arrive at just the right time in the planting season if their crops are to succeed. As the glaciers recede, water takes longer to flow from higher on the mountain.

To remedy the problem, engineers there have built structures to trap the melting water at lower altitudes, where it freezes in an ice dam and later melts at the expected time.

“It was sweet to go to India,” says Anderson, who blogged with Shippling during their time in the province of Ladakh.

“It was interesting learning about the technology — and to do so in a way that’s not like westerners traveling abroad to fix problems in the third world, but rather to learn,” Anderson says, not only about hydrology, but also from the local experts and their solutions.

Elsewhere beyond the classroom, as president of Pitt’s chapter of Engineers for a Sustainable World, Anderson coordinated projects to winterize students’ homes; to test the potential of wind belts, which are flapping straps that can generate power; and to create a rain garden in conjunction with an Oakland community group.

In 2015, she joined with friends to found the Pitt Bicycle Collective to support the campus cycling community. The collective’s proposal to create a bike repair space in the Posvar Hall underpass won the $10,000 top prizein the 2017 Sustainable Solutions competition on campus. The Bike Cave will launch before fall, she says.

Gena Kovalcik, codirector of the Mascaro Center for Sustainable Innovation (MCSI), grew to know Anderson as both passionate and prepared in her proposals when seeking funding for sustainability-related projects.

MCSI summer research funding contributed to the paper that led to Anderson’s journey to India. The center also provided some matching funds for ESW projects and the Bike Cave, Kovalcik says.

“Hers were more than just lofty ideas. Every time she’d come into my office, I knew she had a plan. It was always well thought out and thorough. She came in with a budget and a strategy to make it happen. I’m so excited to see what she does next,” Kovalcik says.

In a few weeks, Anderson and her mom will embark on a road trip to her next destination: Colorado, where she will spend four months as part of a Southwest Conservation Corps trail maintenance crew in the Four Corners region.

When she returns to Pittsburgh in October, she plans to settle in Lawrenceville and seek a job involving water resources.

“I want to be here. I think Pittsburgh needs people who care,” she says.

Of Bicycles and Glaciers