vorp_photo-594353.jpg
Abdominal aortic aneurysm
PITTSBURGH (October 1, 2015) … Abdominal aortic aneurysm (AAA), caused by the loss of elastin, a critical protein for blood vessel function, is responsible for approximately 10,000 American deaths every year. Through a grant from the National Institutes of Health, vascular bioengineering researchers at the University of Pittsburgh's Swanson School of Engineering are proposing a new strategy for delivering therapeutic cells to the diseased cells into order to restore elastin levels and regenerate the aorta.

Funded through the NIH's competitive Exploratory/Developmental Research Grant Award (R21) program, the research is being led by David A. Vorp,Associate Dean for Research at the Swanson School and the William Kepler Whiteford Professor of Bioengineering. The proposal, "Outside-In Regenerative Therapy for Abdominal Aortic Aneurysm," will receive $439,220 in direct and indirect funding through April 2017, and is a collaborative effort with Dr. John Curci, a vascular surgeon at Vanderbilt University. 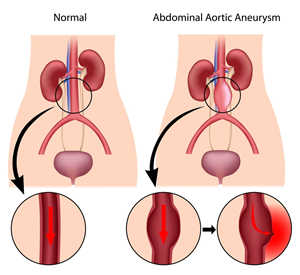 "Elastin is a highly elastic protein that allows soft tissues in our body - including blood vessels - to stretch and contract, but it is susceptible to the effects of aging, high blood pressure, high cholesterol, and smoking," Dr. Vorp explained. "Therefore, abdominal aortic aneurysms greatly impact the elderly, especially men, and, if left untreated, can ultimately result in structural failure or rupture of the aortic wall and, many times, death."

According to Dr. Vorp, the research will focus on development and delivery of mesenchymal stem cells to the outside of the aneurysm and will be tested in an established rodent model of the disease. Following treatment, the researchers will study whether the stem cells slow, halt or even reverse the structural degeneration of the AAA. The results could eventually lead to an effective treatment for humans using a patient's own stem cells.

"Few diseases present greater potential for regenerative cellular therapy than AAA, and the possibility of reconstitution and strengthening of the aorta is very exciting," Dr. Vorp said. "By delivering stem cells to restore elastin, we can effectively treat a life-threatening disease without complex invasive surgery."

The research in Dr. Vorp's lab focuses on the biomechanics, "mechanopathobiology," regenerative medicine, and tissue engineering of tubular tissues and organs, predominantly the vasculature. He is currently studying the biomechanical progression of aortic aneurysms by modeling the mechanical forces that act on the degenerating vessel wall, and is also designing a small diameter tissue engineered vascular graft to treat cardiovascular diseases.

Dr. Vorp has published more than 105 peer-reviewed research manuscripts and has been awarded over $7 million in research funding from the National Institutes of Health, American Heart Association, Whitaker Foundation, Pittsburgh Foundation, and other sources. He has several patents in the field of vascular bioengineering and is a co-founder of the start-up Neograft Technologies, Inc., a company that applies technology developed in Dr. Vorp's laboratory relating to biodegradable support for arterial vein grafts.

Dr. Vorp is an elected Fellow of the Biomedical Engineering Society (BMES), American Institute for Medical and Biological Engineering, and the American Society of Mechanical Engineers. He has held leadership positions in BMES (Board of Directors and Secretary of the Society), ASME (Chair of the Bioengineering Division's Executive Committee ), and is currently the President of the International Society for Applied Cardiovascular Biology. Dr. Vorp is also a member of several other prestigious organizations, such as the American Heart Association and the North American Vascular Biology Organization. His most recent honors include the 2013 Carnegie Science Award in the category of Life Sciences, and being elected to the 50-member World Council of Biomechanics for 12 years (2014-2026).