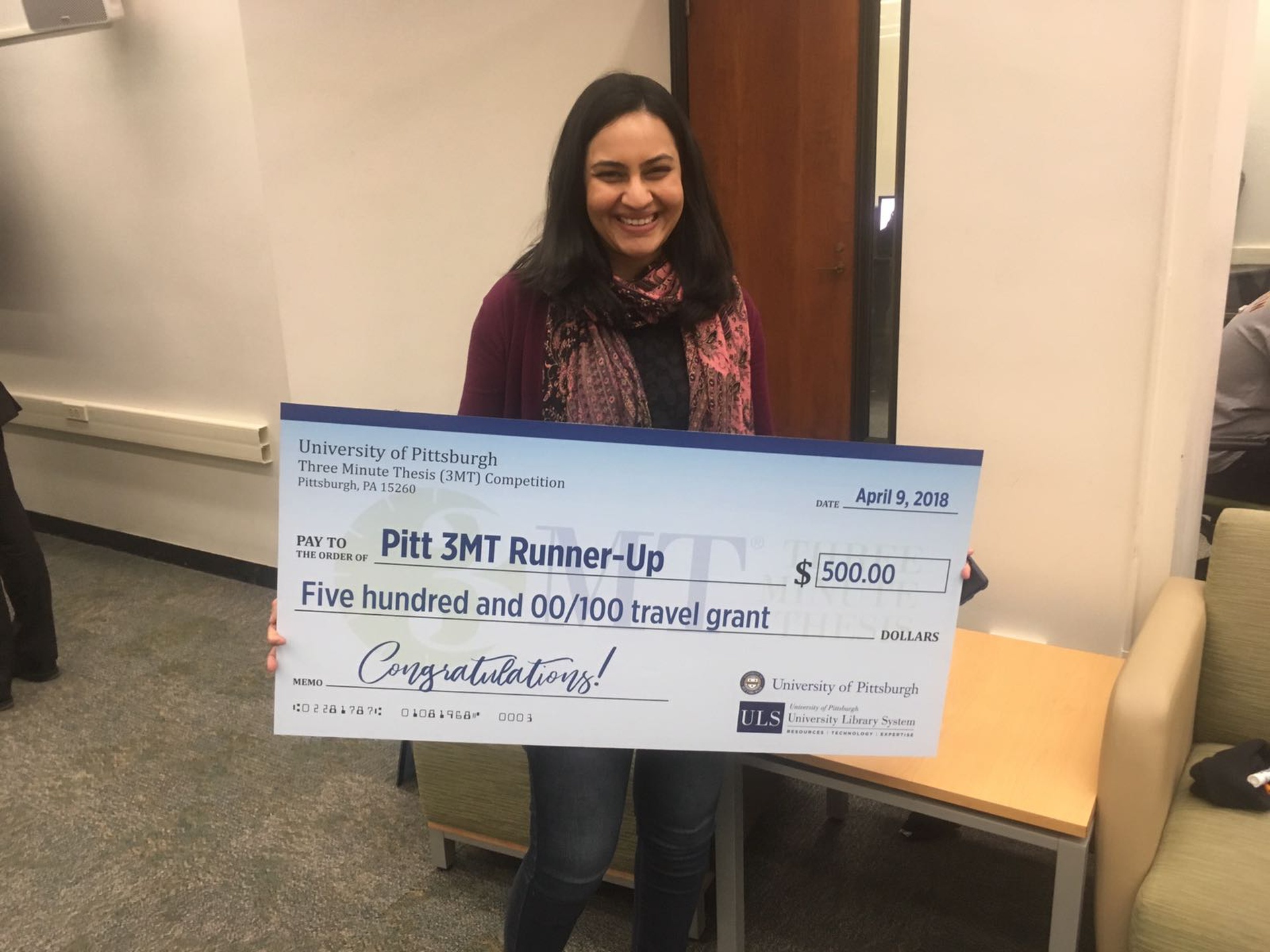 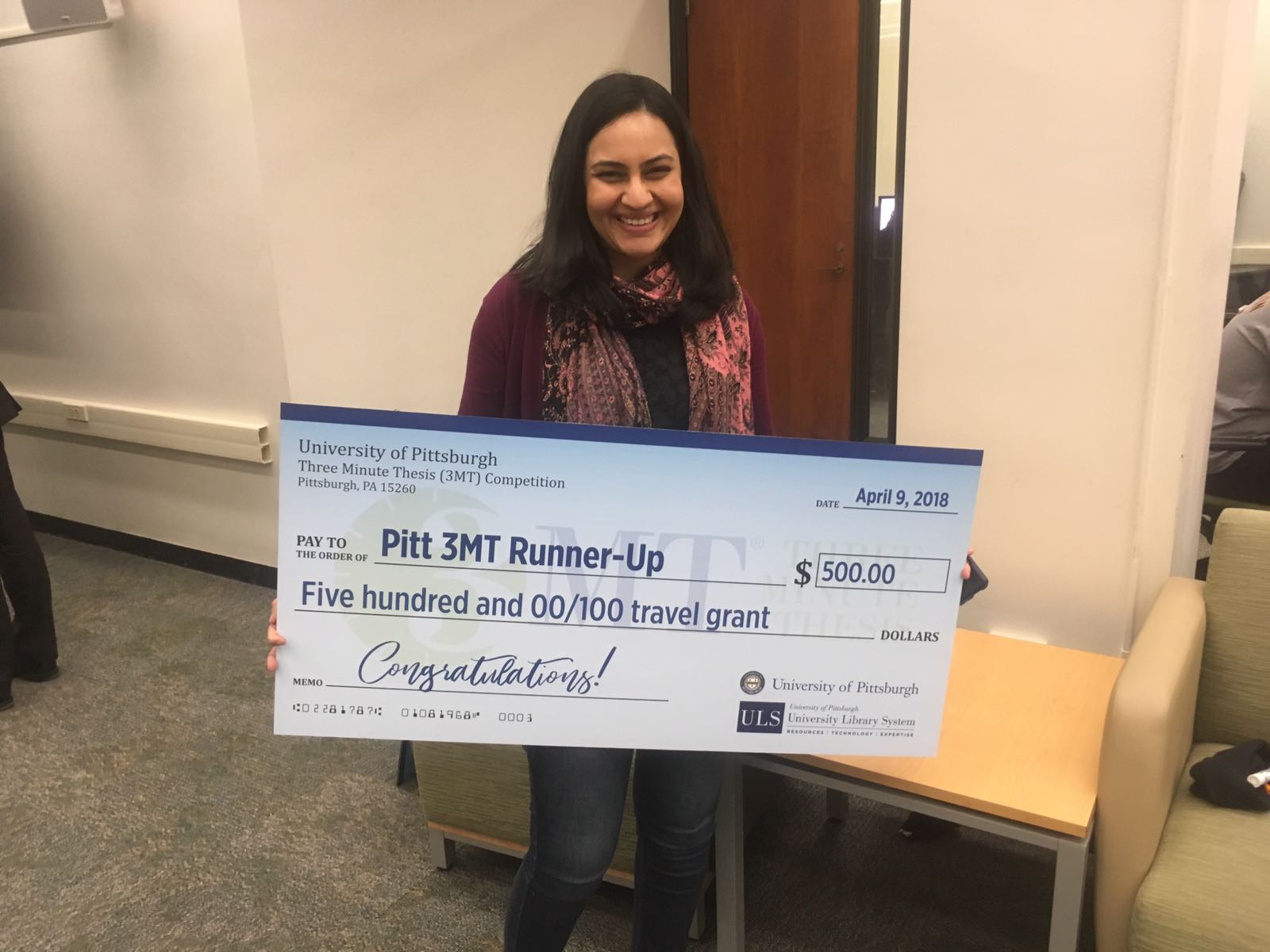 Nemi Vora at the 3MT competition

PITTSBURGH (April 30, 2018) … Developing a PhD thesis is a time-consuming process that involves committees, defenses, rewrites, and dissertations. But one University of Pittsburgh student was able to distill hers into a three-minute pitch – and was awarded for her presentation. Nemi Vora, a graduate student in the Swanson School of Engineering’s Department of Civil and Environmental Engineering (CEE), was one of two runner-up winners at the University of Pittsburgh’s Three Minute Thesis (3MT) Competition earlier this month.

Between 2012 and 2016, California faced one of its most severe droughts. Farmers risked losing their crops unless they tapped into the only other water source: groundwater. However, pumping water out of the ground requires electricity, and power plants require water for cooling. It didn’t take long before the largest electricity supply company in Southern California had to shut down two of its nuclear reactors. The drought set into motion a chain reaction threatening the region’s energy, water, and food.

“We know these resources are connected. Stress in one may affect the other two, so we need to manage them together,” says Vora. “Currently, our policies are not designed to look at the whole picture. This is where my work comes in.”

Vora studies how the same algorithms that power social media can be applied to government survey data about food, water, energy, and other essential resources. She is preparing her thesis titled “A systems-level framework for understanding sustainability and resilience of the U.S. Food-Energy-Water Nexus” under the advisory of CEE Associate Professor Vikas Khanna. Last year, the American Chemical Society journal ACS Sustainable Chemistry & Engineering published a paper (DOI: 10.1021/acssuschemeng.6b02122) based on Vora’s research, which was highlighted on the issue’s cover page.

Image: A visualization of energy embodied in irrigation from U.S. domestic food transfers. Embodied energy accounts for the total amount of energy consumed by a process. The network represents 1719 interstate transfers amounting to 274 billion megajoules of embodied energy, or roughly the amount of energy in 45 million barrels of oil.
Credit: Swanson School of Engineering/Nemi Vora

“We trade a lot of food in the United States, and the result is a chaotic network,” Vora explains. “To make sense out of it I use social network analysis, which is the same math used by social networks such as Facebook and Twitter. We find some interesting insights that would be much harder to piece together with traditional strategies.”

For example, Vora’s analysis revealed that Texas imports more grains than any other state. Although a complete statistical analysis would be necessary to pinpoint why Texas imports so many grains, the Lone Star State most likely uses them for raising cattle, food processing, or exporting from its ports. The bulk of the grain imports into Texas are from neighboring states like Oklahoma and Kansas because transportation costs are low. However, all states in the Midwest rely heavily on the same groundwater source called the Ogallala/High Plains Aquifer.

Roughly the size of Lake Huron, the aquifer supplies 30 percent of all water used to irrigate U.S. agriculture. In some areas, like Nebraska, the water supply replenishes itself faster than it’s pumped, but most of the water is being pumped out or “mined” faster than the natural hydrology can replenish itself. At the current rate, it will eventually run dry.

Texas could relax its burden on local groundwater by importing water from the eastern U.S., where it’s more abundant. Although this may seem like a simple solution, eastern states rely on high-polluting pumping fuels to extract groundwater, and importing food and water would require building costly conveyance systems. Vora’s research shows how a singular focus such as “pump more ground water when water supplies are low” or “import water from another region” can have ripple effects beyond state borders.

“Any increase in sourcing resources from other regions or agricultural output without a change in the current technology would end up increasing pollution,” she says. “Our reliance on trade can be a good negotiation point for convincing the states to work together on resource management and distribution decisions that will be the most beneficial for everyone.”

Vora also points out that some states, such as Kansas, are committing to changes that will help preserve the Ogallala/High Plains Aquifer for future generations. Her research quantifies relationships between energy, water, and food so people can avoid crises downstream by understanding the interconnectivity of these vast, complex networks of resources.