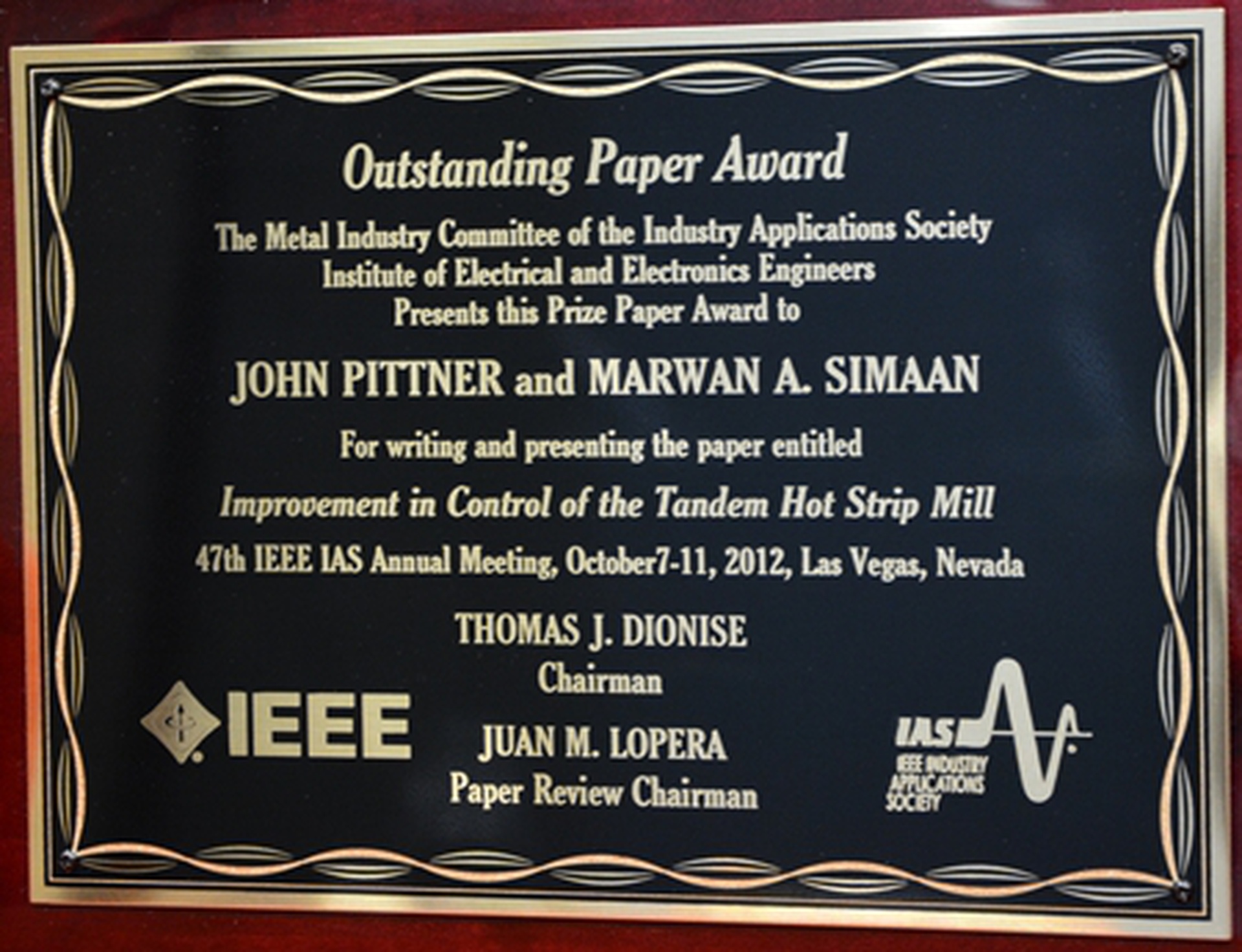 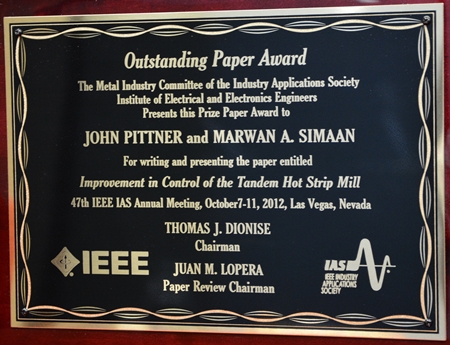 PITTSBURGH (February 10, 2015) … Two University of Pittsburgh Swanson School of Engineering faculty were recognized by the IEEE  Industry Application Society (IAS) for their research in the application of control systems for improving the performance of metal rolling mills. John Pittner, PhD, research faculty of electrical and computer engineering, with expertise in the control of metal rolling processes and more than 25 years' experience in this field, and Marwan A. Simaan, PhD, emeritus professor of electrical and computer engineering and currently distinguished professor of electrical engineering and computer science at the University of Central Florida, were recognized by IEEE/IAS/Metals with its Outstanding Paper Award for " Improvement in Control of the Tandem Hot Strip Mill ."

The award was presented at the IAS Annual Meeting in October 2014, for the paper which was presented at the Society's conference in 2012 and subsequently published in the Sept/Oct 2013 issue of the journal IEEE Transactions on Industry Applications. The award is presented for significant contributions in the electrical and control fields related to the advancement of the theory and practice in the making or treating of metals.

According to Pittner and Simaan, "Our previous work has shown that the use of the state-dependent Riccati equation (SDRE) technique as a basis for the development of a suitable controller for the tandem hot metal rolling process has resulted in significant improvements in performance. However the method of setting the controller parameters was left as a part of future efforts. In this paper we show that improvements in the implementation of the SDRE method provides a method of easily setting initial control parameters and then making automatic adjustments to the controller as the strip is processed through the mill. This eliminates the need for an on-line solution of the state dependent Riccati equation or the need for lookup tables to make controller settings. These improvements greatly simplify the design and implementation of the controller and also make the SDRE technique even more attractive in the control of many similar complex industrial processes."

Pittner and Simaan also noted that the application of newly emerging advanced methods, such as the SDRE technique, to the control of the tandem hot metal strip rolling process will lead to considerable savings in production costs by reducing yield losses and improving the quality of the final product. For example, it has recently been estimated that the domestic steel industry is experiencing a yield loss of about 1.5% in the product of hot rolling operations. Considering that domestic steel production is roughly estimated at nearly 100 million tons/year, with about one-half of this being manufactured on hot strip  mills, and with the price of hot band steel at about 650 USD per ton, the estimated loss is roughly about one-half billion USD per year.

Their improved method can reduce this loss and improve quality, especially evident in the case of possible modernization of existing mills. It is recognized, based on a recent best estimate, that of the 27 domestic tandem hot strip finishing mills, 25 mills have control systems that are more than 5 years old; of these 22 are more than 10 years old, and 20 are more than 15 years old.  Thus, the potential exists for controller updates to realize significant improvement in the yield and quality, and thus the profitability, of many of these installations.