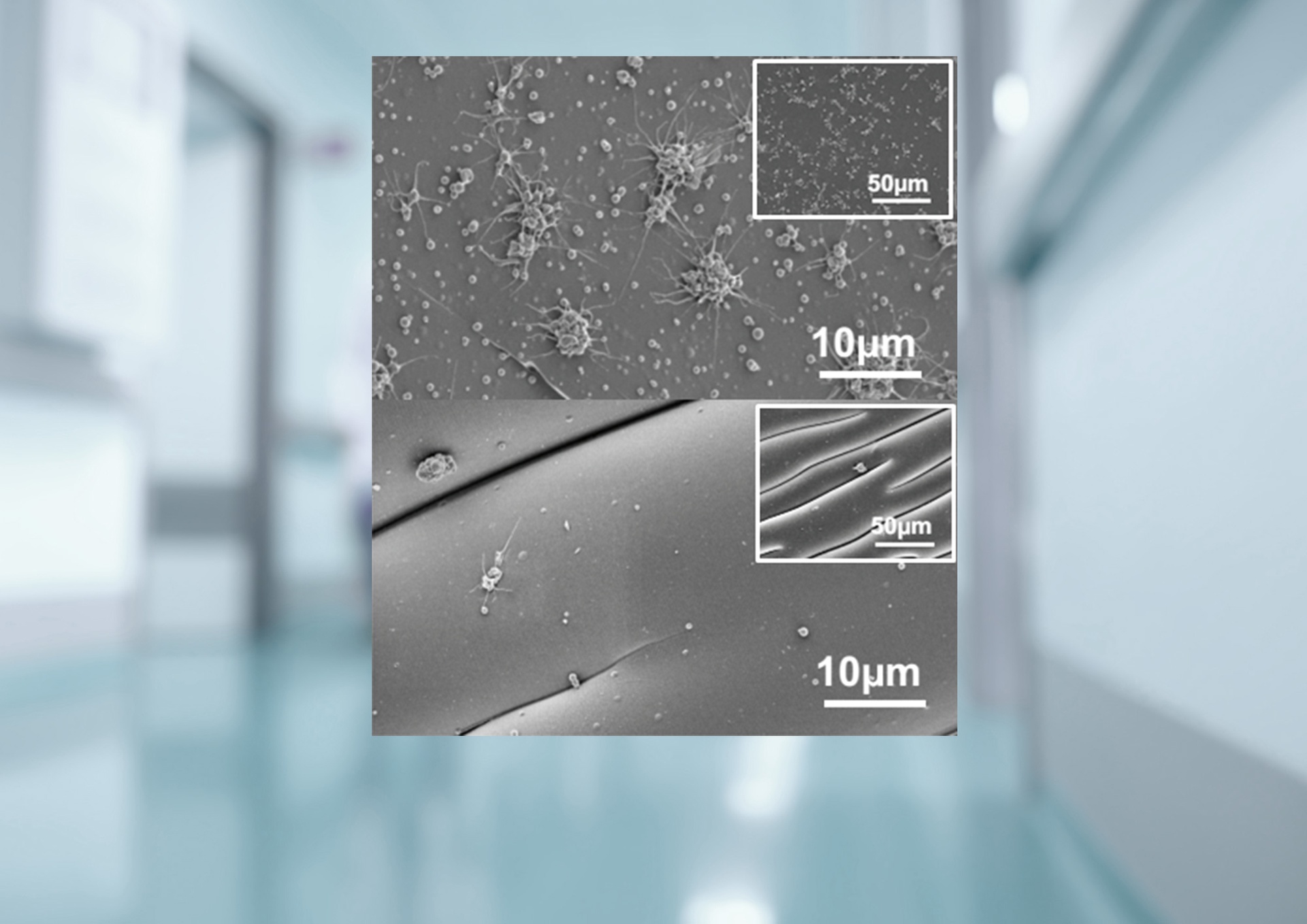 Top: A smooth and static surface after exposure to blood gets fouled with platelets. Bottom: A surface that wrinkles and flattens repeatedly while exposed to blood resists fouling. Insets show same surfaces at lower magnification.

PITTSBURGH (November 27, 2018) … During a coronary bypass procedure, surgeons redirect blood flow using an autologous bypass graft, most often derived from the patient’s own veins. However, in certain situations where the patient does not have a suitable vein, surgeons must rely on synthetic vascular grafts which, while life-saving, are more prone to clot formation that eventually obstructs the graft.

To improve the success rate of synthetic grafts, a research team led by the University of Pittsburgh are investigating whether the “active wrinkles” on the interior surface of arteries may help improve synthetic graft design and create a better alternative to autologous grafts for bypass surgery.

The research is being conducted by Sachin Velankar, associate professor of chemical engineering at the Swanson School of Engineering; Edith Tzeng, professor of surgery in the School of Medicine; and Luka Pocivavsek, a former resident in the Department of Surgery. Together with Pocivavsek, who is now a vascular surgery fellow at the University of Chicago, Velankar and Tzeng took inspiration from arteries to find a way to improve blood flow in synthetic grafts.

“The inner surface of natural arteries, known as the luminal surface, is heavily wrinkled,” said Velankar. “We wanted to explore the effects of this wrinkling to see if the transition from a smooth to wrinkled state will prevent clot formation. We call this dynamic topography.”

Pocivavsek, Velankar, and Tzeng worked with a team of Swanson School of Engineering undergraduate students to create a model to test the idea that such surface “topographical” changes can play an anti-thrombotic role. They also enlisted the help of William Wagner, Director of Pitt’s McGowan Institute for Regenerative Medicine, whose lab has expertise on how to measure fouling - the accumulation of unwanted material on surfaces. The team discovered that surfaces that repeatedly transition between a smooth to wrinkled state resist platelet fouling, a finding that could lead to thrombosis-resistant bypass grafts.

Equipped with a strategy to improve the effectiveness of synthetic grafts, Velankar and Tzeng are eager to apply this research to clinical applications and received a $454,539 R56 award from the National Institutes of Health to fund clinical translation work.

“Our arteries expand and contract naturally, partially driven by normal fluctuations in blood pressure during the cardiac cycle,” said Tzeng. “Our hypothesis is that this drives the transition between smooth and wrinkled luminal surfaces in arteries, and this dynamic topography may be an important anti-thrombotic mechanism in arteries. Our goal is to use this novel concept of a purely mechanical approach to prevent vascular graft fouling by using the heartbeat as a driving mechanism.”

They are also interested in examining the biomechanics of the luminal wrinkling in actual arteries and recently received a three-year, $341,599 grant from the National Science Foundation to continue their study both in vivo and with animal specimens. Through a combination of simulation and experimentation, they hope to gain a better understanding of the functional role of luminal wrinkling.

“We know that arteries appear wrinkled in a microscope”, said Velankar. “But what are the underlying biomechanics? And what’s happening when the artery is not under a microscope, but still carrying blood in the living animal?”

Pocivavsek, Velankar, and Tzeng recently detailed their research findings in a Biomaterials article titled “Active wrinkles to drive self-cleaning: A strategy for anti-thrombotic surfaces for vascular grafts” (DOI: 10.1016/j.biomaterials.2018.11.005). It is the first practical application of the concept that they described earlier this year in the Nature Physics article titled “Topography-driven surface renewal” (DOI: 10.1038/s41567-018-0193-x).

“We hope that our novel strategy to reduce fouling will lead to the development of medical devices that will improve the treatment of injured or diseased arteries,” said Velankar.

Confident that their research may provide a positive outcome, the group created Aruga Technologies, a spin-off company from Pitt’s Innovation Institute. The company aims to develop synthetic vascular grafts that can be used for surgical procedures, such as a coronary artery bypass.