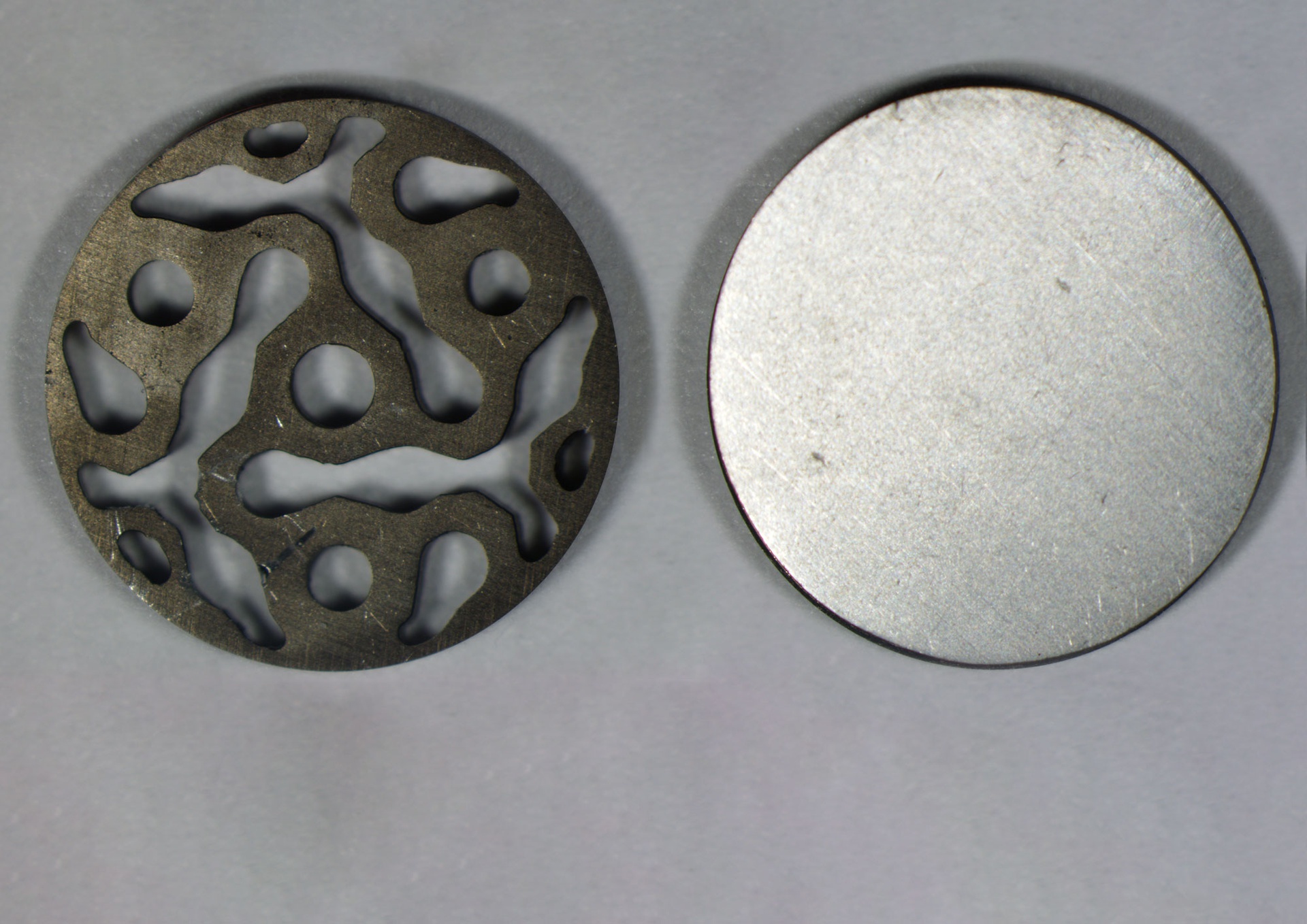 This image features examples of novel magnesium alloy device sample (left) made from the alloy cast and solidified on earth (right). These alloys will be sent to ISS for microgravity casting. Credit: Prashant N. Kumta.

Magnesium and magnesium alloys have the potential to become a revolutionary material for a variety of industries because of their lightweight structure and ability to quickly biodegrade in water or inside the human body. Researchers, however, are still struggling to process this very reactive metal to eliminate defects that accelerate corrosion.

Prashant N. Kumta, the Edward R. Weidlein Chair Professor of Bioengineering at the University of Pittsburgh, believes that a microgravity environment may positively affect the solidification mechanisms of these alloys. He received grant funding from theInternational Space Station (ISS) U.S. National Laboratory to examine microgravity’s influence on his lab’s novel patented magnesium alloys.

The team is partnering with Techschot, Inc., the commercial hardware facility partner that operates the high-temperature SUBSA furnace aboard the ISS National Lab. Once in the microgravity environment of the space station, the alloy composition will be melted in the SUBSA furnace, and then solidified for further analysis.

This is the first selected project in the new Biomedical Research Alliance - a multi-year collaboration between the ISS U.S. National Laboratory and the McGowan Institute for Regenerative Medicine to push the limits of biomedical research and development aboard the orbiting laboratory.

“Magnesium and magnesium alloys are extremely light, with a density similar to natural bone,” explained Kumta. “They are two-fold lighter than titanium alloys and five-fold lighter than stainless steel and cobalt-chrome alloys – all of which are materials typically used in today’s implants and frameworks. Thus, the development of these materials could open new International Space Station applications as a lightweight structural framework material.”

Because of their weight and earth abundance, the alloys may also prove to be beneficial for climate change and energy storage.

“Fixtures or accessories in the aerospace industry - such as seats and lighting - that are made from magnesium alloys will be lighter which will consequently reduce fuel consumption,” said Kumta. “These benefits will help reduce costs and decrease greenhouse gas emissions – an advantage that can be applied to the automotive industry which accounts for a large amount of emissions in the United States. The material could also be used as a rechargeable battery similar to lithium-ion batteries.”

The magnesium alloys developed by Kumta’s team may also serve as a cheaper and improved bioresorbable material for implanted medical devices. This type of material, which can be broken down and absorbed by the body, has a variety of applications in regenerative medicine and tissue engineering, such as implanted scaffolds that help guide the growth of new tissue.

“Despite expensive post-processing steps to minimize defects, magnesium alloys processed on earth react in a physiological fluid environment and form large amounts of hydrogen gas, resulting in gas pockets that must be aspirated by a syringe,” said Kumta. “We believe that processing the material in microgravity will considerably minimize or perhaps even eliminate melting and casting defects. As a result, the alloys will likely exhibit improved corrosion resistance, resulting in soluble hydrogen and salt products with better bioresorption response when implanted as scaffolds. Further, expensive post-processing will likely be eliminated, thereby reducing costs by almost 50 percent.”

Kumta, who holds secondary appointments in chemical and petroleum engineering, mechanical engineering and materials science, the McGowan Institute of Regenerative Medicine, and oral biology, will work with a team of researchers from his laboratory in the Swanson School of Engineering, including Bioengineering Research Assistant Professors Abhijit Roy, Moni Kanchan Datta, and Oleg Velikokhatnyi.

The research team hopes that this work will lead to the processing of better quality magnesium alloys, which will be free of many of the defects that form in terrestrially processed alloys, ultimately enabling improved functionality on Earth with significantly reduced processing steps and costs.

“This work offers a tremendous opportunity for advancing the science and technology of microgravity metal casting, widening the translational potential of the versatile magnesium-based systems for biomedical, energy, and aerospace applications,” said Kumta. “Magnesium has not yet been studied in space so this project gives us the chance to explore a new frontier in scalable manufacturing of high quality magnesium and magnesium alloys in space.”