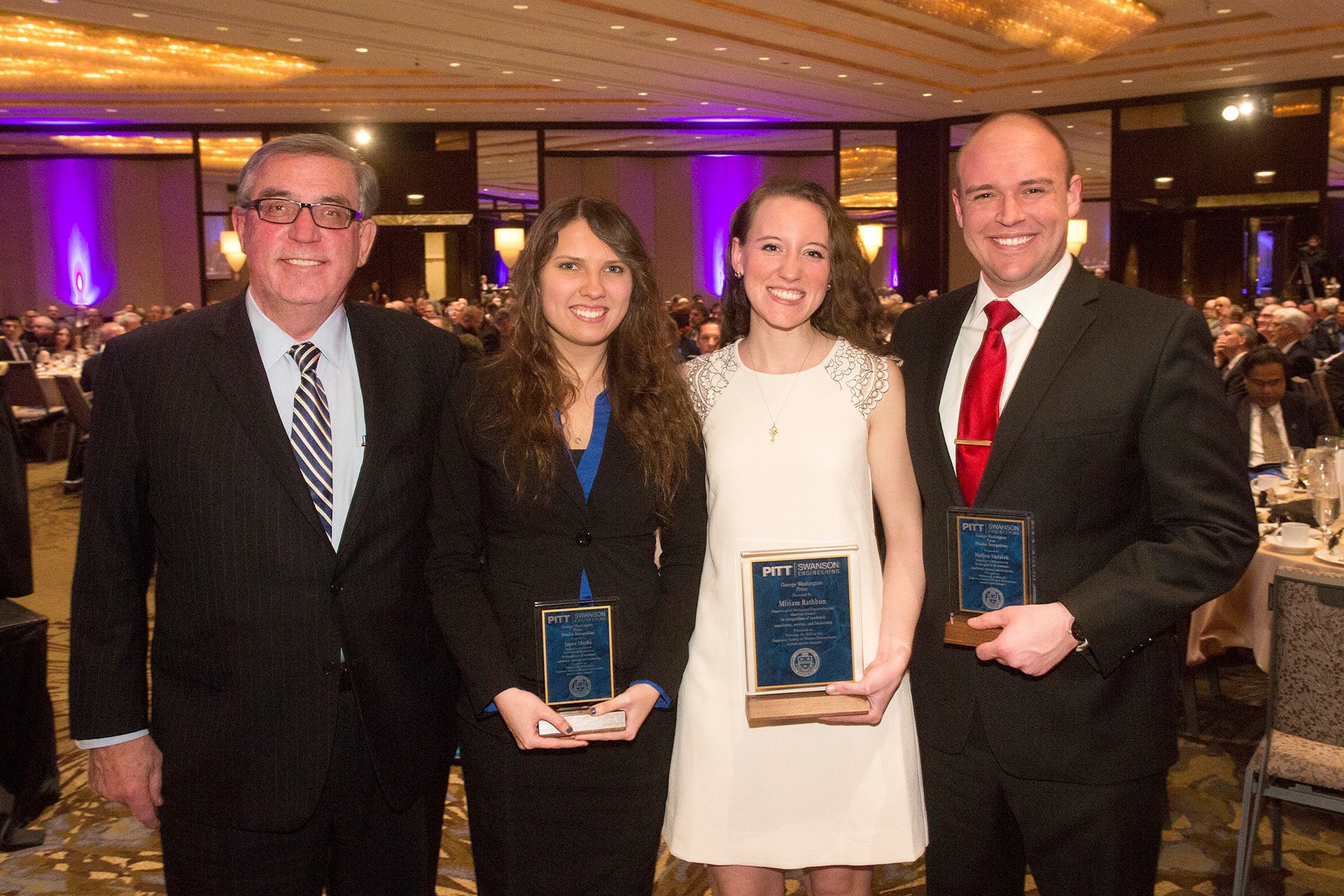 PITTSBURGH (February 15, 2016) … As part of the annual recognition of National Engineers Week, the Engineers’ Society of Western Pa. (ESWP) and the University of Pittsburgh Swanson School of Engineering have announced this year’s engineering award winners, which will be presented at the ESWP’s annual banquet on Wednesday, February 18.

Swanson School alumna N. Catherine Bazán-Arias, BSCE ’92, MSCE ’94, PhD ’99, P.E., F.ASCE, was selected as the ESWP 2015 Engineer of the Year. The award was created in 1998 to recognize individuals who have significant technical and professional accomplishments which contribute to the engineering profession. Ms. Bazán-Arias, a senior engineer at DiGioia, Gray & Associates, LLC in Monroeville, Pa. specializes in soil-structure interaction analysis and design with an emphasis on dams and retaining structures; structural analysis and design, and management of coal-combustion products.

The Swanson School named Miriam Rathbun, an undergraduate student in mechanical engineering and materials science, as the recipient of its George Washington Prize, which recognizes Pitt seniors who display outstanding leadership, scholarship and performance as determined by a committee of eight professional engineers and Swanson School faculty. The George Washington Prize was named after the first President of the United States and First Engineer, to reinforce the importance of engineering and technology in society, and to sustain and enhance the visibility of the engineering profession.

“We’re very proud that ESWP selected Cathy, our triple-alumna, as this year’s Engineer of the Year, who has established herself as an accomplished engineer in Pittsburgh and around the world,” said Gerald D. Holder, U.S. Steel Dean of Engineering at Pitt. “The Swanson School is also pleased to recognize Miriam as our outstanding senior, along with her fellow nominees.

“On a collegial note, I would like to congratulate Jim Garrett, Dean of Carnegie Mellon University's College of Engineering, on winning the Metcalf Award. Jim and his faculty continue to be great partners with the Swanson School, and this honor is well deserved.” Dean Holder was the 2008 recipient of the Metcalf Award.

More about Catherine Bazán-Arias
Ms. Bazán-Arias joined DiGioia, Gray & Associates, LLC in 2008 and has been involved with the American Society of Civil Engineers (ASCE) since 1989. Her leadership positions at the ASCE local, regional and national level include: Past President of the Geo-Institute Pittsburgh Chapter; Past At-Large Director of the National Board of Direction; and, presently, serving as the President of the Pittsburgh Section. Through Engineers without Borders (EWB), she mentored a team in Makili, Mali (West Africa) in 2009 that constructed a fish pond with locally available resources and skills.

Ms. Bazán-Arias is a Past Columnist for Civil Connection, Past Lead Editor for the ASCE’s Geo-Strata Magazine, the ASCE Pittsburgh Section’s 2002 Young Civil Engineer Awardee, and the ASCE’s 2003 Zone I Diversity Champion Awardee. She obtained her BSCE, MSCE and PhD in civil engineering from the University of Pittsburgh, and afterward lectured a Advanced Mechanics of Materials graduate course at Pitt in 2001, which led to a long-time lecture of undergraduate-level Structural Analysis at Carnegie Mellon University from 2002-2011.