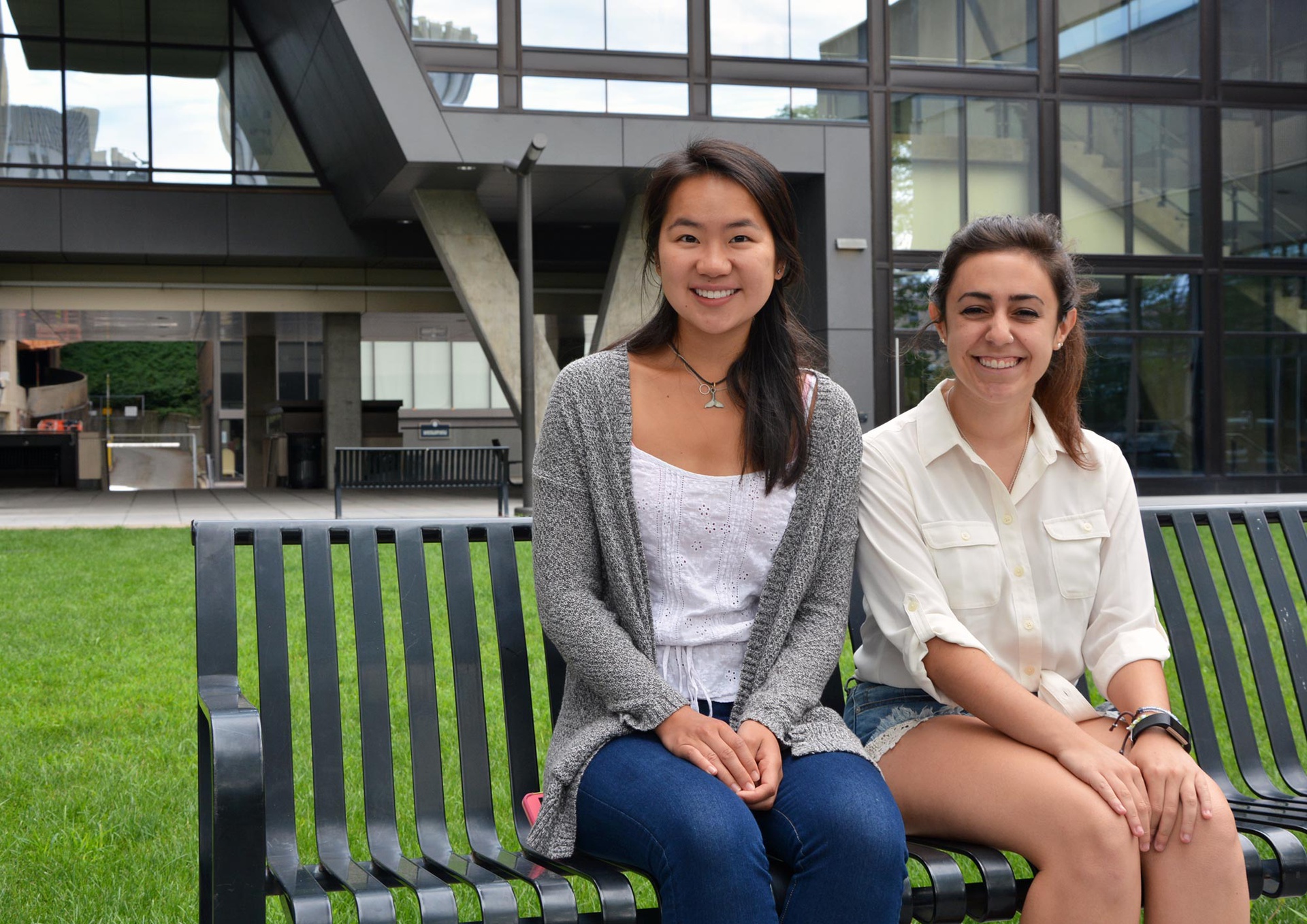 PITTSBURGH (August 7, 2017) … At the 14th Annual Undergraduate Research Symposium (URP) hosted by the Swanson School’s Mascaro Center for Sustainable Innovation, students presented the results of their multidisciplinary approaches to sustainable engineering. Research for the 17 student projects took place during the 12-week URP summer program. The students worked independently on their projects but received guidance from University of Pittsburgh faculty mentors.

Angela Leo and Kendra LaVallee, both majoring in chemical engineering, received first and second place, respectively. As a Covestro Scholar, Leo was supported by the high-tech polymer company Covestro; and as a Mascaro Scholar, LaVallee was supported by Civil Engineering alumnus, John C. Mascaro.

Leo’s project titled “Unlocking Energy Efficient Water Oxidation for Ozone Disinfectants” examined the electrochemical production of ozone through extreme water oxidation and its overpotential – a measurement of a reaction’s optimal value compared to what is experimentally observed. Using advanced computational methods, Leo was able to model and observe a reduction in the overpotential, indicating progression towards efficient ozone catalysis. Ozone has the potential to offer a more sustainable alternative to water sterilization when compared to traditional methods such as chlorine or chloramine.

LaVallee’s project titled “Fueling a Growing World: Nanoparticle Catalyzed Synthesis of Ethylene” focused on developing a novel synthesis method for ethylene production from ethane. Ethylene, an important commodity chemical that serves as a precursor for most plastics, is currently manufactured in an energy-intensive process that releases harmful air pollutants to the atmosphere. LaVallee’s research explored a process called oxidative dehydrogenation, which permits gentler reaction conditions.

About Angela Leo
Leo will graduate in fall 2019 with a bachelor’s degree in chemical engineering. Since this past January, she has been an undergraduate researcher in the research group of John Keith, Assistant Professor and the Inaugural Richard King Mellon Faculty Fellow in Energy. In the group, she has learned how to utilize Python and the software CP2K to investigate chemistry computationally.

Leo is currently a member of the American Institute of Chemical Engineers, Society of Women Engineers, and the University of Pittsburgh Varsity Marching Band, in which she plays the bass (tuba). She is also a former member of the photography club.

About Kendra LaVallee
LaVallee will graduate in the fall 2017 and will receive her bachelor’s degree in chemical engineering. She is pursuing a certificate in Supply Chain Management in the joint program between the Swanson School and the University of Pittsburgh College of Business Administration. After completing a yearlong co-op in the technical operations department at Johnson & Johnson, LaVallee received the National Co-op of the Year Award from the American Society of Engineering Education at the Conference for Industry and Education Collaboration.

This summer, she worked under the guidance of graduate student Yahui Yang in the catalytic reaction engineering laboratory of Goetz Veser, professor of chemical and petroleum engineering.

An active participant in PittServes, LaVallee traveled to Ecuador during her spring break to volunteer to help build a sustainable marketplace. She is in the Honors Chemical Engineering Society, Omega Chi Epsilon, and she is also the Women’s Engineering Conference Publicity Chair for the Society of Women Engineers.