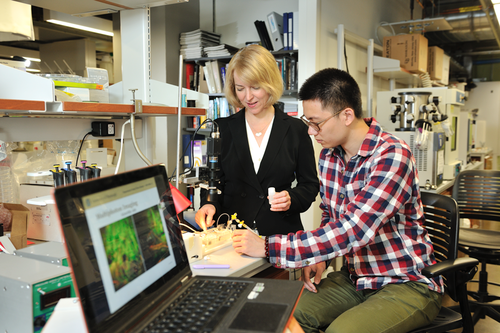 Recognizing her contributions and service in support of teaching and research, as well as her development of a holistic mentorship program for new faculty, the University of Pittsburgh promoted Anne Robertson to Distinguished Service Professor, the highest honor that the University can accord a member of the professorate.

Robertson, a William Kepler Whiteford Professor of Engineering, holds a primary appointment in the Swanson School of Engineering’s Department of Mechanical Engineering and Materials Science (MEMS) with a secondary in Bioengineering, is nationally recognized for her research in hemodynamics, cerebral vascular disease, and the formation and treatment of intracranial aneurysms.

“I cannot be more excited for Anne and her promotion to the highest faculty rank at Pitt, joining an elite rank of individuals in our department and school,” said Brian Gleeson, the Harry S. Tack Chair Professor and MEMS Department Chair, who nominated Robertson for the position.

Robertson is also founding director of the Swanson School’s Center for Faculty Excellence, which helps newly recruited assistant professors navigate the teaching, research, scholarship, and support systems of the university environment. Young professors are mentored by a committee of interdisciplinary senior faculty from throughout Pitt as well as from Carnegie Mellon University. The Center aims to shepherd new faculty through their new tenure, improve retention and encourage self-growth.

“I am deeply appreciative of the opportunities and support I have had to pursue initiatives in research and service at Pitt, while maintaining my engagement in classroom teaching,” she said. “It has been a privilege and inspiration to work with our outstanding junior faculty at Pitt through the Center for Faculty Excellence and gratifying to see the selfless commitment of my colleagues to mentoring these faculty across department, school and even university lines.

“The University of Pittsburgh has been by academic home since I completed my postdoctoral training and so it is particularly meaningful to me to be promoted to the level of Distinguished Professor.”

She leads a research team that investigates cerebral aneurysms, which are pathological outcroppings of brain arteries that can lead to fatal brain hemorrhages. She is the recipient of three coveted National Institutes of Health grants, two R01 and one R21 grant, to study the link between hemodynamics and wall structure in cerebral aneurysms. The team’s long-term objectives are to establish new pharmacological-based treatment methods for cerebral aneurysms and improve clinical treatments that function by altering flow in the aneurysm dome. She was also co-PI on a third R21 developing tissue engineering blood vessels.

In 2007, Dr. Robertson was awarded the Beitle-Veltri Memorial Outstanding Teaching Award, given annually to one faculty member in the Swanson School of Engineering at the University of Pittsburgh as well as the Robert O. Agbede Faculty Award for Diversity, in recognition of significant contributions to enhancing and supporting diversity in the School of Engineering. She is also a member of the faculty in the Department of Bioengineering and a research professor at the McGowan Institute for Regenerative Medicine.