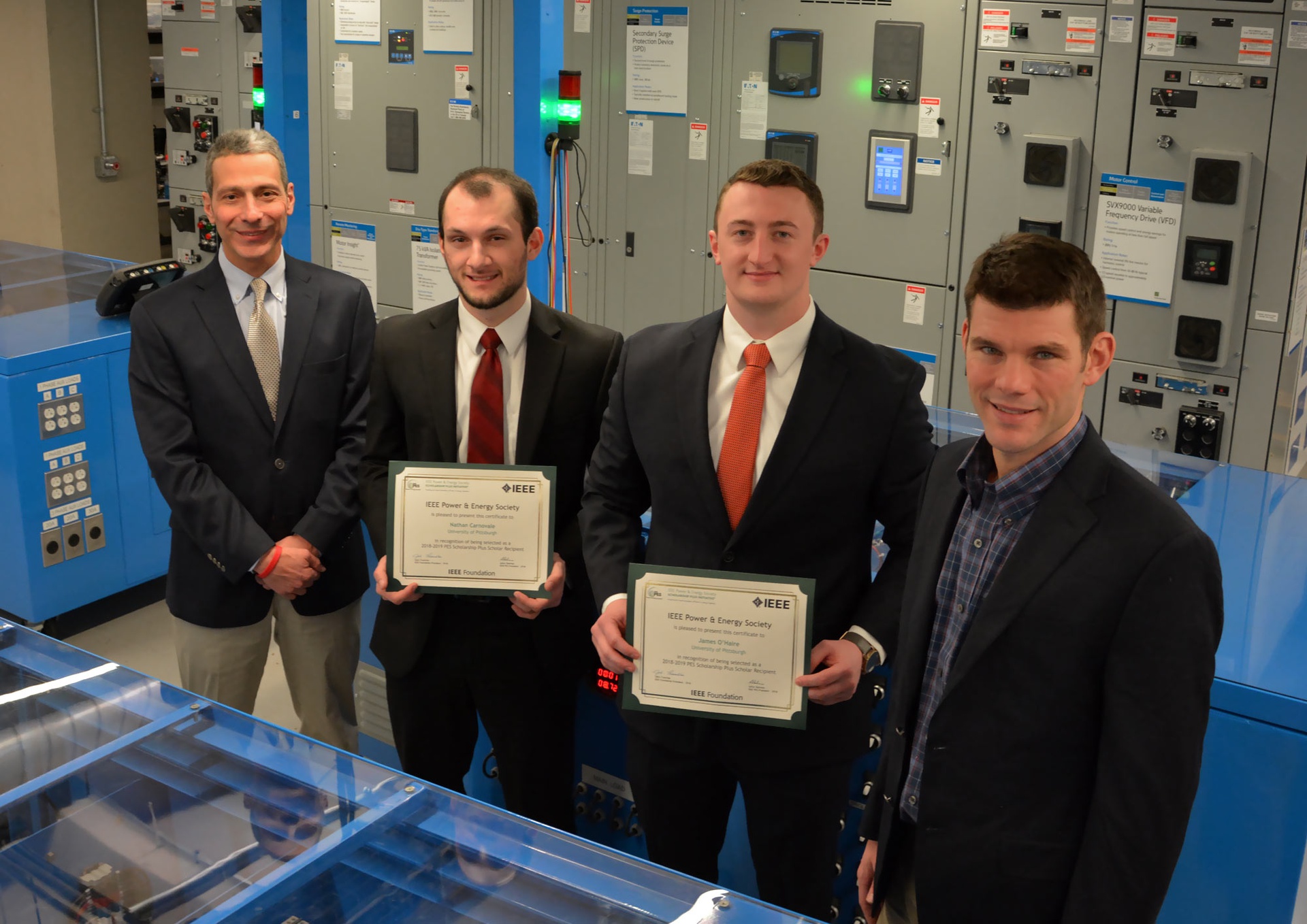 PITTSBURGH (February 4, 2019) … The Institute of Electrical and Electronics Engineers (IEEE)Power and Energy Society (PES) selected University of Pittsburgh seniors Nathan Carnovale and Shamus (James) O’Haire as recipients of the 2018-19 IEEE PES Scholarship Plus Award. Both are majoring in electrical and computer engineering at Pitt’s Swanson School of Engineering. This is Mr. Carnovale’s second IEEE PES Scholarship in as many years.

“Being named an IEEE PES Scholar is well-respected in the field of power engineering, and both Nate and Shamus are outstanding ambassadors for our program,” said Robert Kerestes, assistant professor of electrical and computer engineering at Pitt. “We are incredibly proud of their accomplishments and I think they have great potential in their future careers.”

The IEEE PES Scholarship Plus Initiative awarded scholarships to 174 electrical engineering students from 96 universities across the U.S., Canada, and Puerto Rico. Applicants for the scholarships were evaluated based on high achievement with a strong GPA, distinctive extracurricular commitments, and dedication to the power and energy field.

Over the past seven years, the Scholarship Plus Initiative has awarded more than $3.5 million in scholarships to students interested in pursuing a career in the power and energy industry. Carnovale and O’Haire are the Swanson School’s 11th and 12th PES recipients since the scholarship’s inception in 2011 and continue the School’s seven-year streak of at least one awardee each year. Also, according to IEEE, Pitt is one of only 16 universities that have had at least one recipient every year since 2011.

About Nathan Carnovale
Nate Carnovale is scheduled to graduate from the University of Pittsburgh in December 2019 with a bachelor of science in electrical engineering and a concentration in electric power, and plans to pursue an M.S. degree in electric power engineering at Pitt starting in spring 2020. During his undergraduate career, he interned with Eaton for two summers, working at Eaton’s Power Systems Experience Center and in Eaton’s Power Systems Automation services group in Warrendale, PA. There he gained experience in power systems metering and monitoring, as well as experience installing, wiring, and programming Eaton demos at the Experience Center. He will be working in Eaton’s Power Systems Controls group this summer working with microgrids. For four semesters at Pitt, Carnovale has been a teaching assistant for the Art of Making, an introductory engineering course to hands-on systems design. He is currently working to develop an adapted physical education learning tool for students with physical and mental challenges at the Western Pennsylvania School for Blind Children in Pittsburgh, a project he started during his time as a student in the Art of Making course.

About Shamus (James) O’Haire
Shamus O’Haire is scheduled to graduate in spring 2019 with a bachelor of science degree in electrical engineering with a concentration in power systems and a minor in computer science. During his career at Pitt, he has spent three summers interning at Exelon Corp., a Fortune 100 energy company that operates electric generation nationwide as well as electric distribution in the Northeastern US. He gained industry experience in system operations, transmission planning, and substations engineering during his time with the company, and hopes these experiences will be a springboard for his future career in the power and energy industry. O’Haire currently serves as the Chief Electronics Engineer for Pitt Aero Society of Automotive Engineers, and is a member of IEEE.