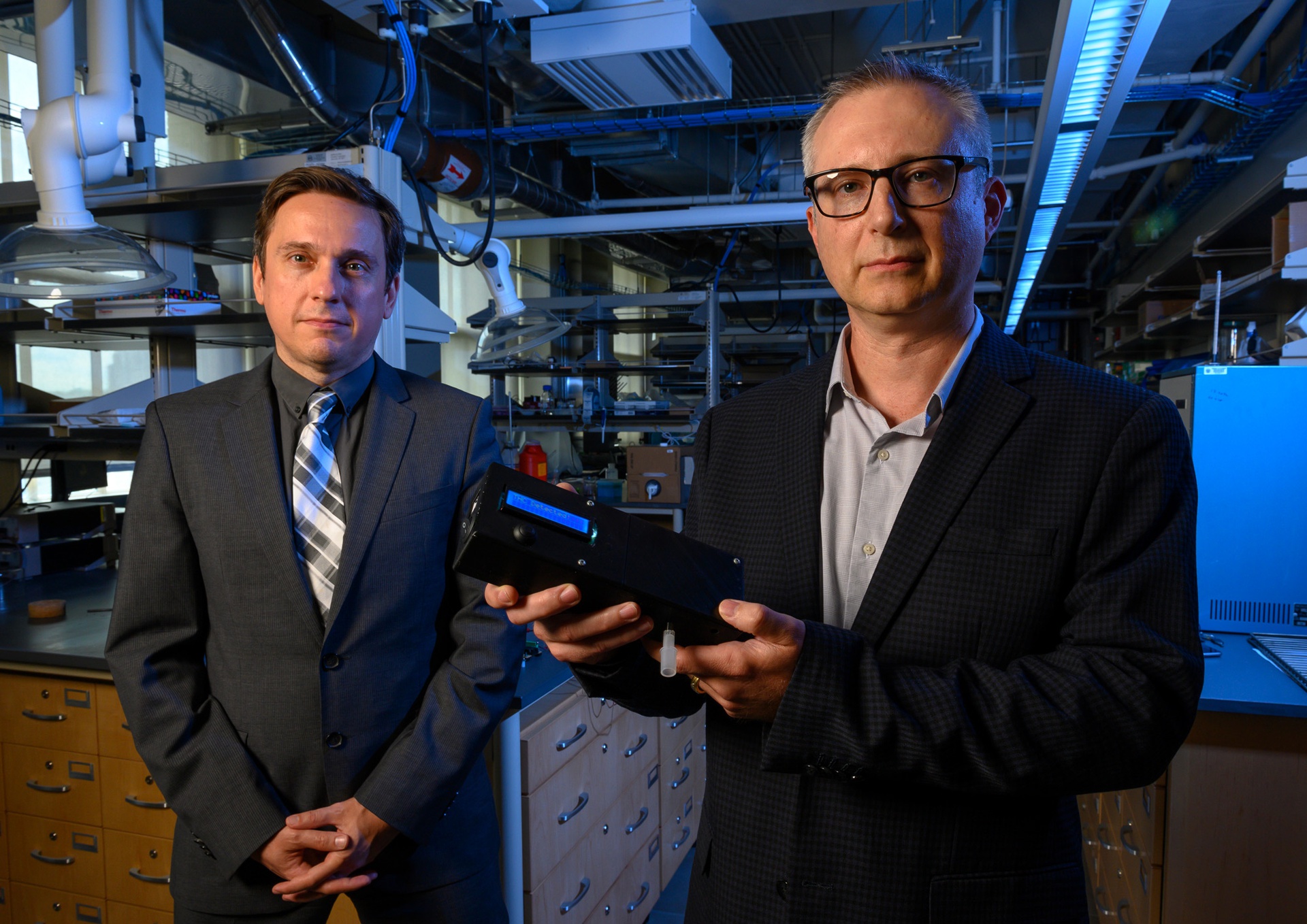 PITTSBURGH (Aug. 27, 2019) — As recreational marijuana legalization becomes more widespread throughout the U.S., so has concern about what that means for enforcing DUI laws. Unlike a breathalyzer used to detect alcohol, police do not have a device that can be used in the field to determine if a driver is under the influence of marijuana. New research from the University of Pittsburgh is poised to change that.

An interdisciplinary team from the Department of Chemistry and the Swanson School of Engineering has developed a breathalyzer device that can measure the amount of tetrahydrocannabinol (THC), the psychoactive compound in marijuana, in the user’s breath. Current drug testing methods rely on blood, urine or hair samples and therefore cannot be done in the field. They also only reveal that the user has recently inhaled the drug, not that they are currently under the influence.

The breathalyzer was developed using carbon nanotubes, tiny tubes of carbon 100,000 times smaller than a human hair. The THC molecule, along with other molecules in the breath, bind to the surface of the nanotubes and change their electrical properties. The speed at which the electrical currents recover then signals whether THC is present. Nanotechnology sensors can detect THC at levels comparable to or better than mass spectrometry, which is considered the gold standard for THC detection.

“The semiconductor carbon nanotubes that we are using weren’t available even a few years ago,” says Sean Hwang, lead author on the paper and a doctoral candidate in chemistry at Pitt. “We used machine learning to ‘teach’ the breathalyzer to recognize the presence of THC based on the electrical currents recovery time, even when there are other substances, like alcohol, present in the breath.”

Hwang works in the Star Lab, led by Alexander Star, PhD, professor of chemistry with a secondary appointment in bioengineering. The group partnered with Ervin Sejdic, PhD, associate professor of electrical and computer engineering at the Swanson School of Engineering, to develop the prototype.

“Creating a prototype that would work in the field was a crucial step in making this technology applicable,” says Dr. Sejdic. “It took a cross-disciplinary team to turn this idea into a usable device that’s vital for keeping the roads safe.”

The prototype looks similar to a breathalyzer for alcohol, with a plastic casing, protruding mouthpiece, and digital display. It was tested in the lab and was shown to be able to detect the THC in a breath sample that also contained components like carbon dioxide, water, ethanol, methanol, and acetone. The researchers will continue to test the prototype but hope it will soon move to manufacturing and be available for use.

“In legal states, you’ll see road signs that say “Drive High, Get a DUI,’ but there has not been a reliable and practical way to enforce that,” says Dr. Star. “There are debates in the legal community about what levels of THC would amount to a DUI, but creating such a device is an important first step toward making sure people don’t partake and drive.”

This research has been featured in a number of media outlets, including WTAE, KDKA, KDKA Radio, the Pittsburgh Tribune-Review, the Philly Voice, the Atlanta Journal-Constitution, Vice, Digital Trends and NPR/WBUR's "Here & Now."