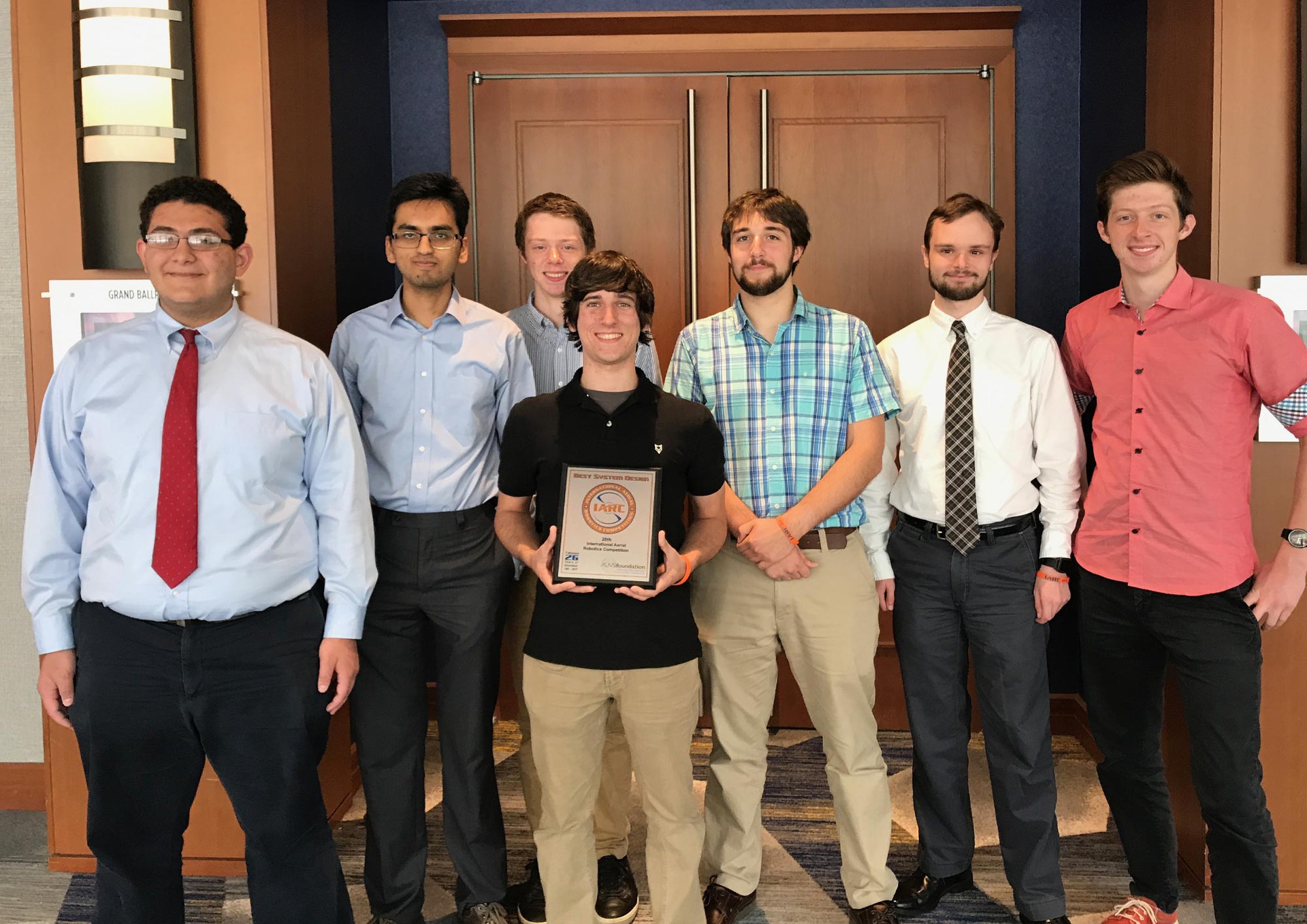 ATLANTA (August 14, 2017) … Two decades ago, the Georgia Tech Campus Recreation Center served as a swimming venue for the 1996 Summer Olympics. This past summer, the competitors weren’t battling with backstrokes or synchronized dives; instead they were waiting anxiously on the sidelines to see if their autonomous robot drones could herd a group of randomly-moving Roombas to one side of the floor while avoiding obstacles.

At the International Aerial Robotics Competition (IARC) Mission 7 at the Georgia Institute of Technology, the University of Pittsburgh Robotics and Automation Society (RAS) won Best System Design award and had the highest overall score out of 13 international teams present. The Best System Design award recognizes the overall design of the drone and its fitness for the mission, while points are awarded for flight performance and several static judging categories including a symposium presentation and a technical paper.

“We were able to demonstrate autonomous flight, takeoff, and landing,” says Andrew Saba, Pitt RAS Director of Outreach and a member of the Pitt RAS team. “A lot of the aspects of the mission work in simulation but have not been integrated and tested on actual hardware. We are proud of how far we have come, but we know there is much more left to go.”

The IARC Missions competition began in 1991, and each mission is repeated annually until it is successfully completed. Tsinghua University completed Mission 6 in 2013, prompting the creation of Mission 7.

Mission 7 challenges teams to design and build a fully autonomous aerial vehicle capable of navigating through an indoor environment without landmarks. As the drone flies through the environment, ground robots move randomly around the floor. The main objective is for the drone to “herd” the ground robots across one side of an arena by touching them, while also avoiding moving obstacles.

“Mission 7 is difficult because it requires the integration of many complex behaviors including localization without external landmarks, fast movement, target identification, obstacle avoidance, and artificial intelligence. Each of these is a research area in itself,” says Levi Burner, an electrical engineering undergraduate who led the Pitt RAS team at IARC alongside physics and computer science undergraduate Aaron Miller.

“This mission could be completed at the Asia-Pacific Venue this year, or maybe never. We just do not know,” says Saba. “We have a lot of work to do and are hoping to beat the mission. This is its fourth year, and we have only been working on it for one.”

“Competition allowed us to validate our design decisions, and this year the team will focus on higher level concepts such as interacting with ground robots and improving obstacle detection,” adds Burner. “While we did not interact with ground robots in 2017, we did lay a solid foundation and expect to have ground robot interaction completed in time for next year.”

The IARC intentionally designs the mission to be impossible based on commercially available technology. If the mission is not completed by a team at the Asia/Pacific Venue this year, the mission will be repeated in 2018. No team was able to complete the full mission at the American Venue, and only four teams were capable of flying autonomously during the competition, including the Pitt team.

“I was very impressed by what they were able to accomplish, especially in an international competition,” says Sam Dickerson, assistant professor of electrical and computer engineering at Pitt. “The project was totally student driven. Their workshop is next door to my office, and they worked every day on their design. There were many occasions I heard them working late in the evening. It’s really a great student group, not only are they active, they are very welcoming and make concerted efforts to include anyone and everyone who is interested in robotics.”