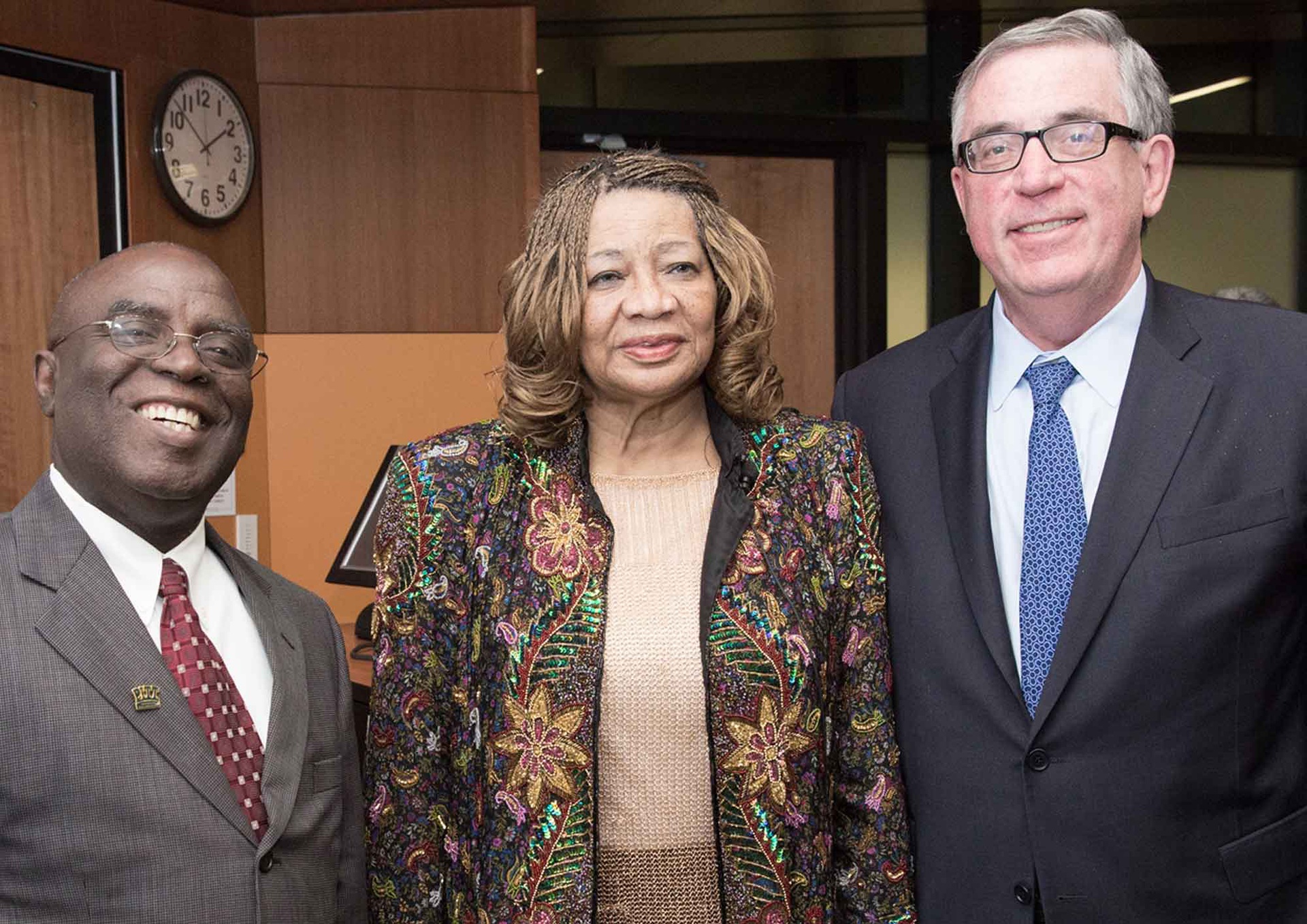 Dr. Arrington (center) is recognized by the Swanson School "for exemplary leadership and resilience as the University of Pittsburgh's first African American female engineering graduate" during Black History Month on February 28, 2017. With her are (left) Sylvanus Wosu, Associate Professor and Associate Dean for Diversity; and Gerald D. Holder, Distinguished Service Professor and U.S. Steel Dean of Engineering.

PITTSBURGH—The University of Pittsburgh African American Alumni Council (AAAC) will honor five Pitt alumni at a ceremony at 3 p.m. June 17 at the Wyndham Pittsburgh University Center, 100 Lytton Ave., Oakland. The AAAC Distinguished Alumnus Awards are given to outstanding African American Pitt alumni for their professional accomplishments as well as their community stature.

Elayne Arrington (ENGR ’61) cleared many hurdles in her quest to become an aeronautical engineer. She earned the second-highest SAT score in mathematics the year she graduated from Homestead High School as class valedictorian. But that year, for the first time in school history, the valedictorian did not deliver the address. Instead, it was given by the class president. Pitt recommended that Arrington receive the Mesta Machine Co. scholarship for employees’ top performing children to study mechanical engineering. But Mesta refused to give the scholarship to a woman. Despite that, in 1961 Arrington became the first Black female to graduate from Pitt’s Swanson School of Engineering. She worked as an aerospace engineer at Wright-Patterson Air Force Base’s Foreign Technology Division. She earned a PhD in math in 1974, the 17th Black woman in the country to do so, and returned to Pitt to teach mathematics for the next 40 years.

Martha Richards Conley (LAW ’71) was Pitt Law's first Black female graduate and the first Black female lawyer admitted to practice in Allegheny County. She was employed by the U.S. Steel Corporation for 27 years and retired from there as senior general attorney. A longtime opponent of the death penalty, she was chair of the Pittsburgh chapter of Pennsylvanians for Alternatives to the Death Penalty. She is a longtime member of the historic Aurora Reading Club in Pittsburgh. She is an official visitor with the Pennsylvania Prison Society and escorted Cape Town Archbishop Emeritus Desmond Tutu on a prison visit in 2007.

Robert “Bobby” Grier (BUS ’57) broke the color barrier when the Pitt Panthers fullback became the first African American college football player to play in the Sugar Bowl in New Orleans on Jan. 2, 1956, when Pitt faced Georgia Tech. The governor of Georgia strongly opposed Grier’s participation in the game, as did the Georgia Tech Board of Trustees, whose members said Georgia Tech would forfeit the game if Grier was not benched. But Grier had strong support of his teammates and Pitt, who vowed “No Grier, no game.” Support for Grier also came from students and football players from Georgia Tech, who strongly protested against a forfeit. Pitt lost the game, 7-0, on a controversial pass interference call on Grier. Later, evidence appeared to show it was a bad call. Pitt won a major victory off the field that year, thanks to Bobby Grier and his Pitt teammates.

Dame Vivian Hewitt (SIS ’44) received her library science degree from Pitt’s School of Library and Information Sciences. She began her career as the first Black librarian for the Carnegie Library in Pittsburgh. Later, she became the first Black chief librarian at the Rockefeller Foundation, the Carnegie Endowment for International Peace and the Council on Foreign Relations. Hewitt and her husband began buying works of Haitian and African American art while still a young couple, and now the Hewitt Collection is regarded to be one of the finest collections of its type in the world. It was purchased by Bank of America and gifted to the Harvey B. Gantt Center for African-American Art + Culture in Charlotte, North Carolina. The collection is on display at Pittsburgh’s August Wilson Center through June 30.

Cecile M. Springer (GSPIA ’71) holds a bachelor’s and master’s degree in chemistry and a master’s degree in urban and regional planning from the Graduate School of Public and International Affairs at Pitt. She achieved professional distinction in a number of fields throughout her diverse career, which has included positions as a research chemist for Bristol Myers Laboratories in New York, a principal planner for the Southwest Regional Planning Commission, president of the Westinghouse Foundation and founder of her own firm, Springer Associates, which provided comprehensive strategic planning. She has been recognized as a Distinguished Daughter of Pennsylvania, a Carlow University Woman of Spirit and a Legacy Laureate of the University of Pittsburgh — the highest honor for an alumnus. Springer is a past president of the Pitt Alumni Association.