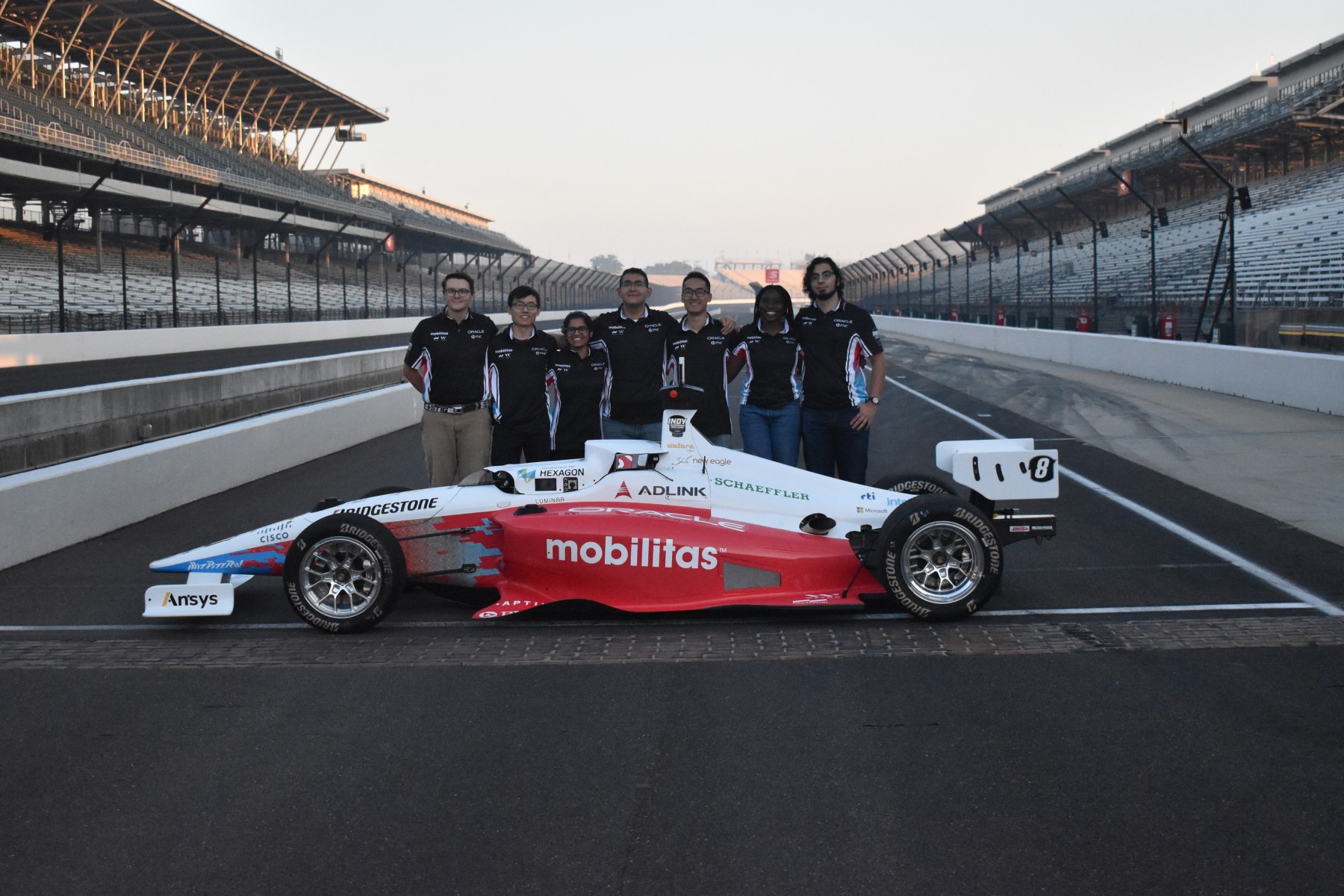 PittTeamIMS
The Pitt-MIT-RW team poses with their autonomous race car for the Indianapolis Autonomous Challenge.

Pitt undergrads take on the world at the Indianapolis Autonomous Challenge

Not only is she the lone woman captain of nine remaining university teams competing from across the globe, but Nayana Suvarna is also the youngest at 22, an undergraduate in a field clogged with PhDs and professional autonomous-car racers.

Oh, and she also is probably the only one without a driver’s license.

One certainly isn’t mandatory to steer a driverless vehicle in the Indy Autonomous Challenge. It takes place Oct. 23 at the famed Indianapolis Motor Speedway, home of the Indy 500, and puts $1.5 million in prizes up for grabs, with $1 million going to the first place team.

Suvarna and her 20 University of Pittsburgh student teammates — joining forces with MIT, Rochester Institute of Technology and the University of Waterloo in Canada — remain the sole undergraduates-based team. They’re true underdogs, competing to power their driverless Indy Lights-style vehicle, one rung below the 200-mph Indy Cars that fly around the famed 2.5-mile track known as The Brickyard.

“We placed fourth out of 16 teams” in a May simulation competition, said Suvarna, who is expected to graduate in December in computer engineering. “We’re hoping to keep up those odds and hopefully podium next Saturday. Hopefully, win first place and a million dollars.”

The only pressure is in those fat Indy Light car tires, right?

Not so fast, said the team’s advisor.

“The whole global autonomous community will be watching, and they’ll be watching University of Pittsburgh Swanson School of Engineering undergraduates competing against professionals,” said Sam Dickerson, associate professor of electrical and computer engineering. “This is an historic race. We’re fortunate in Pittsburgh, seeing autonomous vehicles is an everyday event here.”

A story of hometown and collaboration

Placing the race in historical context, Dickerson harks to the DARPA Grand Challenge in 2004 that so changed the face of robotics, there’s an exhibit about it at the Smithsonian Institution.

Now, global contenders are trying to race identical cars — built by Clemson experts — around The Brickyard and bring autonomous mobility to another level.

Among those entries are the gaggle of Pitt undergrads, raising their own bars. “I mean, they’ve been looking up PhD-level research and coding it out,” Dickerson said. “This competition is really unique: It’s an algorithm competition, pitting algorithms vs. algorithms.”

It started out as a pre-pandemic whim, a communique from race organizers: might Pitt be interested in a new race? Dickerson went to Suvarna, the president of Pitt’s Robotics Automation Society. The group was already deep into preparations for a small competition, but then COVID-19 scratched that. So Suvarna plunged in.

Dickerson joked, “This is her COVID project,” along with a small group from the society: Prem Bharatia, likewise due to graduate in December in computer engineering; along with Andrew Saba (ENGR ’19); and Josh Spisak, like Saba, a current MBA student down Forbes Avenue at Carnegie Mellon.

“If I’m being honest, we were ready to quit,” Suvarna said.

The price tag strained many of the competitors, but started the collaborative engines. First, MIT went in with Pitt, joining mostly undergraduate forces. The cost was halved to $300,000, still a pile of money for undergraduate students without funding or professional sponsorships like so many of their final competitors, 19 universities from around the globe combined into seven teams, plus stand-alone autonomous mainstays Auburn and Virginia.

Then, around December, Suvarna received a helpful nudge. Sergey Litvinenko (BUS ’13) who is the CEO of Koop, connected her with a new insurance company called Mobilitas. A main sponsor was found.

Soon after, Rochester Institute of Technology and Waterloo in Canada became team members of what organizers call the MIT-PITT-RW team. Suvarna’s team co-leader is Andrew Tresansky, an MBA candidate at MIT.

Not only is it the lone finalist comprised primarily of undergraduates — on another team, Suvarna marveled, “the interns are Masters students” — but their team is the lone finalist lacking a professor/advisor on-site and integral to the race team. A few teams have multiple professors/advisors, even.

“I appreciate the autonomy Dr. Dickerson gives us. He’s pretty much hands off,” Suvarna said. Dickerson added quickly: “Look at your shirts, that says it all.” Suvarna sat across a 12th floor Benedum Hall lab on Thursday wearing a slick, white-on-black team shirt, resplendent with sponsors such as Mobilitas and PNC, with the Indy Autonomous Challenge patch on the left shoulder. The students dressed themselves for success.

“They are such a good example of all the robotic ecosystem that has been built up in Pittsburgh,” Dickerson said. “Pitt is not historically known as a robotics school. But we teach the students the theories, the techniques […] but we don’t teach them about driving an autonomous vehicle 180 mph. This is a good story for the hometown that our students can do that.”

Heading for the starting line

In May, they finished fourth in simulations, hosted, by the way, via the same Ansys founded by the school’s namesake, John A. Swanson, and based in nearby Canonsburg.

In August, they met face-to-face or the first time, after more than a year of Zoom, Slacks and shared documents, to test and prep the car in Indianapolis.

They returned last weekend for further testing and team pictures; an MIT student designed their team shirts and the red-and-white look of the car.

They were set to reconvene at The Brickyard on Saturday, with qualifying Oct. 21-22, followed by the race on Oct. 23. Some 36 Pitt friends are expected to come to the Speedway and cheer on the team; 37, if Dickerson can make it.

The particulars for the finals haven’t been officially announced, but they expect a cross between time trials and student-driver exams. About that last part …

“I just never came around to taking the [driver’s] test,” said Suvarna, who is from Fairfax, Va. “Everybody finds that funny. But I’m in Pittsburgh all the time, 11 months a year… not driving a car.”

Next weekend, she helms a vehicle with history and $1 million sitting at American sports’ most storied finish line.

Pitt undergrads take on the world at the Indianapolis Autonomous Challenge