Rallying the Algae Warriors on an International Stage 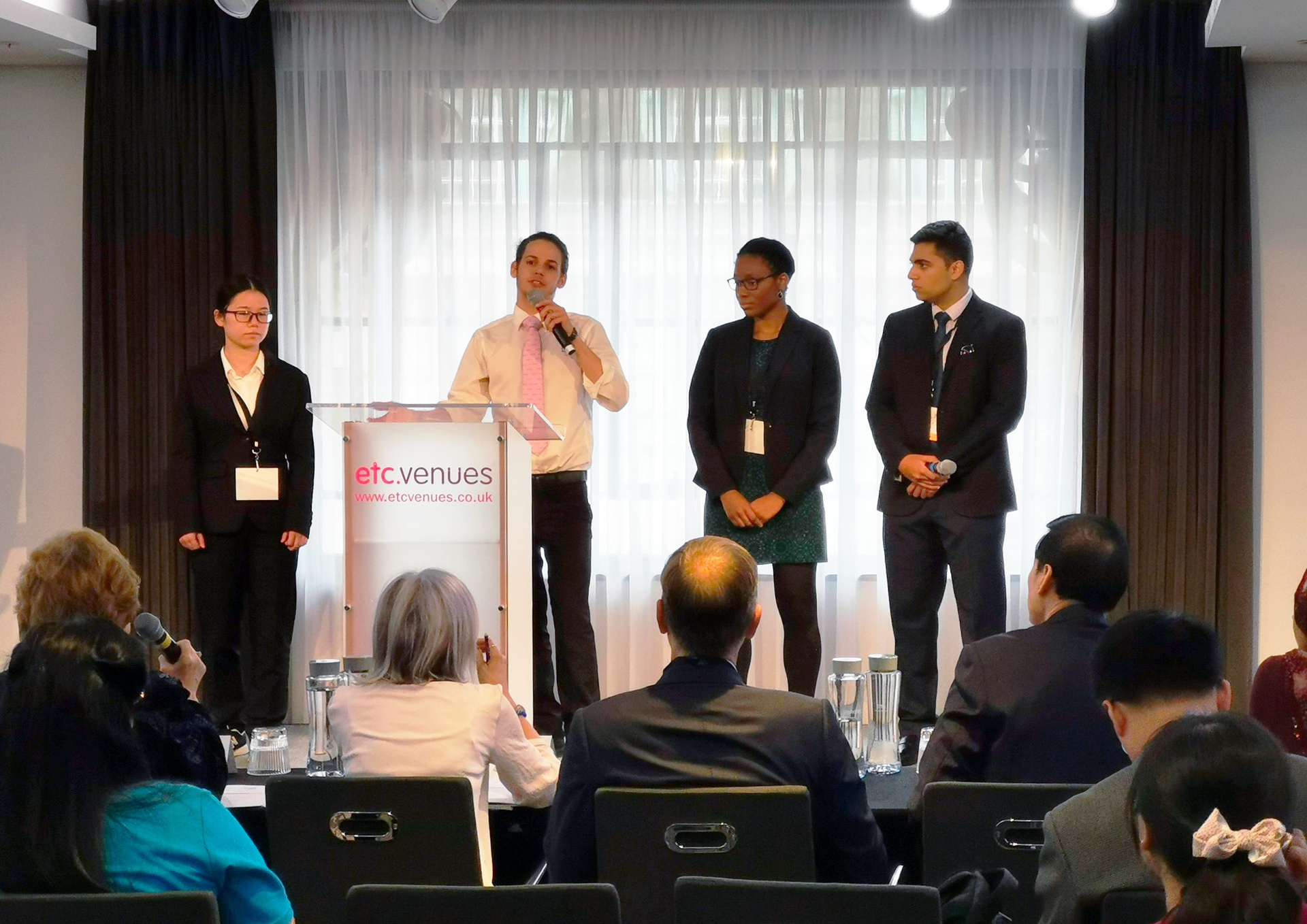 PITTSBURGH (Oct. 21, 2019) — Kareem Rabbat (CEE ’20), a student at the University of Pittsburgh’s Swanson School of Engineering, is driven to make a global impact. He is also no stranger to out-of-the-box ideas, or to working under pressure.

These attributes helped Kareem, a senior majoring in civil and environmental engineering, and his team members rise to the top at this year’s Global Grand Challenges Summit Student Competition in London.

The Global Grand Challenges Summit (GGCS) is hosted jointly by the UK, U.S., and Chinese academies of engineering and was held September 16-18 at the Southbank Center in London. The event invited the next generation of engineers to build creative collaborations and solve the 14 grand challenges for engineering outlined by the group. This year’s summit was centered around the theme “Engineering for an Unpredictable World” and asked attendees to think about goals like making solar energy economical, advancing personalized learning, engineering better medicines and providing access to clean water, among others. The first half of the week-long summit was devoted to the student team competition, with global engineering professionals joining the summit later.

Melissa Bilec, PhD, deputy director at the Mascaro Center for Sustainable Innovation, has been working to develop a National Academy of Engineering (NAE) Grand Challenge Scholar Program at the University of Pittsburgh; she nominated Kareem for the GGCS.

“It was a pleasure to nominate Kareem for this opportunity, and I was thrilled when he was selected.  Kareem is an exceptional, creative, and generous student,” says Bilec. “When he returned, he told me that the experience was life-changing. To be a small part of his journey is truly fulfilling.”

Mary Besterfield-Sacre, PhD, associate dean for Academic Affairs at the Swanson School, supported Kareem as well. “We are committed to ensuring not only exceptional student learning experiences but also advancing the school’s representation on a global stage,” she said. “And when an opportunity like GGCS presents itself and can benefit an outstanding student like Kareem, we will invest in that student’s success.”

On day one, 50 teams of students who had just met were given just 24 hours to brainstorm an idea that would address one of the group’s grand challenges, develop a plan, and pitch it to (mock) investors in industry. Teams were each made up of two students from the UK, two from China and two from the U.S.

Despite cultural differences and minor language barriers, Kareem’s team immediately discussed about the kinds of problems they wanted to focus on. They realized that despite coming to the competition with vastly different experiences, there were shared themes that resonated across the world.

“If you’re sitting and brainstorming for hours and only think of one idea, you’ve spent too much time,” he said. “But if you run through 20 ideas, you might be able to connect themes and combine the best ones and get to something really great. That’s how we came to this idea about wastewater treatment.”

Their idea focused on retrofitting wastewater treatment plants so that instead of growing bacteria they grow algae, which will trap carbon. That algae can then be repurposed as biofuel, fertilizer or a nutritional supplement. Kareem, whose other projects also focus on taking something wasteful and turning it into something valuable, recalled the times he’d heard of toxic algae blooms and the problems they cause. How could they use algae for good? After some speedy research, the team found an article showing it might be possible to use it in wastewater treatment. With that kernel of an idea, the newly christened “Algae Warriors” team was off and running.

Out of 50 teams, Algae Warriors was one of 10 chosen to present in the finals. The project that went on to win first place proposed sending wasteful fast-fashion textiles to India to be made into low-cost pads that would allow young girls there to continue to go to school while menstruating.

“I think our idea is a good one, but theirs allows girls to go to school,” he said. “If there’s a team to lose to, that’s the one.”

Although they did not win, the Algae Warriors will continue their work on algae as a water treatment system from afar, with support from the National Academy of Engineering. Inspired by the innovative ideas he encountered in London, Kareem also hopes to start a Global Grand Challenges chapter at Pitt so that others can get inspired—and then get involved.

“I saw a quote at the conference: ‘Act locally, think globally.’ We have a lot of environmental problems here in Pittsburgh like air pollution and sewer overflow,” he said. “Our problems aren’t isolated, though, and it’d be a good way for students to engage with them here and understand they’re problems everywhere.”

The Algae Warriors’ project is only one of several of Kareem’s ventures aimed at solving similar problems in Pittsburgh. His company, Ecotone Renewables, was founded last year to help address food waste and wasteful food production at the same time. The company’s anaerobic digestion system, housed in a repurposed shipping container, can turn 2000 pounds of food waste into 200 gallons of liquid fertilizer and 1400 kilowatt hours of energy in the form of captured methane gas every month. Currently the startup is perfecting the fertilizer so that by the next growing season they can hit the ground running and provide fertilizing resources to those who need it.

Over the summer, his research at Pitt with Sarah Haig, PhD focused on using microbial biodegraders of pollutants like bisphenol A (BPA) and nonylphenol in soil and watersheds. More recently, as part of his Engineering for Humanity certificate, he worked with Haig and Ian Nettleship, PhD, to study the effectiveness of low-cost ceramic filters at reducing the concentration of fecal indicator organisms.

“Kareem’s passion for this work is bottomless and contagious,” says Haig. “He never stops thinking of new ways that engineering can improve people’s lives.”

With so many balls in the air, Kareem has learned to be strategic with his time.

“All my professors all tell me to focus on one thing, and I hear that, but I don’t mind juggling,” said Kareem, who is set to graduate in the spring. “I’m still really young, and I want to figure out what I’m really interested in.”

Whatever it is he lands on, he is sure to jump in with both feet.

Rallying the Algae Warriors on an International Stage