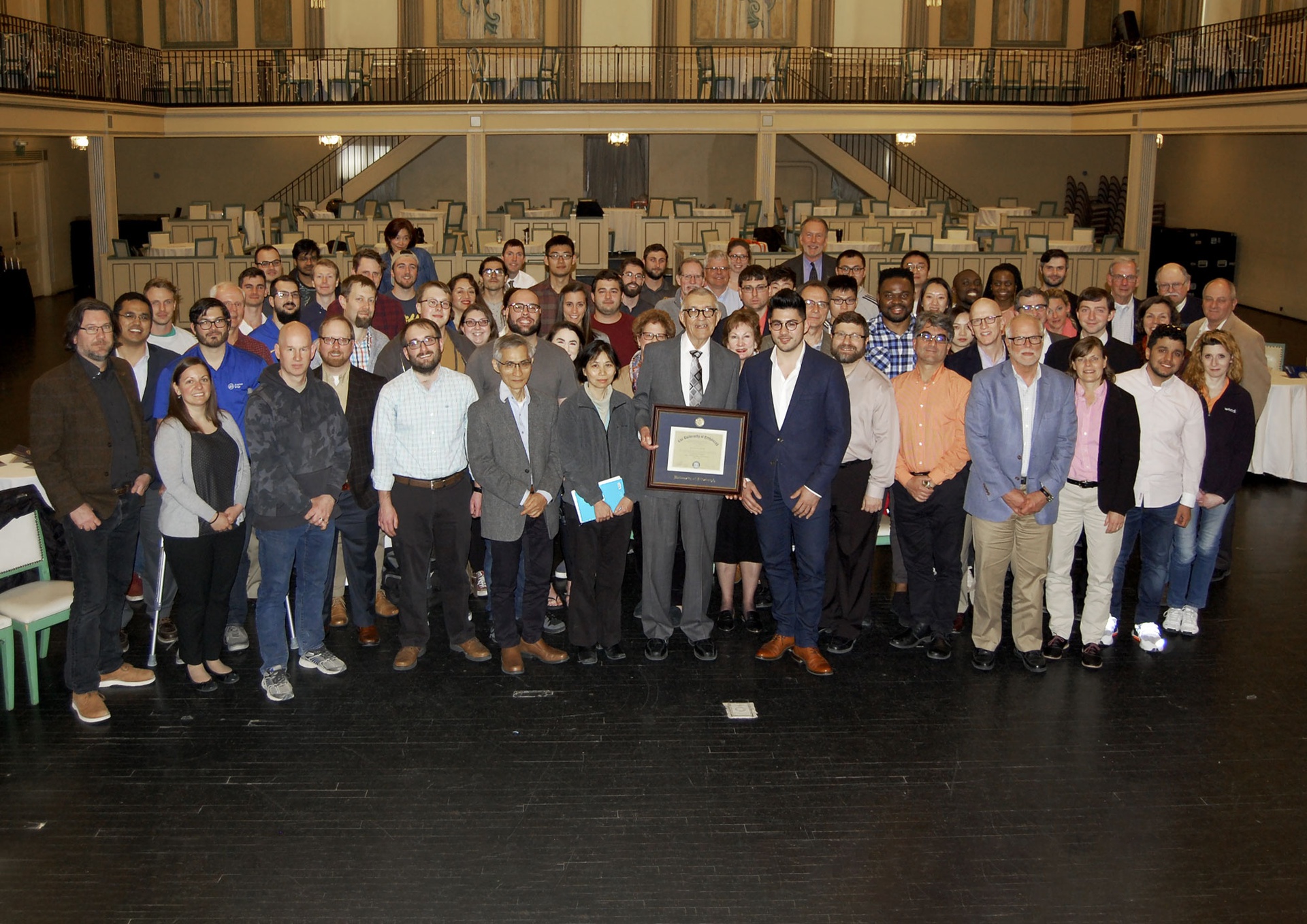 John Oyler, PhD, center, poses with the audience after delivering the 2019 Landis Lecture on April 11, 2019.

PITTSBURGH (April 24, 2019) — When John Oyler was invited to take the stage to deliver the 2019 Landis Lecture, entitled “Eight Decades of Wisdom Gathering,” he promptly stepped back off, preferring to roam amongst the audience as he spoke.

“Wisdom,” he began, “is not correlated with intelligence. It is the accumulation of thousands of experiences that are evaluated and stored subconsciously.”

He explained that wisdom, not just intelligence or talent, is the reason long-time engineers can spot problems at a glance that new engineers might overlook. After decades of experience, patterns become clear and errors become obvious.

Dr. Oyler, associate professor of civil and environmental engineering at the University of Pittsburgh’s Swanson School of Engineering, has been a professor since 1993, a position he took after retiring from 40 years in industry. Since 1953, he has worked for Dravo Corporation, Daxus Corporation and his own consulting firm, Oyler Consulting Services.

“So do I have any right to talk about wisdom?” Dr. Oyler asked the crowd, rhetorically. “You bet I do.”

The lecture took place at the 20th Century Club on April 11, 2019. In it, Dr. Oyler identified three traits that effective engineers possess: focus, judgment and creativity.

A disaster like the Florida International University pedestrian bridge collapse is the result of losing focus on the fundamentals, he explained. San Francisco’s shuttered Transbay Terminal is a result of poor engineering judgment.

But on the positive side, creativity, independent thinking and innovative solutions are what engineering is all about. The Bayonne Bridge, which at the time of its construction in 1932 was the longest steel arch bridge in the world, was too low to allow the new, bigger cargo ships to pass under it. Rather than demolishing the bridge, engineers raised the deck, preserving it and saving time, money and resources.

“For every failure,” Dr. Oyler said of engineering, “there are thousands of successes.”

Dr. Oyler ended his lecture with three pieces of advice for engineers: to not compartmentalize themselves in their specialty but to remain curious and open to learning; to be willing to take a chance and try something new, even if they think it is beyond their capabilities; and to have confidence in themselves.

“We're living in a time when there is more knowledge available than ever before, and the capability to access it is in your jacket pocket,” said Dr. Oyler.

“The Landis Lecture is intended to inspire. When selecting John for this honor, we had no doubt that adding John’s name to the list of distinguished recipients was not only appropriate but exceptionally well-earned,” said, Kent Harries, professor of structural engineering.

The Landis Lectureship was established by the Department of Civil and Environmental Engineering in 1991 in honor of Donald H. Landis, president of Epic Metals Corporation and a 1952 graduate of Pitt.