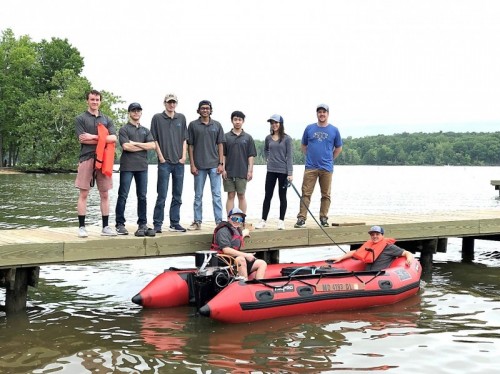 The PEP competition is an educational and competitive program to foster the development of electric watercraft in the United States.  Each college team received up to a $7000 technology mini-grant to construct an electric-powered boat that can complete a five-mile race.  The competition had manned and unmanned categories, with Pitt participating in the former.

The team was donated a 1967 Mercury Thunderbolt combustion outboard and fully retrofitted the system to run on electric, including the design of an extended tiller arm to control the boat. Team member, Nicholas Genco, notes, “We converted a 1967 mercury 50 horsepower out board utilizing a Motoenergy ME1616 paired with a Kelly 8080ips control. Utilizing this and our custom built battery pack, we are able to produce approximately 30 horsepower continuously and 50 horsepower peak.”

Pitt was the only team to power their manned watercraft with a battery that was completely designed and fabricated by the student team. They traveled 3 miles in 37 minutes, earning them a third place finish.

The team was very proud to place in their first year at the competition and they are excited to continue to improve their design for next year’s PEP competition.