PITTSBURGH (December 4, 2018) … Amidst an energy and manufacturing renaissance fueled by hydrofracturing and the Marcellus and Utica shale deposits, the city of Pittsburgh continues to attract leading professionals and experts in chemical engineering.

More than 5,600 chemical engineers gathered in the Steel City to attend the American Institute of Chemical Engineers (AIChE) Annual Meeting from October 28 to November 2. The meeting, which took place at the David L. Lawrence Convention Center, marks the second time Pittsburgh hosted the professional society in six years.

“We are honored to once again have Pittsburgh, with its many resources and institutions, provide the setting for AIChE’s annual meeting, which brings together chemical engineers from all over the world representing academia, industry and all facets of the discipline,” says Karl Johnson, the William Kepler Whiteford Professor of Chemical and Petroleum Engineering at the University of Pittsburgh Swanson School of Engineering.

AIChE held its first Annual Meeting in Pittsburgh 110 years ago, but the theme of this year’s meeting “AIChE + Chemical Engineering: Today, Tomorrow & Leading the Future” focused on looking forward to cleaner fuels, cost-saving manufacturing processes and a variety of other topics geared to usher in the next era of chemical engineering. 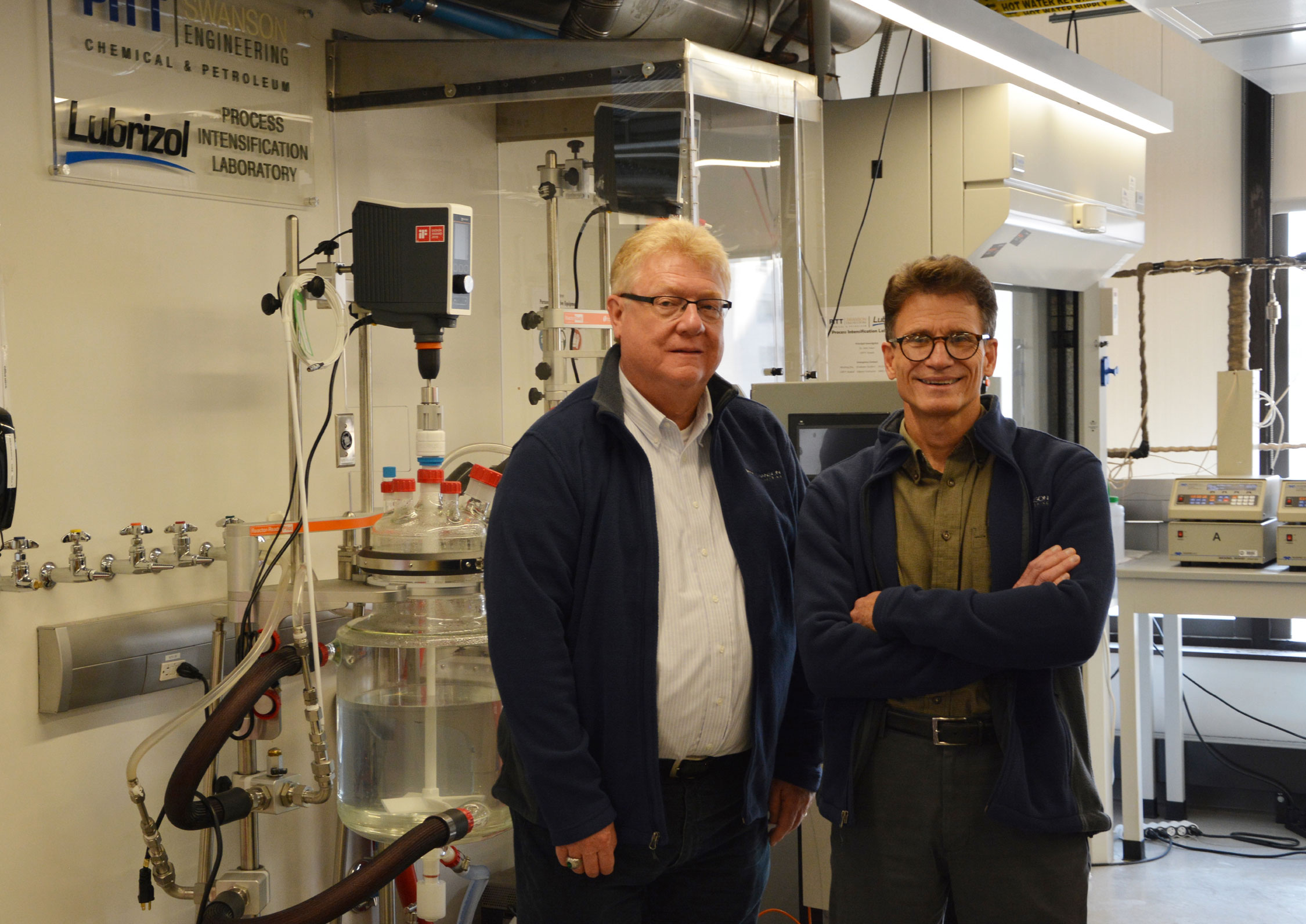 Cheers to the Co-Chairs

Dr. Johnson served as AIChE Meeting Program Co-Chair alongside Cliff Kowall, Senior Technical Fellow in the Process and Development Department and the Corporate Engineer at The Lubrizol Corporation in Wickliffe, Ohio.

Pitt’s Department of Chemical and Petroleum Engineering and Lubrizol formed a strategic research partnership in 2014, and the two co-chairs built upon their understanding of how academic and industrial collaboration can benefit the region’s economy and workforce while preparing for the annual meeting.

“Pittsburgh was hit hard in the past by failing to adapt to new steel production techniques being developed elsewhere,” says Kowall. “If we’re going to stay ahead of these disasters in the future and get the most out of our present resources we need to be thinking beyond how changes affect our singular industries and consider the big picture that includes us all.”

Kowall led a conference session about short-sightedness in Pittsburgh’s past titled “What the Heck Happened? Past, Present & Future Disruptions to the Chemical/Fuels Business.” Dr. Johnson’s session titled “The Future of Energy in the Region, Nation, and World” focused on energy research and development. Both sessions averaged more than 400 attendees. 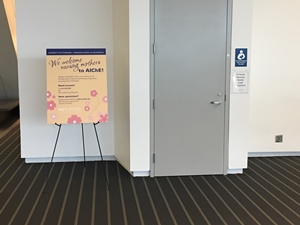 This year’s conference felt more welcoming to new mothers thanks largely to efforts by the University of Pittsburgh’s Susan Fullerton, assistant professor of chemical and petroleum engineering. Motivated by her own past experiences, Dr. Fullerton arranged to increase the visibility and quality of nursing stations at the conference.

“I’m a mother of two, and I’ve attended many conferences while nursing. It’s important to me as General Arrangements Chair to have this accommodation ready and welcoming to new mothers,” she says. “If there are no resources at the venue that are comfortable and reasonably private and stocked with what you need, then you return to your hotel room which could be far away. The penalty for nursing mothers is missing a big portion of the technical conference.”

A nursing room or “Mother’s Room” consists of a sizeable yet private space that contains a refrigerator, water and breast milk storage bags. This year, the Department of Chemical and Petroleum Engineering sponsored the items in the room. Dr. Fullerton hopes this properly-advertised and conveniently-located room encouraged new mothers to attend the conference and prevented them from viewing their situation as an inconvenience.

“We’re in a transition period. Accommodations for nursing mothers were unheard of not very long ago. Now it’s not plentiful, but it’s emerging. I think AIChE can really make a splash by making improvements in this area,” Dr. Fullerton adds. 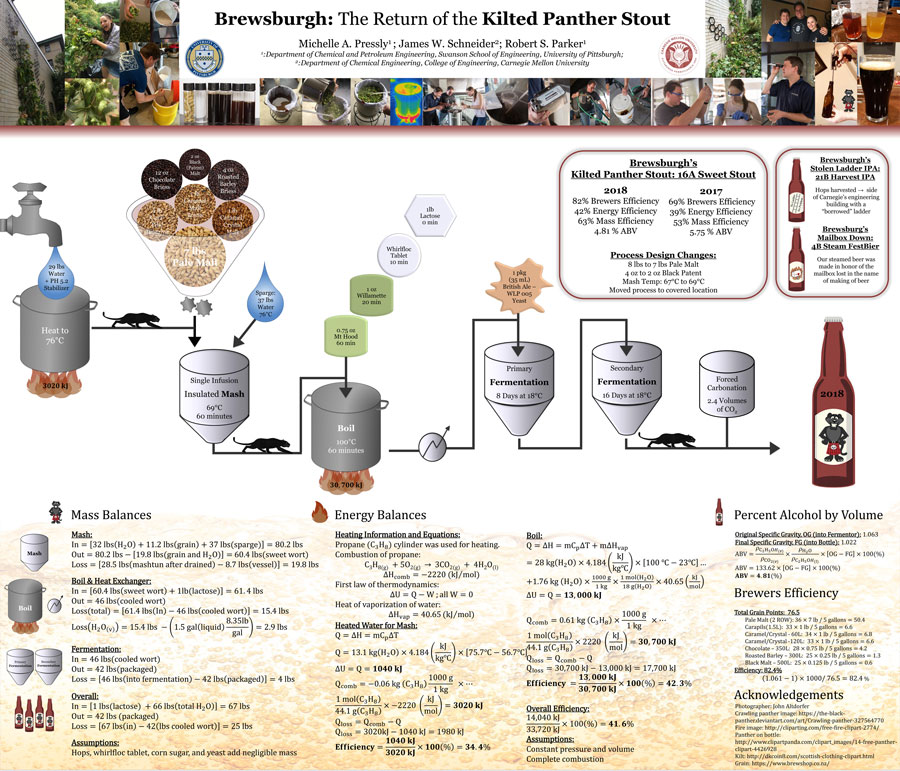 Cheers to the Beers

For the past two years, the AIChE Annual Meeting has created a buzz by hosting a beer brewing competition. A team of chemical engineers from Pitt and Carnegie Mellon University won this year’s Best in Show and People’s Choice awards for their “Kilted Panther Stout.” (View a pdf of the poster.)

Meeting organizers invite official Beer Judge Certification Program (BJCP) judges to assess the quality of the chemical concoctions on tap. AIChE members can also weigh in on the home brewers’ malt mastery as long as they are at least 21 years old. The local “Brewsburgh” team first submitted its milk stout to last year’s AIChE brewing competition.

“We knew we had improved our taste and quality from last year,” says Robert Parker, Robert v.d. Luft Professor and Vice Chair for Graduate Education in Pitt’s Department of Chemical and Petroleum Engineering. “We responded to the judges’ comments and made a small number of very controlled adjustments.”

“AIChE members voted for the People’s Choice Award, and the Best in Show Award came from the BJCP judges,” explains Dr. Parker. “We scored a 36 points out of 50 last year. This year’s scores aren’t out yet, but we are hoping to improve from Very Good to upper-range Excellent score (38-44) with our Best in Show brew.” 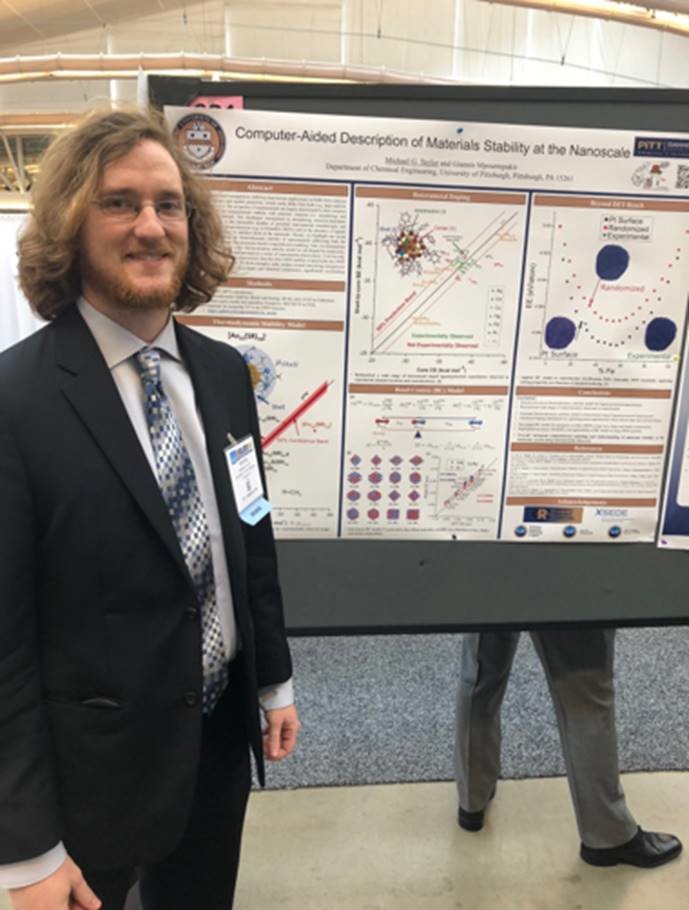 Research on a Scale of Its Own

Taylor works in the Computer-Aided Nano and Energy Lab (CANELa) under the direction of Giannis Mpourmpakis, the Bicentennial Alumni faculty fellow and assistant professor of chemical and petroleum engineering at Pitt. Among his 10 publications on high impact scientific journals (Nature, Nature Communications, etc.) that helped Taylor win the award was research with Dr. Mpourmpakis into how computer simulations help identify and synthesize new metal nanoparticles.

“At CANELa, we are exploring extremely complex properties of nanoparticles, and Michael has made enormous contributions to our success since he joined us,” says Dr. Mpourmpakis. “The breadth and depth of his research gives us every reason to believe that this is just the beginning of a bright and impactful career.” 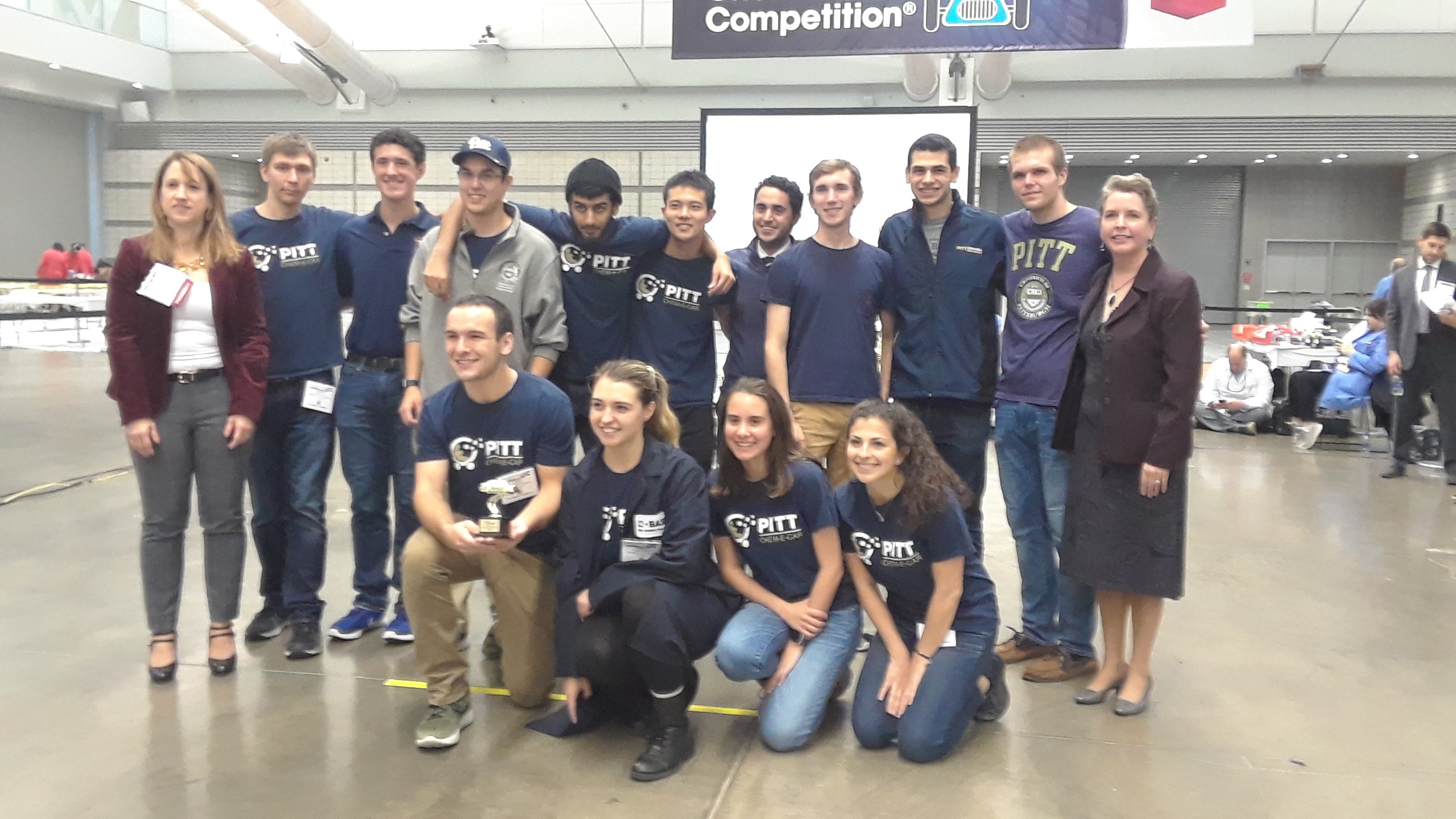 The University of Pittsburgh Chem-E-Car Team won The Golden Tire award, which recognizes the team with the most creative design. The team qualified for the national competition last April when their car, “The Volts Wagon,” placed in the top five at the AIChE Mid-Atlantic Regional Conference.

“The Golden Tire award is voted on by each of the 47 national and international teams who qualified for the competition,” says Taryn Bayles, professor of chemical and petroleum engineering and Pitt Chem-E-Car team supervisor. “Our team also won second place in the poster competition, which is a testament to all the hard work and late nights they put into this project since last spring.”

The Chem-E-Car Competition requires teams to design a shoebox-sized car able to travel between 50 to 100 feet while carrying a payload between zero and 500 milliliters of water. The car must be powered by chemical reactants and include a second chemical reaction as a stopping mechanism. Cars that travel too far or not far enough are disqualified from the competition.