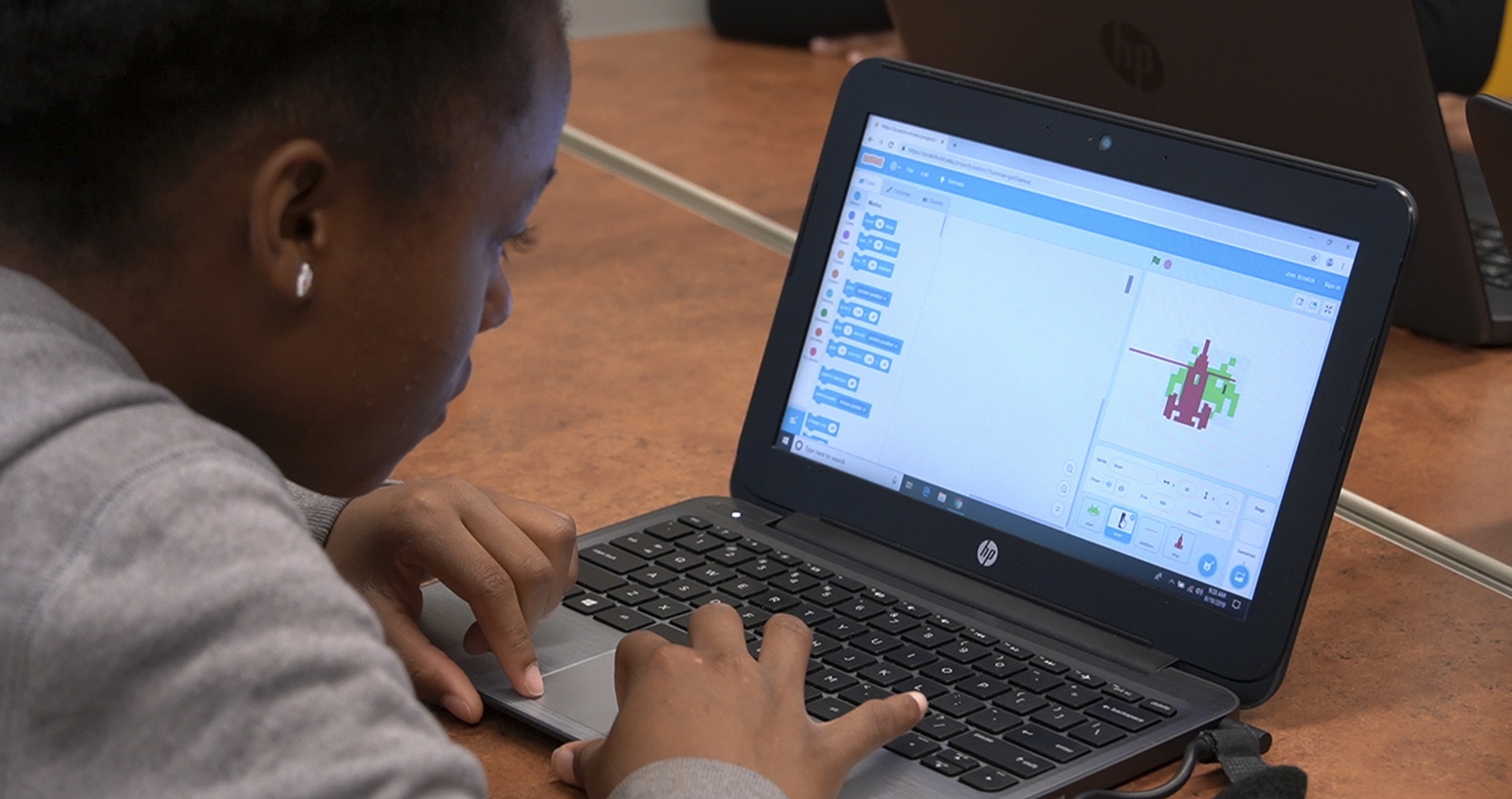 Ameena Bradford works on recreating Space Invaders as part of the Pitt Community Engagement Center in the Hill District's STEM mini-camp. Ameena said this camp helped revitalize her interest in the sciences. (Christin Bongiorni/University of Pittsburgh)

Reposted from PittWire. Click here to view the original story.

When Ameena Bradford entered the University of Pittsburgh Center for Biotechnology and Bioengineering, she didn’t know what went into the creation of a video game, but she was excited to see what was in store.

What the 12-year-old Pittsburgh public school student found was a reignited interest in science and technology, with the help of a classic arcade game.

Ameena and 14 other students from Pittsburgh’s Hill District put their coding skills to the test to recreate the 1978 game Space Invaders this June, using a computer program provided by Pitt’s Swanson School of Engineering and the School of Computing and Information. The coding exercise was part of a three-day STEM mini-camp hosted by Pitt’s Hill District Community Engagement Center (CEC) as part of the larger Swanson School’s annual Camp BioE.

Using graphics created prior to the event, the students were able to input simple commands for the spaceship, alien invaders and the lasers — represented by cats — used to defeat the aliens.

“Before, I liked science, but it kept getting harder and harder to learn. This made it kind of easier,” Ameena said.

“This is more fun, because the teachers are nice and they help us to learn by making it more interesting,” said Alyssa, 9, Ameena’s younger sister.

“It’s a lot of fun working with these kids,” said Dmitriy Babichenko, professor of practice at the School of Computing and Information, who led the students in coding the game. “They start out being skeptical and then you can see the light bulbs coming on as they get excited to see that something works. It’s fun to see that excitement develop.”

The STEM camp comes at a transitional time for the students; some studies, such as one published in the Journal of Women and Minorities in Science and Engineering, have shown that students, particularly girls, begin to lose interest in the sciences upon entering middle school. Camp leaders say they hope STEM learning opportunities like this encourage students — especially those from underrepresented populations — to further pursue science and technology studies during their high school and college years. This could lead to better employment opportunities, too: STEM jobs in computer analyst and development fields are projected to increase as much as 32% beginning in the 2020s, according to the U.S. Department of Education.

While Camp BioE has been providing summer STEM activities for mostly middle school-age students for the past 10 years, this year was the first time it teamed up with the CEC and the School of Computing and Information.

Camp director Steven Abramowitch said even though this year’s students were the youngest Camp BioE has worked with, they were also some of the most passionate and easily engaged.

“They were interested and curious, so when we saw this opportunity to make the connection (with the CEC) for the summer, we knew this was something we wanted to do,” said Abramowitch, who is also an associate professor of bioengineering at the Swanson School. “The game design for Space Invaders is simple, so we thought this was something easy for the students to grasp in terms of game design. We hope that events like these give students confidence to pursue their passions.”

June’s mini-camp was the first of many upcoming collaborations between the Pitt Community Engagement Centers, the Swanson School and the School of Computing and Information. One of these includes creating a STEAM Studio as part of the CEC’s permanent space at the New Granada Theater.

The camp’s in-community and on-campus curriculum is also an example of how the Hill District Community Engagement Center seeks to build bridges between the University and the community for mutual benefit: Pitt faculty establish new partnerships, Pitt students learn from and with community members in a real-world setting and Hill District youth have the opportunity to explore STEM fields in an enriching and educational setting.

“We wanted to help bring youth from the Hill District in one of the most underserved sections, Bedford Dwellings, here on campus to continue exploring possibilities in STEM fields,” said Kirk Holbrook, director of the Hill District CEC. “We hope to start planting the seeds of future realities for these children. With activities like coding a video game, they’re fun, but also educational. They’re intensive, but we saw engagement.”

The CECs are part of Pitt's Neighborhood Commitments, which build stronger communities and a stronger University based on long-term place-based partnerships. In collaboration with local communities, the University is making a minimum 15-year commitment of investment, infrastructure, programming and dedicated staff in neighborhoods such as Homewood and the Hill District. The CECs aim to host events and offer services for community members related to youth education enrichment, employment, health and wellness, the cultural arts and small business growth and development, among other topics. The Hill District CEC is Pitt’s second Community Engagement Center — the CEC in Homewood opened in October 2018.