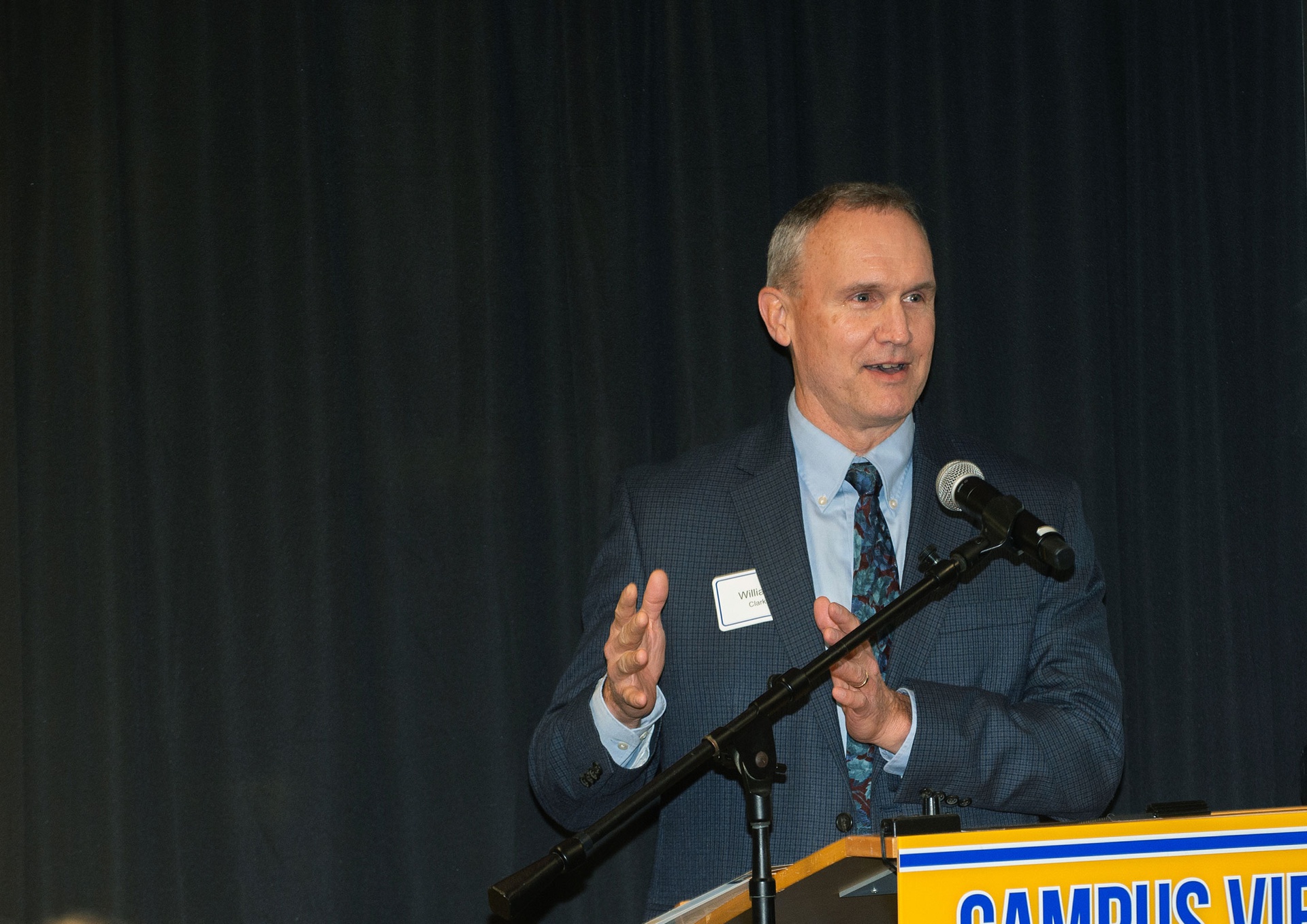 William “Buddy” Clark, professor of mechanical engineering and materials science, was awarded the Outstanding Innovator Award at the Celebration of Innovation on Nov. 20 at Petersen Events Center. (Mike Drazdzinski/University of Pittsburgh)

This article originally appeared in the University Times. Reposted with permission.

PITTSBURGH (November 21, 2019) ... The Innovation Institute celebrated the Pitt faculty, students and staff who are working to make their ideas and research discoveries have a real-world impact at the 14th annual Celebration of Innovation, on Nov. 20 at the Petersen Events Center Campus View Club.

“Our theme this year is ‘Powering Invention. Igniting Progress,’ and there can be no denying that the growing innovation and entrepreneurship ecosystem at Pitt and in the region is igniting a firestorm of innovation across the University,” said Evan Facher, director of the Innovation Institute.

In the past five fiscal years (2015-2019), the number of invention disclosures filed with the Innovation Institute by Pitt faculty, students and staff are up nearly 30 percent over the previous five-year period. Patents issued were up nearly 80 percent, and startups formed were up nearly 150 percent.

Facher said in the past five years there have been 440 patents issued to Pitt-related inventions, 80 start-up companies formed and 1,700 inventions brought to the Innovation Institute —  “practically one for every day of the last five years.” The role of the Innovation Institute, he said, is to connect people from different parts of Pitt, because, “that’s where innovations take root.”

There’s still plenty of opportunity for more faculty to get involved in entrepreneurship, Facher said. Currently, less than 10 percent of Pitt faculty are working with the Innovation Institute on inventions.

Rob Rutenbar, senior vice chancellor for Research, said the gathering celebrated the entrepreneurs and changemakers who want to bring their ideas to a commercial reality and maybe make the world a better place. “I would like to suggest you’re here in at least in some part because the right guidance from the University of Pittsburgh was able to inspire you and able to enable you to make your vision real.”

In addition to Pitt Innovator awards being presented to the people behind the record 162 transactions (licenses/options) in fiscal 2019, several special awards were presented.

The Mickle Award is presented to a Pitt faculty member who has demonstrated a sustained commitment to commercializing his or her research and ranks among the University’s prolific innovators in terms of the number of invention disclosures, patents and licenses they have been involved with.

Clark is one of the most collaborative scientists at Pitt, lending his expertise to research projects ranging from pollution control valves to electronic intravenous catheters. But his true passion is baseball, as a coach, a fan and an inventor. Clark co-founded Pittsburgh-based Diamond Kinetics based on technology he developed to measure aspects of a baseball/softball player’s swing (read more about his work in the University Times). Clark also oversees the maker spaces at the Swanson School of Engineering and is director of the Innovation, Product Design, and Entrepreneurship Program.

Clark is a tireless voice for entrepreneurship and innovation in the Swanson School and throughout the University, Handron said.

The Emerging Innovator Award is presented to an early-to-mid-career faculty member who has shown a keen interest in innovation commercialization and is dedicated to achieving impact through commercial translation of research.

Fedorchak leads the Ophthalmic Biomaterials Laboratory. In her lab’s first four years, it has demonstrated an intense focus on translational science and has launched two projects on a commercialization pathway. She has taken advantage of a range of educational programming and funding opportunities to move her innovations from the lab towards the market. These include the First Gear commercialization program, the Michael G. Wells Competition, and Chancellor’s Innovation Commercialization Funds, as well as consulting regularly with licensing managers and entrepreneurs in residence.

This award is presented to a Pitt student of any level who has embraced innovation and entrepreneurship as a career path and have participated in the Innovation Institute’s Big Idea Center programs and competitions to help bring their ideas to life.

Siegal is the founder of Trek, a startup company developing solutions for eco-friendly dental care for people on the go. She brought her chemical engineering class project idea for a chewing gum that cleans teeth both mechanically and chemically to the Big Idea Blitz event in January 2019 and won a prize in the pitch competition. She then entered the Randall Family Big Idea Competition. Competing against 300 fellow students, she and the team she assembled for the competition won the $25,000 top prize. From there, she entered the Big Idea Center’s Blast Furnace student accelerator. She is now in the first cohort of the Forge, the University’s new student startup incubator.