PITTSBURGH (January 29, 2018) … The University of Pittsburgh Innovation Institute hosted its biannual Startup Blitz where nearly 50 students from across the University presented their ideas and innovations to a panel of peers and entrepreneurial experts. The Swanson School of Engineering students had a strong showing and were represented in each of the top three teams. These teams demonstrated interdepartmental collaborations that proved successful in creating ideas that spoke to fellow entrepreneurs.

The top prize went to a project that may look familiar to those who attended the School’s fall semester Design Expo. The Posture Protect team of bioengineering students Tyler Bray, Raj Madhani, Jacob Meadows, and Vaishali Shetty came out on top again. They pitched their prototype for a device that helps improve posture for individuals with Parkinson’s disease to the panel of judges and were presented the first place award of $1,500. 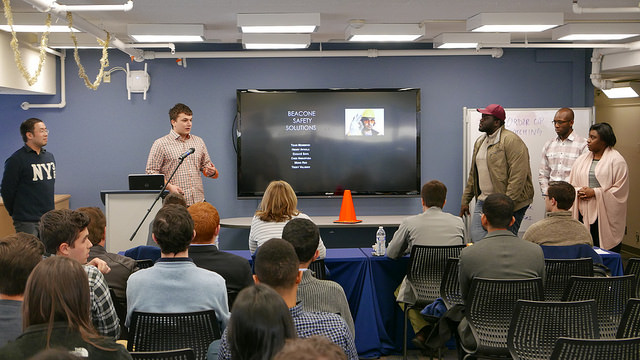 “I am delighted this team of students and their project from our fall 2017 ENGR 1716 Art of Making class won 1st place at Startup Blitz,” said Joseph Samosky, assistant professor of bioengineering and course director of The Art of Making.

“In our course we promote human-centered design, the ability to frame and innovatively solve real-world problems, and how to effectively communicate your ideas to others,” said Samosky. “The Posture Protect team pursued an outstanding design thinking process, and they richly deserve the accolades they’re getting. Their project has real potential to help people with Parkinson’s.”

The first runner up team included chemical engineering and Pitt STRIVE student, Henry Ayoola and electrical and computer engineering student, Teddy Valinski. They created Beacone, a safety program for manufacturing plants and construction sites that utilizes a smart device. The team was awarded a prize of $1,000. 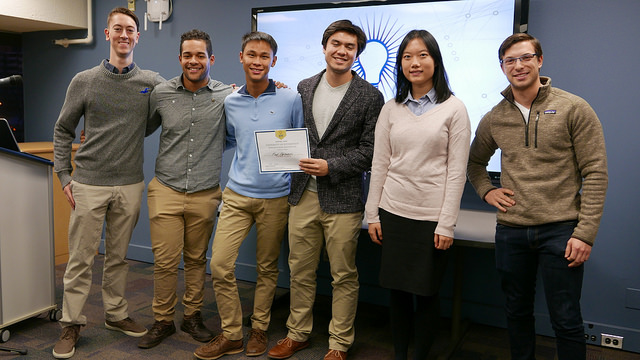 The second runner up team included electrical and computer engineering student, Dan Chi and bioengineering student, Ruben Hartogs. They created Four Growers, an automated device for harvesting tomatoes in commercial greenhouses. They were awarded $500 for their innovation.

The Innovation Institute encourages students with entrepreneurial aspirations to apply to the upcoming Randall Family Big Idea Competition. Applications are due February 5.

Read the entire news release from the Innovation Institute.