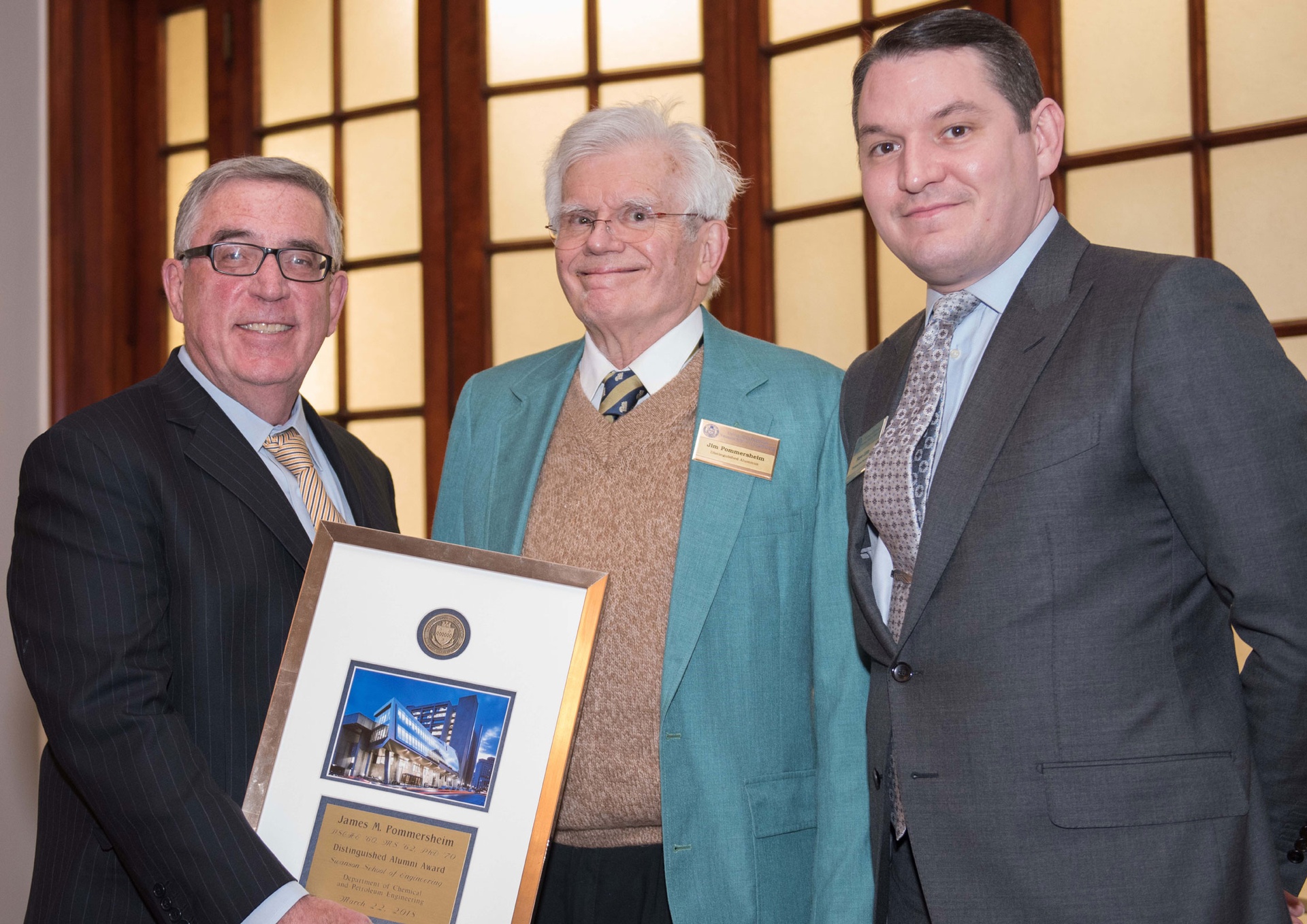 This year’s recipient for the Department of Chemical and Petroleum Engineering is James M. Pommersheim, BSCHE ’60, MS ’62, PhD ’70, Professor of Chemical Engineering at Bucknell University.

“An accomplished researcher, Jim is also a passionate teacher and has worked to recognize our outstanding educators,” said Dean Holder. “His teaching awards at Bucknell are numerous, and in kind, he established the James Martin Pommersheim Award for Excellence in Teaching here at our Department of Chemical and Petroleum Engineering. We thank Jim for his dedication to teaching both the countless students of the past and our Pitt students of tomorrow.”

James M. Pommersheim received three degrees from the University of Pittsburgh Department of Chemical Engineering: his BSCHE in 1960, his MS in 1962, and his PhD in 1970. He first became interested in teaching while serving as a teaching assistant at Pitt where he had many opportunities to interact with the faculty of the department, most notably its chair, Edward Stuart. These engagements led to his successful tenure as Professor of Chemical Engineering at Bucknell University from 1965 to 2003 and the fall semester of 2006.

Dr. Pommersheim specialized in conceptual and mathematical modeling in chemical engineering with research centered on transport in cementitious systems. At Bucknell he was instrumental in establishing the transport theory sequences of courses as well as a course in applied mathematics which emphasized modeling along with mathematical methods. He also taught operations research in the Management Department. He served as Visiting Research Professor at The Pennsylvania State University in the summer semesters of 1988 and 1989. At Syracuse University, he served as Visiting Professor, Department of Biomedical and Chemical Engineering, in the Spring semesters of 2005, 2006, and 2011.

In 2014, Pitt’s Department of Chemical and Petroleum Engineering established the James Martin Pommersheim Award for Excellence in Teaching in honor of a significant legacy gift made by Dr. Pommersheim. The award recognizes one outstanding departmental faculty member annually in the areas of lecturing, teaching, research methodology, and research mentorship of students, as well as the conduction of seminars, tutorials, and recitations.

In addition to his extensive teaching career, Dr. Pommersheim served as a research associate for the National Institute of Standards and Technology (NIST), Occidental Research and Petroleum, Mobil Oil, and NASA. He provided consulting services for the Center for Building Technology and for the Materials Research Institute at Penn State. He has authored a number of publications and held many presentations at national and international meetings.

Dr. Pommersheim is a member of AIChE as well as several other professional and honorary societies. His specific honors and awards include: Faculty Advisor to Outstanding Senior Design Teams in the Smith College of Engineering, Syracuse University (2005 and 2006); Outstanding Paper Award from the Society of Coating Technology (1996); ASEE Mid-Atlantic Region Award for Excellence in Instruction of Engineering (1984); Class of 1956 Award for Inspirational Teaching, Bucknell University (1985); Invited Scholar, Faculty Development Program of Queen’s University (1982); and the Lindback Award for Distinguished Teaching, Bucknell University (1979).