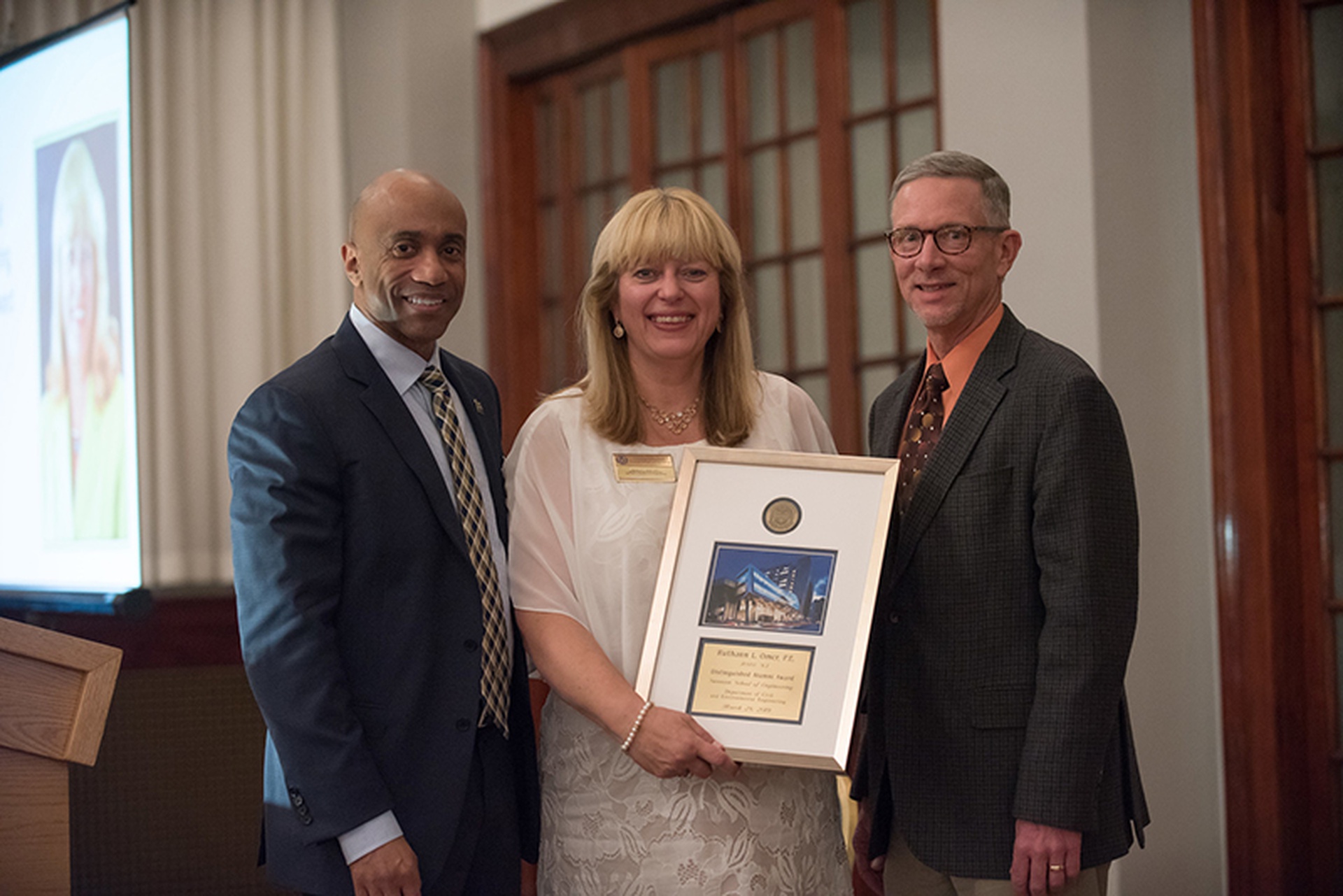 PITTSBURGH (April 11, 2019) ... This year’s Distinguished Alumni from the University of Pittsburgh Swanson School of Engineering have worked with lesson plans and strategic plans, cosmetics and the cosmos, brains and barrels and bridges. It’s a diverse group, but each honoree shares two things in common on their long lists of accomplishments: outstanding achievement in their fields, and of course, graduation from the University of Pittsburgh.

This year’s recipient for the Department of Civil and Environmental Engineering is Ruthann Omer, P.E., BSCE ‘83, President and CEO of Omer Advisors.

The six individuals representing each of the Swanson School’s departments and one overall honoree representing the entire school gathered at the 55th annual Distinguished Alumni Banquet at the University of Pittsburgh’s Alumni Hall to accept their awards. James R. Martin II, US Steel Dean of Engineering, led the banquet for the first time since starting his tenure at Pitt in the fall.

“For more than 150 years, civil engineering alumni from Pitt have made outstanding contributions to society and human life, and Ruthann is no exception,” said Dean Martin. “We would like to recognize her for her impact on the field of civil engineering in the region, as well as her philanthropic support of the next generation of women engineers.”

Ms. Ruthann Omer was the President of The Gateway Engineers, for 25 years where she helped create and implement successful business strategies. The company has over 150 employees and three offices in the region. Ms. Omer spent over three decades serving on the Board of Directors while also managing a wide range of civil engineering projects for seven municipalities in Southwestern PA.

She has broken barriers in the engineering business as the first female municipal engineer in Allegheny County. As a female executive in a historically male-lead industry, Ms. Omer implemented creative strategies that allowed a boutique local engineering firm to grow into a full service engineering company that ranked consistently among the ENR’s top 500 A/E firms.

Ms. Omer was the youngest graduate of the Pittsburgh Chamber of Commerce Leadership Pittsburgh Program Year VIII. After taking her EIT in college, she went on to obtain her Professional Engineers license from Pennsylvania. She has received numerous accolades for her achievements including the “Pennsylvania State Engineer of the Year” and the “Pittsburgh Business Times Woman of Influence Award,” and is touted as an expert in local government relations and infrastructure systems regional planning and implementation.

After 40 years with Gateway Engineers, Ms. Omer retired and started another consulting firm, Omer Advisors, Inc., where she continues to work in the government relations field.