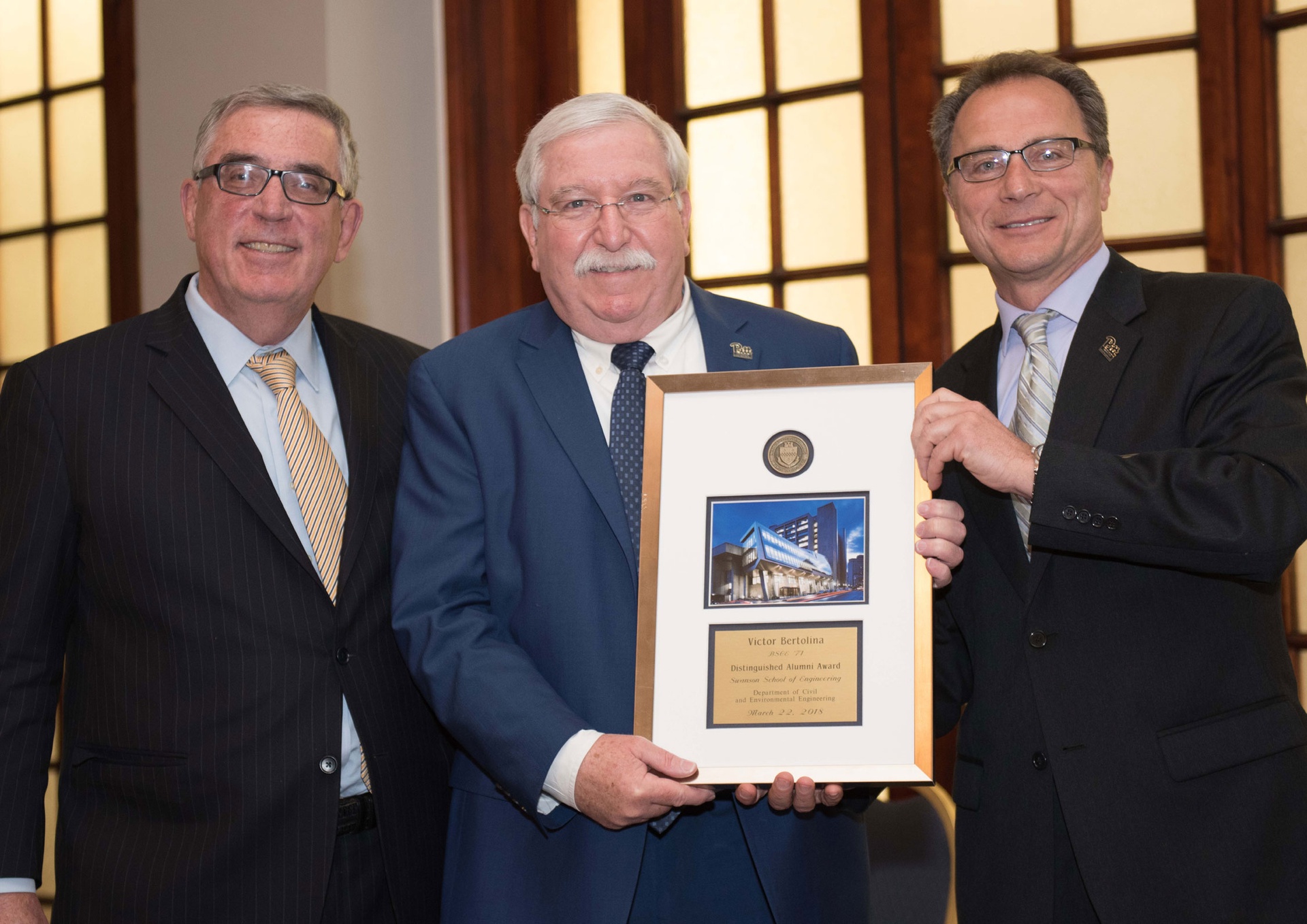 This year’s recipient for the Department of Civil and Environmental Engineering is Victor Bertolina, BSCE ’71, President of SAI Consulting Engineers, Inc.

“After graduating from Pitt in 1971 and earning his commission in the United States Army, Vic worked at the West Virginia Department of Highways and later PennDOT and the city of Pittsburgh as a Bridge Engineer,” said Dean Holder. “This was the springboard to his now 40-plus year career at SAI Consulting Engineers. We applaud Vic for his accomplishments in the field of engineering, and for helping to build bridges that connect us.”

Victor Bertolina graduated from the University of Pittsburgh with a bachelor’s degree in Civil Engineering in 1971 and then received a commission in 1971 in the United States Army as a Second Lieutenant. He worked for the West Virginia Department of Highways as a Civil Engineer Trainee from January to June 1972 before entering Officer Basic Training at Ft. Benning, Ga. In September 1972 he was hired by the Pennsylvania Department of Transportation (PennDOT) and performed a variety of duties including bridge inspection, bridge design, and review of construction documents and inspection reports. Mr. Bertolina left PennDOT in March 1978 to serve as a bridge engineer for the City of Pittsburgh Department of Engineering and Construction.

In 1977 Mr. Bertolina registered as a professional engineer in the Commonwealth of Pennsylvania and subsequently as a P.E. in West Virginia, South Carolina, Michigan, Ohio, Florida, and Kansas. He joined SAI Consulting Engineers, Inc. in June 1979 as a project engineer in the structure department performing bridge inspections, bridge analysis, and bridge design before becoming manager of SAI’s Structure Department. Mr. Bertolina later served SAI as Vice President, Engineering and today as President where he is responsible for the management of all functions and personnel engaged in structure design, highway design, construction inspection, in-depth bridge inspection, and structural analysis.

Mr. Bertolina has been involved with several notable bridge projects in the Pittsburgh region, including the Liberty Bridge, Fleming Park Bridge, Clairton-Glassport Bridge, Wabash HOV Bridge, and the rehabilitation of the 6th, 7th, and 9th Street Bridges.During his military career he was a member of the United States Army Reserve 420th Combat Engineers, rose to rank of Captain, and held the position of Company Executive Officer.

Mr. Bertolina has been a member of the Engineers’ Society of Western Pennsylvania’s International Bridge Conference Committee for more than 25 years. His community involvement includes being a long-term member of the Swanson School’s Department of Civil and Environmental Engineering Visiting Committee, and a past parish council member and Sunday School Teacher at Saint Nicholas Greek Orthodox Church.

He lives in Squirrel Hill with Harriet, his wife of 45 years.