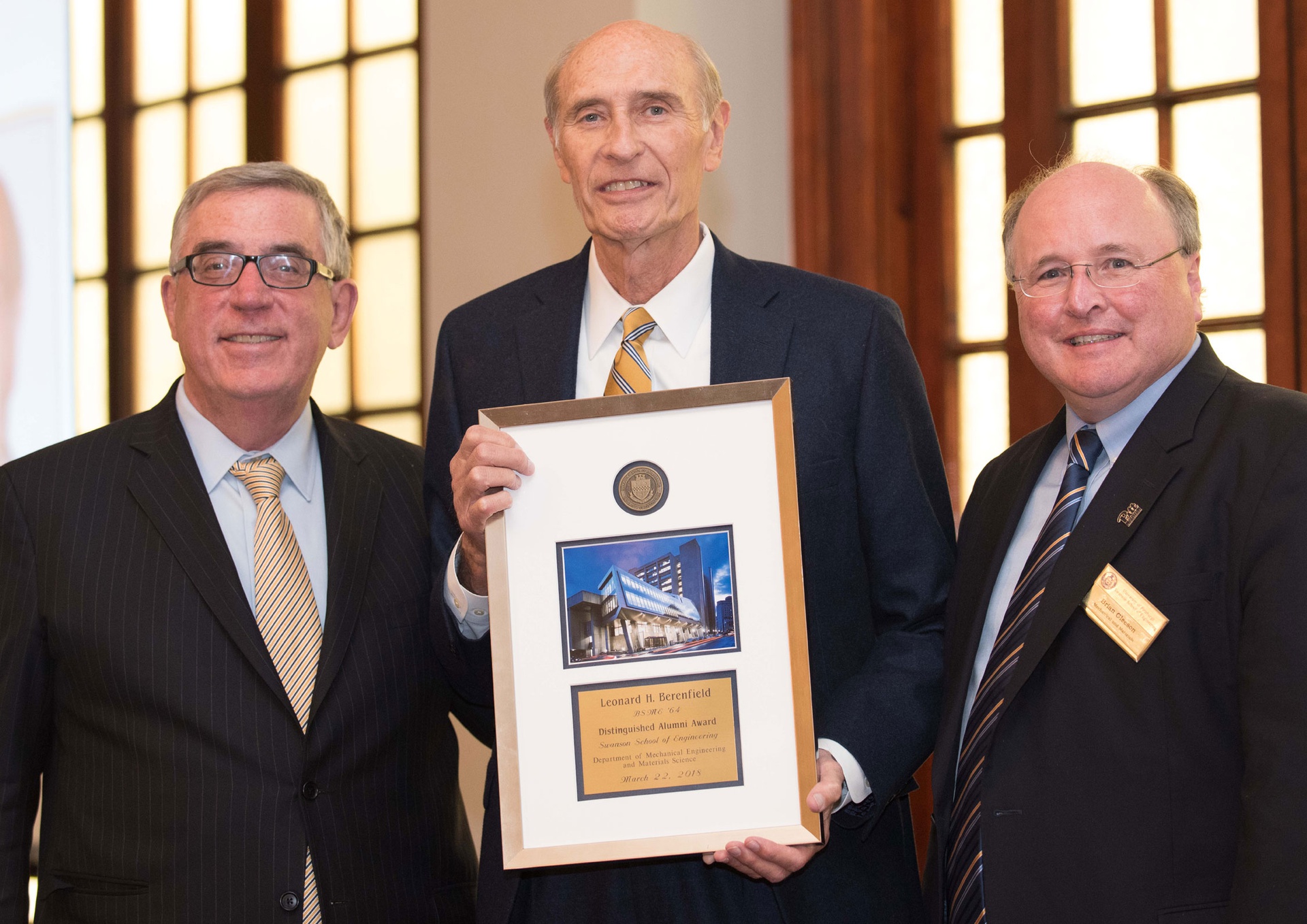 This year’s recipient for the Department of Mechanical Engineering and Materials Science is Leonard H. Berenfield, BSME ‘64, President (retired) of Berenfield Containers, Inc.

“Like many graduates of our Mechanical Engineering program and native Pittsburghers, Len started his career at Westinghouse Electric and the Bettis Atomic Laboratory in Dravosburg. Following a year there however, he would join the family business, Berenfield Steel Drum Company,” said Dean Holder. “The company’s steady growth in Pittsburgh necessitated a move to Cincinnati in the late 1970s where Len directed the construction of a new facility. By 1985, the company would reorganize as Berenfield Containers with Len as President.”

After graduation, Mr. Berenfield worked for one year in the Mechanical Design Department at Westinghouse Electric/Bettis Atomic Laboratory. He left Westinghouse in 1965 and moved to Warren, Pa. to use his engineering knowledge to help grow Berenfield Steel Drum Co. – the family steel drum manufacturing business.

In 1978 he moved to Cincinnati to oversee the construction and operation of the company’s new facility in Mason, Ohio. The firm’s continued growth led to reorganization as Berenfield Containers, Inc. in 1985 with Mr. Berenfield assuming the role of President. A range of industries utilized Berenfield products including food, lubricants, chemicals, and pharmaceuticals. Further expansions of existing plants over the years and the acquisition of plants in Harrisburg, N.C. and Pine Bluff, Ark. as well as new factories to diversify the product line into fibre drums established the company’s legacy. Mauser USA purchased Berenfield Containers in 2016.

Mr. Berenfield is an active volunteer and has held posts in several nonprofit and industry boards including the American Heart Association, the United Way, the Jewish Federation of Cincinnati, Hebrew Union College, the Steel Shipping Container Institute, the International Fibre Drum Institute, and the Industrial Steel Drum Institute.

Born and raised in Pittsburgh’s East Liberty/Highland Park neighborhoods, Mr. Berenfield is the only child of Tillie and Isadore Berenfield. Prior to matriculating at the University of Pittsburgh, he was a pupil in the Pittsburgh Public School District and attended Fulton Grade School. He graduated from Peabody High School in 1961.

Mr. Berenfield married his high school sweetheart, Barbara Gelman, shortly after graduating from Pitt in June 1964 and they were happily joined until her passing in 2012. The couple has two children: a daughter, Joy, who currently resides in Los Angeles; and a son, Greg, who lives in Durham, N.C. Mr. Berenfield’s four grandsons range in age from six to 23 and reside in North Carolina. In 2015 Mr. Berenfield married Ann Gelke Berenfield, MD, a child psychiatrist. In the union he gained a step-daughter, Giuliana; step-grandson, Luca; and step-son, Allesandro.